Mark Knopfler: "Down the Road Wherever"

It’s not unusual for me to buy a new Mark Knopfler album, enjoy it for a few plays, then file it away, thinking, “Another solid album.” I do the same with albums by Van Morrison and James Taylor and Joni Mitchell. But invariably, when I pull any of them off the shelf six months or so later, I find that I enjoy them even more than I remembered. Consistency can make me take certain musicians for granted, only to be reminded, when I play their music again, that their greatness remains undiminished.

Down the Road Wherever is Knopfler’s ninth non-soundtrack solo album, and its first track, “Trapper Man,” opens with a keyboard line from Guy Fletcher before Ian Thomas’s drums hit hard to bring in Knopfler’s familiar, softly distorted guitar. Knopfler tells the story of a trapper, “filth and grease on his clothes and hands,” who brings his wares to a trader. The trapper reminds the trader, who wears “gems and rings,” that it’s the trapper’s dirty work that makes possible his own good life. Knopfler fills the song with unrushed guitar lines that help set the tone for his story.

“Back on the Dance Floor” is as close to a return to the sound of Dire Straits as Knopfler has gotten in his solo career, and its dirty blues is a welcome sound. Imelda May’s backing vocal gives the song a lift, but it’s Guy Fletcher’s keyboard flourishes and Glenn Worf’s solidly funky bass that drive this track. Knopfler is a storyteller, and his guitar solos help establish the background of his narratives instead of being excuses to merely show off. His slide solo in “Just a Boy Away from Home” glides from the blues into a long quote from Rodgers and Hammerstein’s “You’ll Never Walk Alone” that gives this performance emotional focus.

Knopfler ventures into new territory with the easy funkiness of “Nobody Does That,” which has a terrific horn chart reminiscent of the Average White Band and a gritty sax solo by Nigel Hitchcock. Tom Walsh’s muted trumpet intro to “When You Leave” leads to some romantic crooning from Knopfler, whose voice continues to grow more fluid and expressive with age. The calypso soul of “Heavy Up” is also aided by a strong horn arrangement, and a deft, understated vocal from Knopfler. 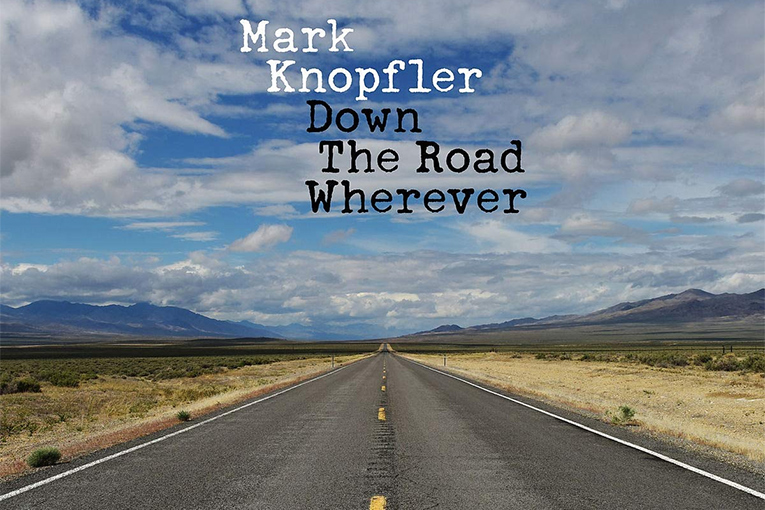 Knopfler is adept at spinning tales, and two of the strongest on Down the Road Wherever are also the album’s most personal. “One Song at a Time,” from which the album gets its title, contains memories of Knopfler’s travels as a musician, absorbing history and experiences to use in his songs. “Matchstick Man” grew out of a memory of hitchhiking home after a gig -- with only his voice and acoustic guitar, Knopfler paints a picture of a young musician making his way in the world.

Many of the musicians on Down the Road Wherever have often worked with Knopfler before; there’s an ease and professionalism in the sound of this album that, on first hearing, might feel too laid-back. But repeated listenings reveal more depth in the arrangements, more subtle interplay among the players. And Knopfler always uses his considerable guitar skills in service to his songs. The quote from “You’ll Never Walk Alone” first struck me as sentimental, but after I’d listened a few more times, I found that it underlined and strengthened the feeling of hope contained in the song’s closing lines.

Knopfler and Fletcher coproduced and recorded the album at Knopfler’s British Grove Studio, which prides itself on using a mixture of old and new audio technologies. The sound is clean and expansive, with a broad soundstage that provides plenty of breathing room for all of the instruments and voices. At this point Mark Knopfler has nothing to prove, but Down the Road Wherever is proof that he’s not coasting -- it’s another impressive entry in a rewarding discography.