Blue Note’s web page for its vinyl initiative, which began in March 2014, includes this hopeful statement from label president Don Was: “Although this program begins in celebration of Blue Note’s 75th Anniversary, our catalog runs so deep that we will faithfully be reissuing five albums a month for many years to come!” While I certainly hope this will turn out to be true, as I write this review in mid-December 2015, I don’t see any listings for releases after November 20. Since LP sales for 2014 totaled 14 million, there’s reason for the label to continue mining its deep catalog for more vinyl.

One of those November releases was vibraphonist Bobby Hutcherson’s third album as a leader: Happenings, a 1966 recording that came in a jacket colored a uniquely eye-catching hot pink. Hutcherson was joined by pianist Herbie Hancock, double bassist Bob Cranshaw, and drummer Joe Chambers. Hancock and Chambers had both appeared on Hutcherson’s previous LP, Components (1965), which included four challenging compositions by the drummer. 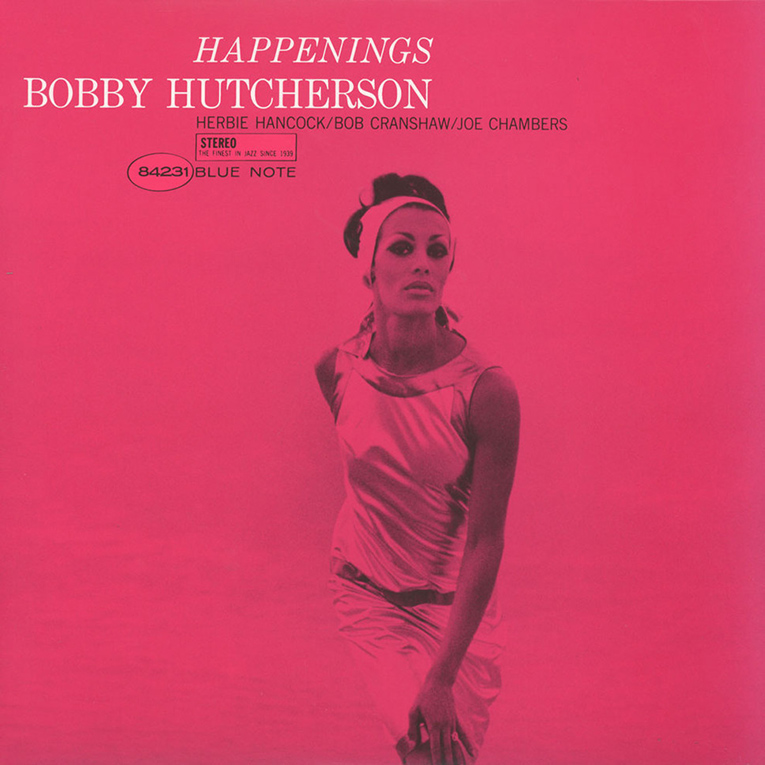 Some of the avant-garde feel that Chambers established with his tracks on Components is carried over here in Hutcherson’s “Aquarian Moon,” in which unusual, sometimes dissonant chord changes establish a slightly unsettling mood. Hutcherson always resolves the free-jazz sections by returning to the accessible opening theme, and he and Hancock play solos that carefully balance the tune’s more out-there impulses with melodic sections that help listeners find their way back.

“The Omen” is another unusual piece that creates a sense of dread and tension that is released by Hutcherson’s cleverly built marimba solos. “Bouquet,” a lovely modal ballad, ebbs and flows with delicate solos from Hutcherson and Hancock, aided by sympathetic brushwork and cymbal washes by Chambers. “Rojo” moves briskly along with a Latin jazz flavor, Chambers again helping set the mood.

Hutcherson’s vibes give the arrangement of Hancock’s “Maiden Voyage” a lighter, more airy feel than in Hancock’s original recording, and his solo is well constructed and engaging -- but Hancock’s own recording of the tune, made the previous year, is so powerful that this version is little more than an interesting alternative. It’s the only track on Happenings not composed by Hutcherson, and the two that remain -- the quick, boppish “Head Start,” and the gentle “When You Are Near” -- are memorable songs that help contribute to an album that is focused, intelligently paced, and stylistically varied. 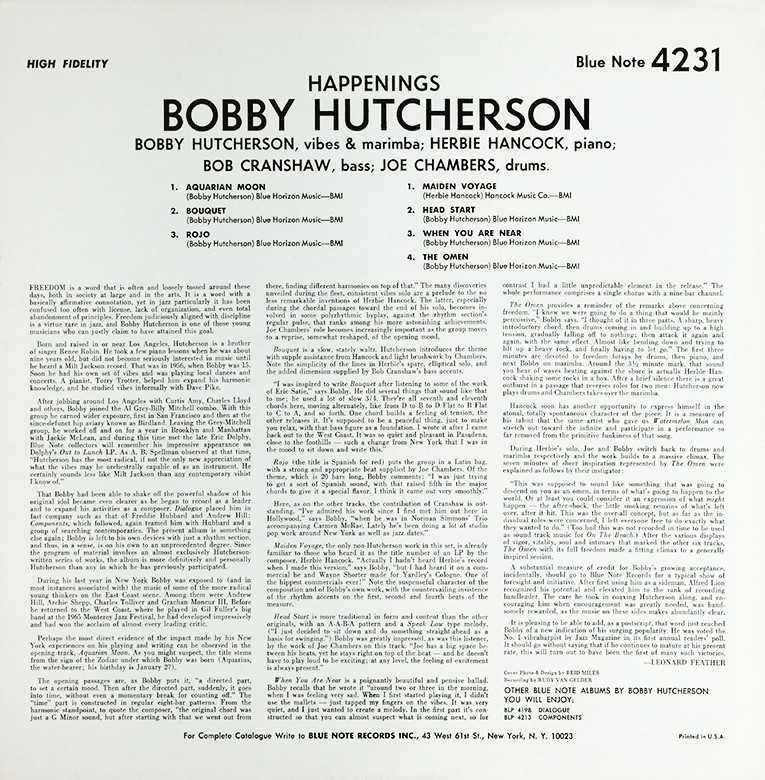 The sound captured by original engineer Rudy Van Gelder was exciting and detailed, and his 2006 remastering of Happenings for CD release is well balanced. Some RVG remasters strike me as too compressed and tipped up, but Happenings is a very pleasant listen. Bernie Grundman’s mastering of this new vinyl edition, based on a high-resolution digital master, is warmer than the RVG CD, and Hutcherson’s vibes have a rounder, less glassy tone. Chambers’s cymbals are not as forward on the LP, and Hancock’s piano sounds more open and less emphatic. Bob Cranshaw’s excellent bass playing is somewhat recessed in both formats, but has a little more bounce on this new LP.

While Blue Note has evidently put its vinyl release schedule on pause, I’m hoping the label will soon return to regular reissues. I’ve bought 15 of them for myself, and another five or so for friends. As I noted in another review, the series has had some problems of quality control, but overall, the pressings have been good. Perhaps Blue Note is looking for another pressing plant, or is asking its current plant to put things right. Whatever the reason for the gap, I hope it’s brief. There are many more albums in the Blue Note catalog that would be great to see on vinyl again.