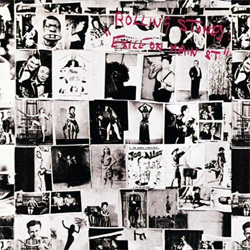 When the Rolling Stones released Exile On Main Street in 1972, critical reception was lukewarm. Reviewing the album in Rolling Stone, Lenny Kaye wrote, "Exile On Main Street appears to take up where Sticky Fingers left off, with the Stones attempting to deal with their problems and once again slightly missing the mark." But fans disagreed, and Exile hit number one on the charts in both the US and the UK. It repeated that feat 38 years later, when Universal Music, the band's current label, issued this remixed (by Bob Clearmountain) and remastered (by Stephen Marcussen) version in May.

Universal has decided to get the most out of its investment in the Stones by releasing Exile in several formats. There's the single CD with the original 18-track line up; a deluxe edition, which includes a second disc of previously unissued material; a vinyl edition; and a super deluxe edition, which bundles together the original two LPs, the two-disc deluxe set, a DVD, and a bound book with photos and an essay. The Stones, unlike Bono and Sting, don't want to change the world. They just want to lighten its pockets.

The second disc of the deluxe set comprises ten tracks from the sessions that produced the original LP, although there was some post-production sweetening in preparation for this release. "Pass the Wine (Sophia Loren)" sets up a fine groove, "I'm Not Signifying" is a solid blues workout, and "So Divine" features a clever quote from "Paint It Black" that the band quickly subverts. "Plundered My Soul" comes close to matching the greatness of the original album, although there's nothing here that cries out for inclusion in the original lineup, including the alternate takes of "Loving Cup" and "Soul Survivor." But it's nice to have them just the same.

As for the sound, it's loud and fatiguing. At first listen, it seems like an improvement over past issues. Clearmountain has cleaned up some of the instrumental tracks, resulting, in one instance, in better separation of the horns on "Rocks Off." A side-by-side comparison with Bob Ludwig's 1994 remaster for Virgin Records, however, reveals that the instruments and vocals on the new version have been slammed forward in the mix, so that Charlie Watts's kick drum is indistinct in a wall of bright sound. The background vocals on "Tumbling Dice" are right beside Mick's lead, and throughout the disc all of the elements of the recording seem to be fighting for attention. Lowering the volume helps, but Ludwig's earlier mastering job is overall more musical and subtle.

I also picked up copies of Tattoo You and Some Girls from the Universal remasters series of the Stone's post-Decca recordings. But they were plagued by the same compression and overemphasis of the high frequencies, so I sold them and picked up used copies of the Virgin Records reissues, all mastered by Ludwig. Stones completists will want this version of Exile for the bonus disc, but they'll prefer listening to the original in the Virgin Records edition or, better yet, on vinyl.