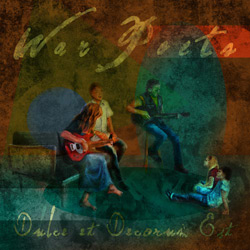 Five Minneapolis musicians comprise the band War Poets, but Rex Haberman, a longtime songwriter with three discs to his credit, is at the center of the band’s debut album. Haberman wrote or cowrote all 17 songs on Dulce et Decorum Est. Even a casual listen, however, reveals how important collaboration was to this two-disc set. Matt Kirkwold and Jenny Case helped with some of the songwriting, and played, respectively, guitar and bass. Coproducers Kevin Bowe and Stephen McKnight also share a couple of bylines with Haberman, and play guitar.

Bowe’s studio is in Minneapolis, McKnight’s in Philadelphia. Musicians from both cities appear on various tracks here, but the album doesn’t seem scattered or inconsistent. Its Minneapolis pedigree is immediately obvious in the crunchy guitars and melodic hook of the first tune, "Don’t Look Back." Ironically, McKnight produced this track, but its attitude and influence echo the Replacements. Drummer Matt Curran hits hard, and guitarist Matt Kirkwold brings the tune the right mix of finesse and distortion. Case’s harmony vocal in the chorus gives a velvet touch to the song’s slightly hard edge.

Case takes the lead vocal in "Another Lie," an up-tempo rocker to which she also contributes an impressively fluid bass line. Alison Scott and Haberman duet in "Dominica’s Been Sent," and Scott’s singing has a new-country ring that should widen the track’s appeal. The song’s crossover potential seems calculated to sell, but clever playing and a good arrangement save it from being ordinary. In fact, the playing throughout is first rate, and "Good Company" showcases a band that can rock’n’roll. Neale is especially impressive here, but he’s a player of such consistency and good ideas that each solo he takes brings focus to the track it’s part of.

Disc 2 is softer and heavier on ballads, to which the players easily shift gears. Case has a gentle feature in "Partly Naked," the best of the seven tunes on this disc. Haberman is a good rock singer, but he’s also fully convincing in ballads. Still, the album’s rock half is more consistent overall -- a single, cherry-picked disc that included the ballads "Partly Naked" and "Deep Blue" would perhaps have been more effective.

Bruce Templeton mastered Dulce et Decorum Est and it flows together well, but I preferred McKnight’s Philadelphia recordings for their visceral punch -- Curran’s drums ring out hard, and Case’s bass has better definition than in the Minneapolis tracks. The lead vocals are well out in front throughout, and instruments are clearly presented, but McKnight leans toward filling the soundstage, which gives his recordings their impact. The tunes Bowe produced are more country-rock in flavor, so his lighter touch is appropriate there. I just prefer this album’s harder-rocking songs.

Dulce et Decorum Est is self-released, but you can find it at CD Baby and Amazon, and can download it at iTunes. You can also find two videos by the band on their beautifully designed website.