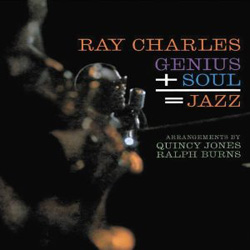 Ray Charles invented soul music in the 1950s, and he made country music his own for a while in the '60s, but he always kept his hand in jazz. When he was with Atlantic Records, where he made the great rhythm and blues sides that propelled him to stardom, he recorded a number of jazz albums, including two with vibraphonist Milt Jackson. When he left Atlantic in 1960 for ABC Records, one of his first projects was a big-band jazz album for Impulse!, the label's jazz subsidiary. Genius + Soul = Jazz was similar in conception and personnel to The Genius of Ray Charles, his 1959 recording for Atlantic. Both records alternated between Ralph Burns and Quincy Jones for the arrangements, and both employed members of Count Basie's orchestra for roughly half the tunes, the balance being played by a band composed of great session players.

Charles plays the Hammond organ on Genius + Soul and sings on two tracks. Woody Herman originally cut a hot version of "I've Got News for You," and Edgar Winter's White Trash later did a fine job with it, but the definitive recording is Charles with the Basie band in full swing playing a smoking Burns chart. Quincy Jones's arrangements for the session band are just as incendiary, especially behind Charles's vocal on "I'm Gonna Move to the Outskirts of Town." Charles plays some fine solos in the style of Wild Bill Davis throughout the ten tracks on Genius + Soul, and Rudy Van Gelder's recording captured the dynamics of the big-band arrangements. I compared this new remaster with Steve Hoffman's 1988 work for DCC and found the new version to be a little punchier overall, with perhaps a hint of compression, but otherwise both discs were mastered tastefully.

If you already own Genius + Jazz, you may want to buy this expanded edition anyway. Concord has added three other titles, My Kind of Jazz (1970), Jazz Number II (1972), and My Kind of Jazz Part 3 (1976), all of them big-band recordings featuring charts by Teddy Edwards, Jimmy Heath, Roger Neumann, and Alf Clausen. The bands feature Johnny Coles, Blue Mitchell, David "Fathead" Newman, and many other great musicians. Charles sings on one track, "Booty Butt," on My Kind of Jazz, but the remaining tracks from all three releases are instrumental, with Ray's piano as the subtle foundation. The arrangements are all exciting and dynamic, especially "Our Suite," an eight-minute track from Jazz Number II credited to Charles and Roger Neuman. Other highlights include strong interpretations of two Horace Silver tunes, "Senor Blues" and "Sister Sadie" and three bossa nova tracks, including Luiz Bonfá's "Manhã de Carnaval."

The CD booklet contains reprints of the original liner notes and cover art for the albums, plus excellent new notes by Will Friedwald. These four titles are excellent examples of big-band jazz by an American master, and Concord has done a first-class job of packaging them.