Elvis Costello’s recording career is remarkable for its variety and consistency. It’s hard to name a single bad album in his discography. Even Goodbye Cruel World (1984), which Costello himself dislikes, has some good moments, and that record is pulled down more by the production than by the songs or performances themselves. Some of his albums of the last ten years, however, have shown an occasional tendency to go for familiar melody lines or chord changes, and it was possible to wonder if he was beginning to lose steam.

Look Now is Costello’s first studio album with his backing band, the Imposters, since Momofuku (2008), and it’s clear that his songwriting skills are fully intact. It also shows him in strong singing voice, backed by musicians who give him masterful, often inspired assistance. “Under Lime” has the kind of easy-flowing melody that Costello seems to come up with effortlessly, but it feels fresh and exciting. Costello’s arrangement for horns and voices evokes both Motown and Broadway, and gives the song a grand, theatrical flair.

“Don’t Look Now,” one of three collaborations with Burt Bacharach, is uncluttered in execution, with 90-year-old Bacharach on piano behind Costello and the Imposters providing tasteful help. The simplicity of the accompaniment puts the focus on Costello’s beautifully modulated singing. Bacharach doesn’t play on another track he cowrote, “He’s Given Me Things,” but the Imposters can handle anything Costello throws at them, and Steve Nieve’s electric and acoustic keyboards give this song a sophisticated tone that blends well with Costello’s string arrangement.

Costello has always had a firm command of many pop-music genres. The Motown rush of “Mr. and Mrs. Hush” is propelled by Davey Faragher’s popping bass line and Costello’s glowing horn chart. Nieve’s piano and Vox Continental organ give “Unwanted Number” a Brill Building vibe reinforced by the lively background vocals. “Dishonor the Stars” features a rich arrangement for the Imposters, further enriched by a vibraphone line from Costello that hints at Dionne Warwick’s singles for Scepter and Wand in the 1960s. 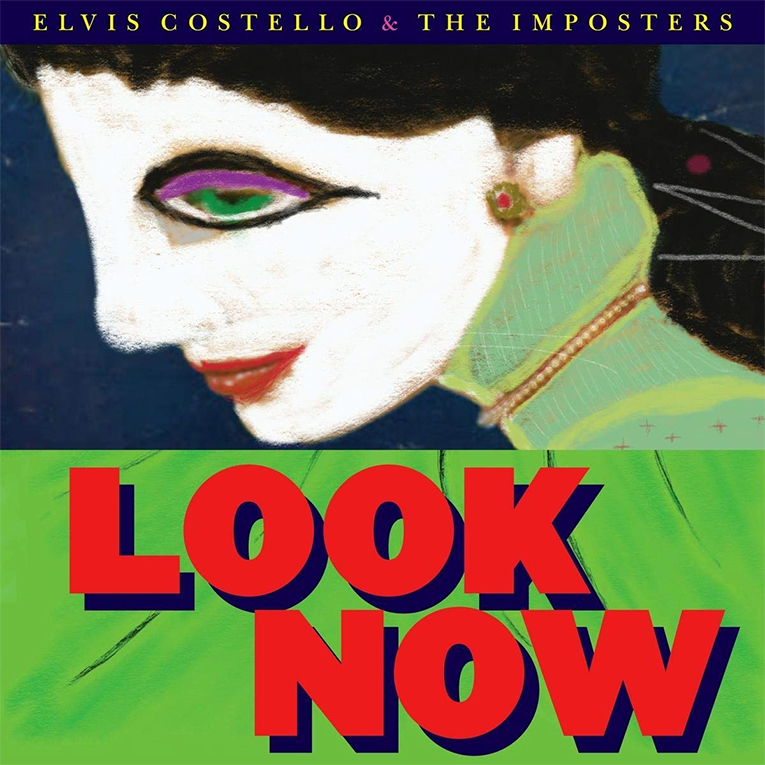 Costello’s distinctive songwriting and singing ensure that nothing on Look Now sounds derivative. While it’s true that working with Bacharach brings out Costello’s streak of pop romanticism, he retains all of his identity, especially as a lyricist. The collaboration with Carole King, “Burnt Sugar Is So Bitter,” shows an appreciation for King’s great run of songs in the 1960s, but it’s Costello’s style that predominates.

Some of these songs have been around a while. The three collaborations with Bacharach are from a never completed musical, and the song cowritten with King is 20 years old. All four fit in stylistically with the other tracks on Look Now, their lyrics helping to shape a narrative about the complexities of love and other dangers. Some songs, such as “Stripping Paper” and “He’s Given Me Things,” are sung from a woman’s point of view, and Costello carries this off with sensitivity and without condescension. The lyrics throughout Look Now show Costello’s usual talent with words, but he aims for clarity rather than cleverness.

The Imposters are nimble and assured, playing in a dizzying number of styles with ease and grace. Keyboardist Steve Nieve and drummer Pete Thomas have been with Costello since 1978, and bassist Davey Faragher joined him in 2001. At this point their ability to conform to the needs of each song is telepathic, though Costello’s skills at scoring those needs on paper has grown considerably over the years. He wrote the string, horn, and/or vocal arrangements for almost all of these tracks, and the results give the music a high level of complexity and urbanity. And his guitar work throughout is, as always, first rate.

Costello and Sebastian Krys produced Look Now and it’s a recording that’s packed with instrumental details, which come through well. I might have pulled Faragher’s bass back just a hair, and I found that lowering the volume a little gave the music more subtlety -- in short, a little less compression would have made for a better listening experience.

The Deluxe Edition includes a second CD -- a four-track, 15-minute EP -- but it’s the main course you’ll be listening to most. After 40 albums in 40 years, Elvis Costello can still surprise with a well-turned phrase and a great melody.