Judy Wexler: "What I See" 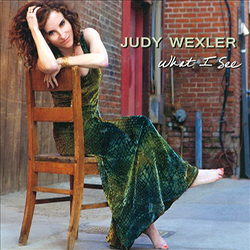 Judy Wexler has released only four CDs since 2005, when she debuted with Easy on the Heart, but she has a solid reputation among jazz critics and other musicians. She is also an actor who has appeared on television and in the theater, and that background perhaps accounts for her ability to capture the meaning of a song and tell its story. She hits the right emotional notes to give listeners a sense of what a song is telling us, and her skills as a jazz singer give her interpretations rhythmic excitement and unpredictability.

She also has a knack for choosing tunes that should be better known and, since they haven’t been widely covered, the results are fresh and lively. Her newest disc, What I See, looks to writers as disparate as King Pleasure and film composer John Williams. “Tomorrow Is Another Day” is as jaunty as Pleasure’s original, but Wexler adds a touch of hopefulness to his realism, with Bob Sheppard’s bass clarinet adding a slightly dark hue.

Williams’s “The Long Goodbye” is from his score for Robert Altman’s film adaptation (1973) of Raymond Chandler’s novel. The version I know best is Jack Sheldon’s, featured in the soundtrack, which has its own wry charm. Wexler brings more nuance to Johnny Mercer’s lyrics, however, and when she sings “when a missed hello becomes a long goodbye,” there’s a feeling of longing and a hint of tragedy that Sheldon’s version lacks. Ron Stout’s beautiful flugelhorn solo adds some tension, and, with the help of pianist Jeff Colella’s chord splashes, helps evoke the dark beauty of Chandler’s L.A.

Wexler resurrects another gem, Jerry Merrick’s “Follow,” best known from Richie Havens’s version on his album Mixed Bag (1967). Wexler can reinvigorate a pop tune and remind us why it grabbed us in the first place. She bravely takes on “A Kiss to Build a Dream On,” a song associated with Louis Armstrong, and the result is both moving and true to the original. Larry Koonse’s ukulele playing helps set the mood, and Scott Whitfield’s fluid trombone solo brings the slightly old-fashioned arrangement into focus.

Jeff Colella co-produced and arranged What I See, and the musicians bring variety and taste to the charts he gives them. They get a chance to show their chops expansively in “Tomorrow Is Another Day” and “Follow,” but in many tracks, their short solos are focused and effective. The musicians lock together effectively throughout, as in Rickie Lee Jones’s “The Moon Is Made of Gold,” where Koonse on guitar and Stout on flugelhorn underscore the tune’s warm ease. In the end, however, this is Wexler’s album, and she can sing a line like “love is too quixotic / an erotic treasure chest,” from “Convince Me,” in a way that crystalizes the song and makes it hers.

Talley Sherwood engineered What I See, and it has an exciting, polished sound, though I occasionally wished for some analog warmth. Sherwood has a good ear for microphone placement, however, and the instruments are arrayed intelligently behind Wexler, whose voice is razor sharp and centered. This is my second review of a Judy Wexler disc and it confirms my feeling that she deserves comparison with the very best jazz singers working today.