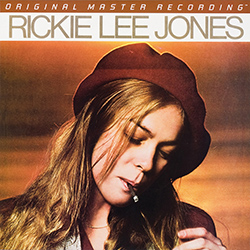 I first saw and heard Rickie Lee Jones on Saturday Night Live, in April 1979, when an appearance on that show could make a musician’s career. Her eponymously titled debut album had been released only a few weeks before, and that night she became a sensation. “Chuck E.’s  in Love,” one of the songs she performed that evening, went on to hit No.4 on Billboard’s Hot 100, and her album sold over two million copies. Her music had hints of jazz, R&B, folk, and Tin Pan Alley, and Rickie Lee Jones was the beginning of a recording career that would be marked by quality and unpredictability.

My copy of the original LP is so old that on its inner sleeve is a coupon for ordering a two-record set called Limo. Beginning in the late 1960s, Warner Bros. Records released several dozen promotional samplers, most of them two-LP sets, available by mail-order for $1 per disc and comprising tracks by artists on Warner’s various labels. I have several of those sets, and they were terrific. The sequencing was always done well, the liner notes were clever, and you could discover music you didn’t know much about. A time when a major label was willing to offer a two-LP set for two bucks that could help you discover new music was also a time when that same label would sign a hard-to-peg musician like Rickie Lee Jones.

When I played my CD of Rickie Lee Jones in preparation for this review, I thought it sounded pretty good. But when I switched to the original LP, the finger snaps and background vocals sounded more natural. MoFi’s new LP is even more striking in its presentation of the music. The marimba that accompanies Jones’s acoustic guitar in the opening is easier to hear, and the acoustic guitars layered throughout the song are better separated. Steve Gadd’s drum roll at the end of the bridge rings out with more authority, and the reverb around the finger snaps is in sharper relief and sustains longer than on my other two copies.

Jones’s voice in “On Saturday Afternoons in 1963” is much more holographic and realistic on the MoFi than on the original LP or CD, and the piano that accompanies her in the opening verses has more openness and life. The bass in “Night Train” is snappier on the MoFi -- it sounds a little lifeless on the CD -- and the acoustic guitars ring out so that I can hear the harmonic qualities of the chords. The strings in Nick DeCaro’s arrangements for both of these tracks have more richness on this LP as well.

The bass and hi-hat set the tone of “Danny’s All-Star Joint,” and on the MoFi they have more sparkle and clarity, as does the electric piano that enters after the first verse. The kick drum is more exciting and gives the track more foundation on this pressing. The elements that make “Coolsville” so haunting, from the chorused guitar at the beginning to the dynamics of the piano, are in greater definition on the MoFi. Each instrument has more space to itself, more room to make its point, and Jones’s voice, bathed in a hint of reverb, is in the room with the listener in a way it isn’t with the CD or the original LP.

One of the album’s most moving tracks is “Company.” Johnny Mandel’s orchestral arrangement highlights Jones’s voice, and on the new LP the strings are full and luxurious. Throughout this pressing, I found myself being pulled into great details I hadn’t noticed before, such as the dynamics in the horns in “Weasel and the White Boys Cool.” In his mastering for MoFi, Krieg Wunderlich has taken a good recording and let it breathe fully, with the results of more inner detail, more dynamic range, and a more involving soundstage.

The reproduction of the cover art is one of MoFi’s best, and the pressing is up to RTI’s usual high standard. I know that Mobile Fidelity Sound Lab has also pressed Jones’s second album, Pirates, on vinyl. I have to get a copy.