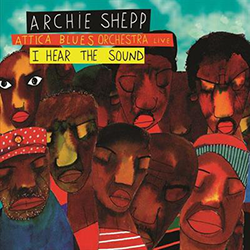 On September 9, 1971, prisoners at Attica State Prison, in upstate New York, took control of the facility to demand better living conditions. When state police and the New York National Guard regained control of the prison four days later, ten hostages and 29 prisoners died in the gunfire. Over 50% of the prison population was African-American, and had acted, in part, out of anger over the death of prison activist George Jackson in California the previous month.

Jazz saxophonist Archie Shepp was moved by the Attica incident, and a few months later, in early 1972, he recorded the music released later that year as Attica Blues (Impulse!), including “Blues for Brother George Jackson.” Although Shepp is often considered an avant-garde or free-jazz musician, he had been introducing funk and other elements into his music, and Attica Blues was as accessible as it was angry and powerful. In 2012 and 2013, Shepp and his Attica Blues Orchestra recorded tunes from Attica Blues during performances in France. He and that ensemble expand on the original album’s ideas to create the fresh, vibrant interpretations heard on I Hear the Sound.

“Attica Blues” opens both discs, but the newer version is tighter and funkier, with Reggie Washington’s slap bass playing a prominent role. Shepp’s pungent soprano sax and impassioned lead vocal give the song its heart, and its message will still ring true for many listeners. The orchestra plays with conviction, driven along by drummer Famoudou Don Moye. The slightly renamed “Blues for Brother G. Jackson” is taken at a slower pace than the original, and adds a vocal. The Attica Blues Orchestra is larger than the group Shepp led in 1972; it gives the tune an appropriately grand scale, and Shepp’s acerbic tenor-sax solo expresses passion and indignation.

Shepp has changed the running order, which might throw anyone who’s committed the original LP to memory, and the fresh new arrangements lift some tunes from their strong ties to a ’70s sound. Romulus Franceschini’s string arrangement for “Steam” is less time bound and more subtle in this new performance. Also recorded here are tracks from other Shepp LPs: “The Cry of My People” (1972) and “Mama Too Tight” (1966). Each is close to its original, and both show how relevant Shepp’s music has remained over the years.

Jimmy Owens conducts the arrangements -- by Shepp, Franceschini, Jean-Philippe Scali, and others -- and maintains tight control of the orchestra while creating strong senses of spontaneity and dynamics. The recording is luxuriously deep, presenting both the scale of the orchestra and the dimensions of the concert halls.

Although Attica Blues was made so close in time to the events that inspired it, its compositions retain their power more than 40 years later. I Hear the Sound doesn’t just revisit a long-ago moment in Archie Shepp’s career -- as the liner notes remind us, many of the problems that drove Shepp to speak out remain problems, and the music he wrote to confront racism and injustice still has the power to move us.