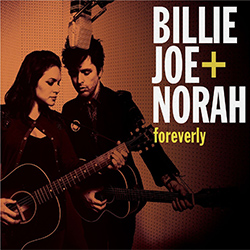 I'd never heard the Everly Brothers before I bought this album, nor had I heard of them. But given that the brothers born in Kentucky and Illinois enjoyed a career that featured 35 Billboard Top 100 singles, including 26 in the Top 40, and a Grammy Lifetime Achievement Award, I feel sheepish about admitting as much. Having done some research on the pair, I wouldn't have naturally associated Billie Joe Armstrong, lead singer of punk-rock group Green Day, and singer-songwriter Norah Jones with them. Yet on the appropriately named Foreverly, the tandem recreates the legendary brothers' second album, Songs Our Daddy Taught Us. That 1958 release comprised a selection of songs that the boys had -- bear with me here -- learned from their father. Given that the pairing's popularity and commercial success owed to their billing as a rock 'n' roll act, it's fair to say that the album was a departure.

Luckily, Foreverly is anything but. The late-'50s remake opens with "Roving Gambler," and it's pleasing to hear just how close to the original Billie Joe and Norah come -- reimagining this is not. The tempo is identical, yet it feels more substantial, more tangible than the airier original. The recording is sensational, with both vocalists, along with the adjoining harmonica, sounding terrific with excellent weight and resolution. While recording quality has surely come a long way in 55 years, the intimacy of this rendition makes for a more engaging record than its forebear. So, too, with "Who's Gonna Shoe Your Pretty Little Feet?" It's closely miked, and Jones's vocals add a complementary dimensionality to the singer's gentle lyrics. Preserved for posterity are a multitude of nooks and crannies in the recording, with guitar finger work and creaking strings giving the song a genuine, unmolested, live feel.

"Lightning Express" allows Jones to feature more prominently, and her sultry voice nicely complements Armstrong's lighter, more wispy vocals. Adding to the cozy feel of the tune, and deviating from the original, is Jones's unmistakable piano work. While the resultant feel of the piece accordingly differs, it works quite well. It's at once more methodical and fulsome than the Everly Brothers' rendition, but also more explorative, with a tinkling xylophone adding a welcome playfulness to the track.

While I rarely had the impression I was listening to two fabulously popular performing artists, Armstrong's Green Day roots shine through on "Barbara Allen." Which is fine, of course. Had this been a straight-up imitation of Songs Our Daddy Taught Us, then it would not make for nearly as interesting a proposition. Jones exhibits greater range here, extending a bit higher than many are likely used to hearing her. There's excellent stereo separation, with Armstrong sounding from the center-right of the stage, while Jones is farther back and to the left-center, her voice resonating in the recording space. A fiddle lazily croons from the left throughout the cut, offering a thoroughly folksy foundation.

The balance these two talented musicians strike on Foreverly, paying a lengthy and substantial homage to the legendary siblings while delicately applying their own signature touch, works splendidly. The homey recording is rich with detail and imperfection, and fans of the original will find greater texture and tonal color to explore. It's a dynamic perspective on a classic, and definitely worth checking out.