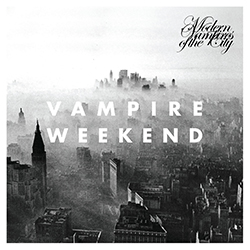 I imagine that anyone buying Vampire Weekend’s eponymous first album because the band’s name evoked something sinister would have been disappointed. Their music is unusually upbeat, even bouncy. “Cape Cod Kwassa Kwassa,” a single from that disc, is a good place to begin. The song is a combination of Western and African pop, the exotic influences defining and focusing the infectious melodies. Vampire Weekend’s unique sound made them an unlikely choice for a spot on Saturday Night Live, but college-radio play and Internet buzz worked together to make them fan and critic favorites.

It helped that they write artfully crafted songs filled with literate and fun, if occasionally arcane, lyrics. The band members met while attending Columbia University, and they’re a good advertisement for a liberal arts education. Their new release, Modern Vampires of the City, moves away from the world-music influences of the first two albums, but they’ve retained their tendency to write songs that stick in the mind. The first CD single, “Diane Young,” is a little noisy, and I could have done without the Auto-Tune, but the melody is undeniably catchy.

That single also included “Step,” which is as delicate as early Simon and Garfunkel and even includes an electronic harpsichord. Despite that, the song sounds current, in part because it quotes, recycles, and even subverts “Step to My Girl,” by the Oakland hip-hop group Souls of Mischief. That Vampire Weekend has remade for their own purposes a hip-hop song that sampled Grover Washington covering a song by Bread is almost more postmodern than I can bear, but the result is charming and ethereal.

A quick Google search reveals among fans a healthy obsession with trying to figure out what co-writer (with Rostam Batmanglij) Ezra Koenig means in lines like “I used to front like Angkor Wat, Mechanicsburg, Anchorage, and Dar es Salaamwhat.” I’m still not sure, but the message of “Unbelievers” about the afterlife, and what we on earth think about it, is clear and profound. “Ya Hey” also looks at God and religion, this time with awe and puzzlement. Koenig is not yet 30, but themes of age, death, and the afterlife run through Modern Vampires of the City.

Despite those themes, the album is playful, not sad or morbid. It’s filled with the sounds of musicians who’ve discovered how much fun they can have in a recording studio. Sound effects, tape manipulation, processing, doctored drums, and more give the music a layered complexity you can lose yourself in. Only occasionally do those tricks become precious -- depending on your mood, the strangely morphed voices in parts of “Unbelievers” will sound clever or annoying.

Vampire Weekend made a point of giving Modern Vampires of the City a warm, analog sound by using a mixture of newer and older recording technologies, such as vintage microphones and Ampex tape machines. The resulting sound is luxurious without the distancing coldness that can result from an overreliance on technology. At times on this record, the band sounds a bit too enamored of its own accomplishments, but I keep coming back and hearing new things to like. I think I’ll be saying that for a while.