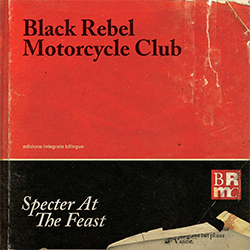 Black Rebel Motorcycle Club’s new disc, Specter at the Feast, includes a version of the Call’s 1989 hit, “Let the Day Begin.” Michael Been, the Call’s bassist, singer, and primary writer, was the soundman and an occasional producer for BRMC. He died in 2010 of a heart attack backstage, during a BRMC performance in Europe, and his loss is a current that runs through this record. Been’s son, Robert Levon Been, is BRMC’s bassist and one of its singers.

Although the pace is varied by several rockers, including three placed roughly in the middle of the album, it’s the slower, more introspective tunes that predominate. “Fire Walker” sets the tone, guitar harmonics and electronic keyboards creating an elegiac backdrop. Been’s distorted bass plays against the keyboards, and simple but effective drumming from Leah Shapiro. Been’s voice carries a hint of melancholy as he sings, “Your eyes have wept a thousand tears / You never needed mine / The crime is never what you steal / But what you leave behind.”

The tempo is livelier in the Call’s “Let the Day Begin.” Shapiro and guitarist Peter Hayes capture the song’s grand majesty, but BRMC’s fuller sound and harder edge, along with Been’s heartfelt singing, invigorate and refresh it. It’s a celebration of Michael Been’s accomplishments and legacy.

Many of the best songs on Specter at the Feast build slowly, to strong effect. “Returning” deftly mixes sadness and triumph, Hayes creating a dense, complex wall of sound. “Lullaby” grows layer by layer, with guitars, keys, and Been’s bass intertwining in a great, emotional climax. Shapiro’s support in both songs is restrained and very effective -- she doesn’t call attention to herself, but adds the right touches for each song. When BRMC rocks, though, they come out punching. Hayes tears off great chunks of guitar in “Hate the Taste,” Shapiro slamming the drums hard behind him as Been holds down the center.

The sound is thick -- it takes a while for some of the best details in these songs to come through. The dense mix of “Teenage Disease” probably won’t appeal to audiophiles, but there’s no denying the song’s power, or the feeling that a cleaner recording might not have been as effective. The cleaner sound of the bluesy “Some Kind of Ghost” allows the spectral quality of Hayes and Been’s vocal harmonizing to come through. In the end, however, the cumulative effect of Specter at the Feast comes from its emotional power, conveyed in deep layers of sound that pull you in and envelop you.

Perhaps it’s the knowledge of Michael Been’s death and its effect on Black Rebel Motorcycle Club that makes Specter at the Feast so moving. The album has anger and hope, it asks questions that can’t really be easily answered, and recognizes that there might be no answers. You won’t play it to hear how good your stereo sounds. You’ll play it to hear how good and cleansing music can be.