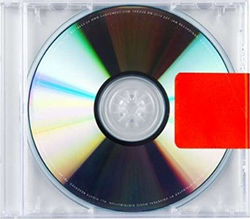 Kanye West sucks. A simple Web search of his choice quotes over the years yields some real gems, and would lead most people to question how on this vast blue planet of ours he became popular. His lyrics offer little illumination. The words on his newest album, Yeezus, appear to have been written over the course of a few hours, by someone capable of rhyming and little else. This isn’t far from the truth, as it turns out; producer Rick Rubin -- responsible for producing Adele’s 21, among other legendary albums -- claims that the last songs on the album were written in two hours. Mind you, these two hours fell between Ye’s (short for Kanye, hence Yeezus) attending a baby shower and flying off to Milan, Italy . . . two days before his album was due to his label. Rumor has it that Rubin was still tinkering with songs just a week before the disc dropped, almost assuredly as a matter of necessity rather than artistic liberty.

Musically, however, Kanye West is befuddlingly good. Yeezus draws on acid house and industrial music -- one could call it dark. But it’s not a brooding, gothic kind of dark. Rather, West’s visceral creations are decidedly spare and raw, at times bordering on the uncomfortably so. No song here has the aroma of a chart topper, with “On Sight” and “Send It Up” prime examples of this.

But “New Slaves” is superb, and one of the few tracks on Yeezus in which West’s lyrical ambition matches that of his music. Segregation, racism, and materialism are the predominant themes, overlaid on a hard-hitting, atmospheric synthesizer. It sounds a little dull until, two thirds of the way in, Kanye and Frank Ocean murmur over a sample, from 1969, of Hungarian rock band Omega. It’s inspired stuff. This kind of abrupt detour appears numerous times in Yeezus. As in “I’m In It” -- most of the way through the richly vulgar tune, and out of nowhere, there’s a gorgeous Justin Vernon interlude. It’s fleeting and not particularly significant -- “I’m In It” quickly returns to the Yeezus status quo -- but each time I hear it, I’m floored.

“Blood on the Leaves” heavily samples Nina Simone’s cover of Billie Holiday’s “Strange Fruit,” a weighty song about a lynching. It’s an odd juxtaposition with West’s generic, Auto-Tuned hip-hop lyrics, and a properly raucous array of brass instruments in the background. But it works -- and well, at that. Likewise with “Bound 2,” a classic Kanye cut, mostly underlaid by the Ponderosa Twins Plus One’s “Bound.” Its rich, soulful vibe makes it the track with, arguably, the broadest appeal.

But the toe-tapping standout, by a wide margin, is “Hold My Liquor.” Crank the volume, for the bass in this, the album’s keystone track, is punishingly deep. It features a repetitive, off-putting alarm sound in the left channel, and its pulsating synthesizers and delicious rhythm are addictive -- the electric guitar sounds as if it’s been pulled from a 1980s rock anthem. Combined with Ye’s sometimes nonsensical, sometimes hilarious lyrics -- “When I park my Range Rover / Slightly scratch your Corolla / Okay, I smashed your Corolla” -- it combines into a deliciously unified whole.

Sonically, there’s a ton of unscrubbed detail on Yeezus. Synthesizers are brash, loud, and clean. Voices are often permitted to shine through without significant accompaniment. The soundscapes are broad and deep -- through good headphones, the album sounds quite cerebral; through loudspeakers, cavernous. Either way, West’s notoriously fastidious mixing is worth deeper exploration.

And that’s the crux of it. In “Black Skinhead,” the man says that he “keep[s] it 300, like the Romans,” presumably (and incorrectly) referencing the 300 Spartans in the Battle of Thermopylae. Yet for all his apparent ignorance and dearth of lyrical prowess, it must be said again: Kanye West is a masterful musician. Yeezus won’t appeal to a mainstream audience, and it’s hardly a modern-day Rite of Spring. But it’s fabulous.