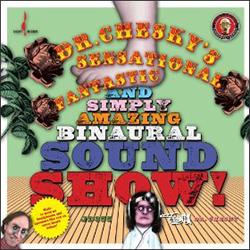 The name Chesky should be familiar to audiophiles. Not only is David Chesky an accomplished musician and Grammy-nominated composer, he is also a record producer, and the cofounder of Chesky Records and the online high-resolution music store HDtracks.com.

In the past year, the Miami native has collaborated with Princeton professor Edgar Y. Choueiri to begin producing binaural recordings. In comparison to the two-channel stereo recordings that are de rigueur in the industry, for which two or more microphones are placed in front of the performer(s), binaural recordings are made by placing a specially calibrated B&K HD 4100 mike in each ear of a dummy head, or Kunstkopf. This allows the size and shape of a hypothetical listener’s head to be factored into the recording process, the intended result being a three-dimensional soundfield that brings actual listeners closer to the recorded event. Whereas binaural recordings up to this point have been exclusively intended to be heard through headphones or earphones, the Binaural+ format used on Binaural Sound Show! uses specially tailored filters to permit the recordings’ use with stereo loudspeakers.

The 26-track disc features 18 tracks of music from a variety of genres, followed by eight tracks of audiophile material, including right/left channel testing, and various instrumental scales to test frequency response. The sound quality of the entire disc is first-rate, with none of the usual postproduction that inhibits the enjoyment of so many popular releases. Voices and instruments are thoroughly unprocessed, and the various New York City recording venues used to record the disc are reproduced in surprising detail. The native recordings are 24-bit/192kHz, downsampled to 16/44.1 for this CD release.

This is not a disc to be listened to from start to finish, but it serves as a terrific showcase for the merits of binaural recordings, and the test tracks are tremendously useful. The liner notes helpfully describe the frequencies being played in each instrument’s scales, while the right- and left-channel tests are, without question, the most realistic recordings I have ever heard through a pair of headphones. Using my Shure SE530 earphones, I literally cringed as David Chesky slowly walked toward me, first from the right, then the left, and began to whisper in my ear. It was a thoroughly unnerving experience -- not because it was so different from a traditional stereophonic recording, but because it sounded so uncannily natural and real. I derived mild pleasure from watching my better half have the same reaction. This effect was not lost through my omnidirectional Mirage loudspeakers, but was somewhat muted. The test tracks took on a curved dimensionality that made me feel more as if I were sitting in the middle of the performance rather than viewing it from afar, as an audience member. It’s not a weird or cheap party trick, but merely different from a traditional stereo recording.

The musical selections are varied in style and substance, but all are of excellent quality. From folk to jazz, and from classical to Middle Eastern fare, there’s something for just about every type of listener. My favorites include "Phrases," by White, Sherman & Haddad, in which male singers beatbox across 180 degrees, from the edge of my left ear, around the front of my head, to the back of my right ear. Mozart’s "Ave Verum Corpus," performed by the Choir of the Church of the Blessed Sacrament, was comprehensively engaging, the choir front and center but resonating around me in a very immersive manner as I listened through my Shure earphones. In "Dancing Flute & Drum," Anne Drummond and David Chesky play the two instruments in a large recording space. The drum thwacks sound from the right but resonate centrally in an expansive manner, while the flutist wanders from left to center of the recording and back again, before wandering off into the distance. If you have a pair of full-range speakers, play this track loudly to fully appreciate what’s on offer in Binaural Sound Show!

While not a traditional musical release, the 75 minutes of content on Chesky’s disc is expectedly excellent, in both sound quality and presentation. Binaural is back, and I’m more than a little curious to hear what future recordings have in store for us.