Poncho Sanchez and His Latin Jazz Band: "Live in Hollywood" 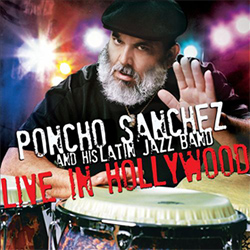 Bandleader and conguero Poncho Sanchez signed with Concord Picante in 1982, after his boss at the time, vibraphonist Cal Tjader, recommended Sanchez to the label’s president. He has remained with Concord for 30 years, and Live in Hollywood is his 26th release for them. Sanchez had several chances to jump ship, but he’s stayed put, and this recording is his gift to Concord, his testament to his loyalty and theirs. Sanchez and his eight-piece band performed the music on this disc at the Hollywood & Highland Summer Concert Series, in July of this year, in front of an enthusiastic crowd.

Part of the appeal of Latin jazz is its packed rhythms and dizzying displays of instrumental technique. Francisco Torres’s arrangements for Sanchez give the players plenty of room to stretch out, but the band plays with subtlety and even a touch of restraint, without sacrificing the fire that is a distinctive characteristic of the genre. Torres and Sanchez also blend musical styles convincingly. "Crosscut Saw," a tune best known in the version by Albert King, features guest George Dez on guitar and vocals, with the horn section playing transcriptions of many of King’s signature guitar lines. Dez fires off a fine solo, but it’s saxophonist Rob Hardt’s smoking evocation of R&B great Junior Walker, set against the band’s Latin percussion, that sells the track.

The band does another genre bend with a medley of Mario Bauzá’s "Mambo Inn" and the jazz standard "On Green Dolphin Street." The segue from one tune to the next is seamless, and Torres’s arrangement gives the horns a warm mid-register to play in, reinforced by his own round-toned trombone playing. The piano vamps for a percussion workout from Angel Rodriguez that doesn’t overstay its welcome, and the band glides easily back into the melody. Sanchez plays "Morning" in tribute to Clare Fischer, an early mentor, and gives an affectionate nod to the great Cuban conguero Mongo Santamaria with a take on "Afro Blue."

Mambo, salsa, blues, and jazz coexist easily on Live in Hollywood. Sanchez’s band has an abundance of great soloists, including Sanchez himself, and the leader is generous in giving everyone a moment in the spotlight. The energy level stays high, but the pace is varied to keep you waiting for the next surprise. But as much as Sanchez mixes things up, he loves Latin jazz traditions, and closes the 55-minute set with the salsa standard "Son Son Charari." It’s exuberant, with changes in mood and structure, and the band plays with both precision and abandon.

The output level of Live in Hollywood is a bit high; turning down the volume slightly brought the recording into better focus, with more detail between the percussionists and horn players. The overall sound was as exciting as the performance itself, but I might have wished for more atmosphere -- a greater feel for the space in which the music was played, and more of a sense that an audience was present. Despite that minor caveat, Live in Hollywood is a good example of a hot band in wailing form.