It’s not exactly news that the COVID-19 pandemic threw things into confusion, and one of its impacts was on the delivery of mail. The US Postal Service’s own internal issues compounded this with further delays and backlogs. Near the end of January 2021, I received a holiday disc that had been released in November 2020 by 2L, a Norwegian audiophile label. Normally, I wouldn’t review a disc that has been available for a year, but Stille grender is a collection that is worthy of your attention at this time of year.

Det Norske Jentekor (“The Norwegian Girls’ Choir”), under the direction of Anne Karin Sundal-Ask, sings 13 carols on Stille grender, with jazz pianist Tord Gustavsen accompanying them on all but two. Gustavsen plucks the piano strings and taps the instrument to create a dark, percussive intro to the opening track, “Carol of the Bells.” The tension is released when the voices enter, their bright and beautiful harmonies playing against Gustavsen’s aggressive playing. Gustavsen evokes the noise and intensity of modern life and the voices of the choir invite us to set those pressures aside. 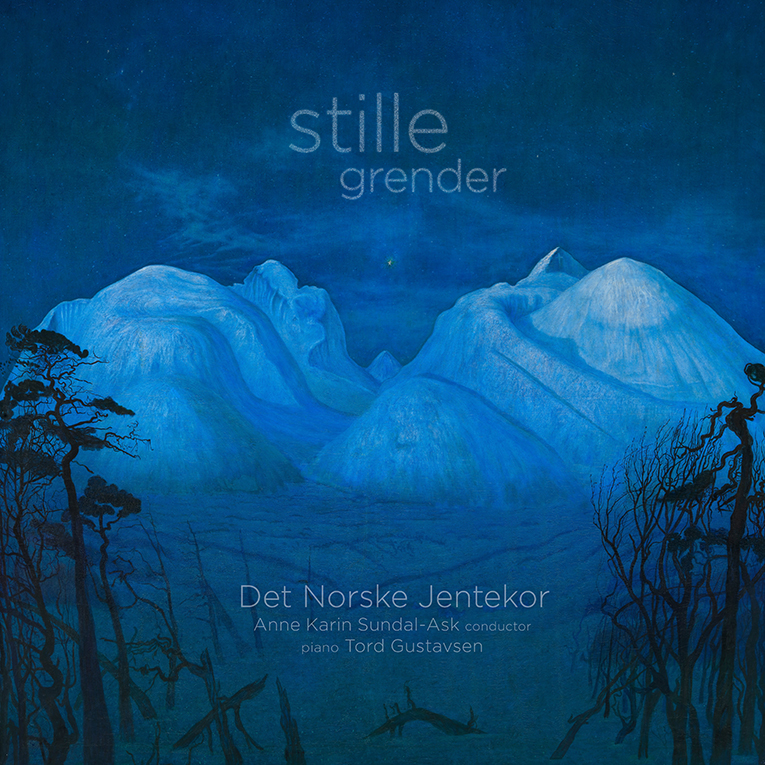 Most of the carols on Stille grender are Norwegian, but “Glade jul (Stille natt)” is a wordless vocal performance of “Silent Night.” Gustavsen’s understated jazz playing on the song contains a hint of American gospel music. He gives “Det lyser i stille grender” (“The Glow of a Peaceful Village”) the feel of a Christmas Eve candlelight service, but on most of these traditional songs he adds a fresh and inventive backing that provides an exciting contrast to the choir’s lovely, marvelously constructed harmonies.

Two tracks feature the choir without Gustavsen. “Deilig er den himmel blå” (“Sky So Full of Purest Blue”) presents sections of the choir singing different lines, melodies crossing and building in intensity and feeling. “Jul i svingen” (“Christmas in Svingen”) brings the youngest members of the ensemble forward to carry the melody and verses as other members of the group sing lines that mimic Christmas bells. The song comes from a popular 2006 Norwegian Christmas television special, and this arrangement evokes the childlike wonders of the season without becoming precious or cloying.

Gustavsen has two solo spots on the Hybrid SACD disc. “The Bells,” his take on “Carol of the Bells,” follows the choir track. His solo interpretation retains the emotional complexity of his accompaniment for the choral arrangement, but balances it with more hopeful, melodic passages. “Ljoset nytt i natti rann” (“The New Light Flowed in the Night”) is a Gustavsen composition that also evokes the complexity and bustle of modern life before moving into a contemplative closing section. 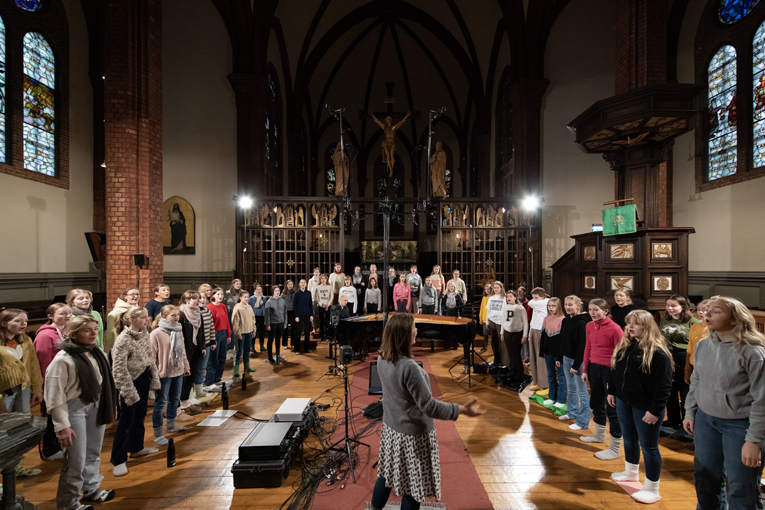 2L is meticulous in its recordings and issues many of its titles in two-disc, multiformat sets. The first disc of Stille grender is a Hybrid SACD that includes two-channel and surround playback capability in its SACD layer, and two-channel playback on its CD layer. The second is a Pure Audio Blu-ray Disc that also presents the music in two-channel and surround sound, as well as offering playback in MQA, FLAC, and MP3. I compared the CD, SACD, and Blu-ray playback in two-channel sound, since I don’t have access to a good multichannel music system.

CD playback on the disc was very good, but when I switched to SACD I heard a more spacious presentation of the music that gave me a clear, focused view of where each section of the choir was standing in Oslo’s Uranienborg Church, where the music was recorded. Gustavsen’s piano was more three-dimensional, and I could hear when he pressed the piano pedals for different effects.

Switching to the Blu-ray Disc, the LPCM 24-bit/192kHz stereo layer gave me the feeling that I had moved further into the midst of the space where the singers and Gustavsen were performing. The physical presence of the piano was more palpable, and I could hear the sound of the voices reverberating within the walls of the 135-year-old church. In two-channel stereo, it was an immersive listening experience that gave me a startling sense of being in the same space as the performers. Unusually, I even wished I had good multichannel playback, in order to experience this music even more fully. The Blu-ray has ten more solo tracks by Gustavsen, all of them worthwhile and moving. 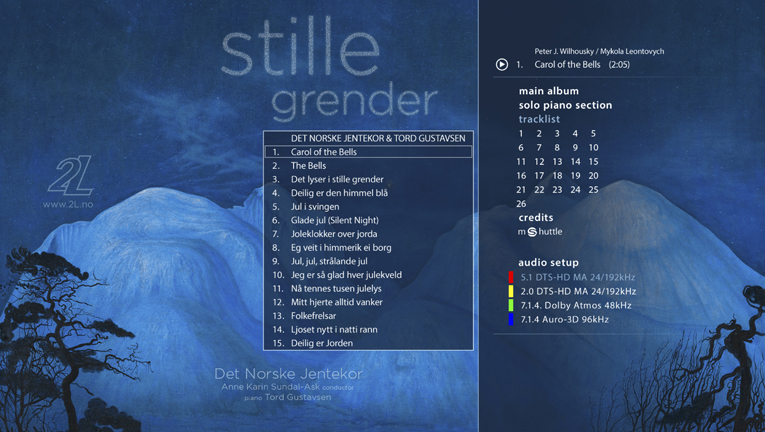 The booklet that accompanies the discs includes a story by Norwegian writer Tania Kjeldset. She also penned the liner notes, and she ends her observations by saying that when we have finished listening to Stille grender, “we rest in a soothing embrace—silently ready for Christmas.” When I received the disc set in January, we were already ten months into the pandemic. Nearly a year later, we are still on edge and the voices of these singers are reminders that this time of year carries with it the hope of peace on Earth.