Drummer Steve Gadd has played on so many records, in so many genres of music, that his discography seems to run on forever. To say he’s been in demand over the years is an understatement. He’s also led his own bands; one of these, Steve Gadd Band, is composed largely of musicians who, like him, were members of James Taylor’s touring group. That lineup’s fourth release, Steve Gadd Band (2018), won a Grammy for Best Contemporary Instrumental Album.

In December 2019, Steve Gadd Band performed live in Japan at Blue Note Tokyo, a satellite of New York City’s Blue Note Jazz Club. The group’s newest release, At Blue Note Tokyo, was recorded at the venue. Walt Fowler, on trumpet and flugelhorn, and Jimmy Johnson, on bass, have both played with Gadd in Taylor’s touring group and on all previous Steve Gadd Band recordings. Kevin Hays joined the group on keyboards for Steve Gadd Band and continues in that role here. Guitarist David Spinozza—himself a long-established and prolific session musician—subbed for Michael Landau, the band’s usual guitarist. 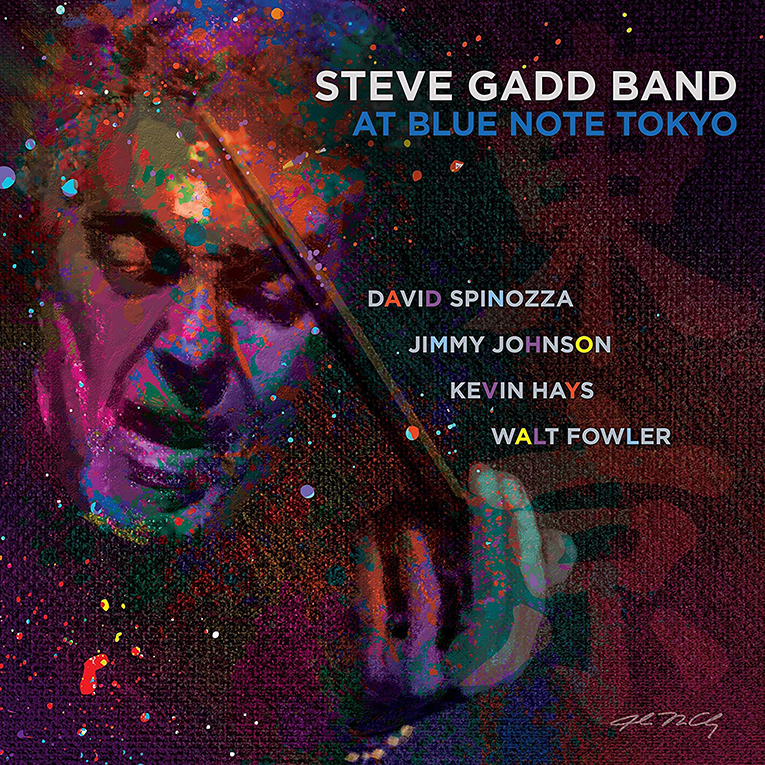 “Doesn’t She Know by Now” is an easy-flowing Spinozza tune that first appeared on his eponymous 1977 LP. Here it’s taken at a slightly slower pace that lets it unfold comfortably, giving Fowler’s flugelhorn solo room to shine. “Hidden Drive,” another Spinozza track, lets the band show its blues chops, and Hays is especially fine on acoustic piano. Hays gets to sing on his own composition, “Walk with Me,” and for a deep bluesy take on Bob Dylan’s “Watching the River Flow.” His singing is relaxed and likable on these tracks, but in both cases it’s the band’s interactions and the quality of the solos that pulled me in.

In these performances, the emphasis is on melody, groove, and group interplay, and Gadd shows why he’s so highly regarded as a session player. He’s the band’s leader, but he never shows off or makes himself the center of attention. He responds to the other players, giving them the right accents and emphases to help the arrangements and solos develop. He gets to feature in Johnson’s Latin-flavored “One Point Five,” building his solo on the song’s themes and bringing it to a rousing close within the context of the tune’s development. 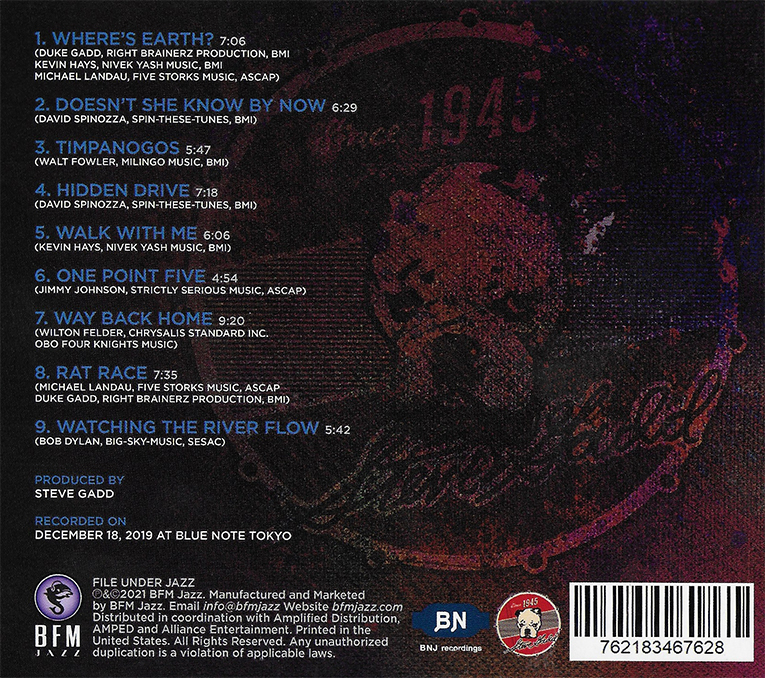 Junto Fukuhara, who handles the stage mixing at Blue Note Tokyo, recorded the show. The vivid sound captures the atmosphere of the club and lets the instrumental tones and textures register well. Johnson’s bass attack comes through powerfully, but all the instruments are placed firmly in the soundstage; overall, the recording is balanced and pristine.

There’s a relaxed ease to At Blue Note Tokyo that avoids swerving into the smooth jazz lane. Spinozza’s playing has a slightly looser rhythmic quality than Michael Landau’s, and gives the band a hint of the Meters’ soulful funk. At Blue Note Tokyo, like Steve Gadd Band’s other live outing, Way Back Home: Live from Rochester, NY (2016), generates plenty of heat. It’ll also get you up and dancing.