Willie Nelson’s 2018 tribute to Frank Sinatra, My Way, showed his affection for the singer’s work, but on the 11 songs Nelson chose to cover he avoided simply retracing the Chairman of the Board’s footsteps. “Summer Wind” had its own relaxed charm, “It Was a Very Good Year” showed a different shade of melancholy from Sinatra’s, and “My Way” was a summing-up that avoided the swagger that marred Sinatra’s own take on the song (it’s one of the few Sinatra numbers I’ve never liked).

Nelson returns to Sinatra’s legacy with That’s Life, and the cover painting is similar to the one on the cover of Sinatra’s 1955 album In the Wee Small Hours, one of several masterpieces Ol’ Blue Eyes recorded for Capitol Records. Nelson’s take on “In the Wee Small Hours of the Morning” begins in a less ornate fashion than Sinatra’s, with Matt Rollings on piano and Dean Parks on guitar setting a relaxed tone. A string arrangement eases in, and Nelson’s expression of romantic heartbreak and late-night loneliness is a near match for the original. 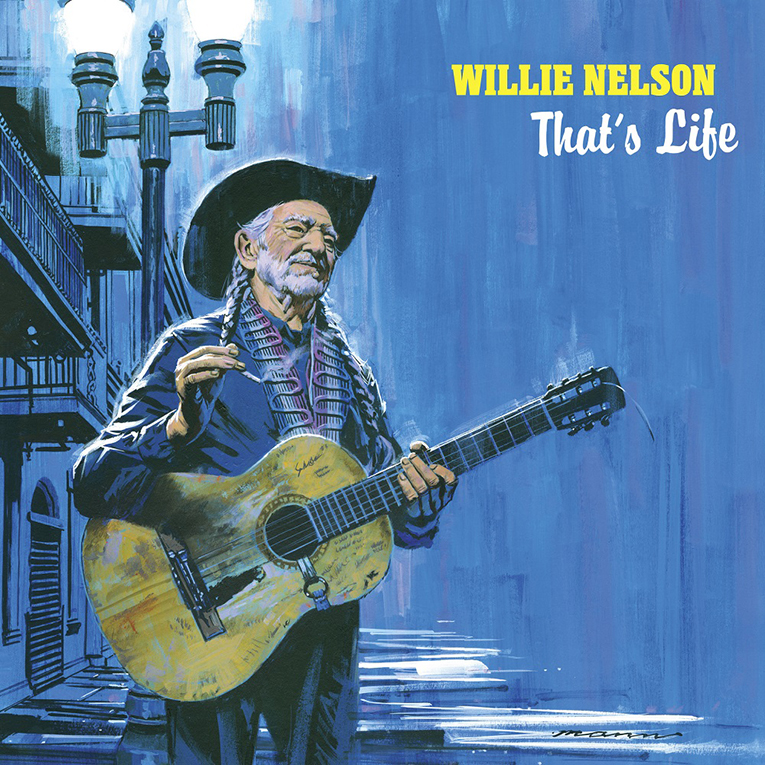 Aside from another ballad, “Cottage for Sale,” That’s Life leans toward the faster-paced songs in the Sinatra catalog. Rollings’s jaunty piano introduces “Nice Work if You Can Get It,” and Paul Franklin’s steel guitar nudges it toward western swing. Chris McDonald’s horn orchestration lights up “You Make Me Feel So Young,” and “I Won’t Dance” matches horns to a silky string chart by Kristin Wilkinson. Diana Krall duets with Nelson on the latter, but Nelson, who made his name as a country singer, takes a more unpredictable route with the timing and phrasing of the lyrics.

“That’s Life” uses a simple blues pattern, with Rollings on the Hammond B-3 augmenting his own tasteful piano playing. Paul Franklin’s steel-guitar solo is brief but effective and Mickey Raphael’s harmonica playing contains hints of both blues and honky-tonk. “Luck Be a Lady” injects a Latin beat into the album, then mixes things up by switching to straight time during the bridge. Rollings’s arrangements help Nelson to bring fresh interpretations to the songs.

The musicianship on That’s Life is first-rate throughout. Jazz bassist David Piltch played on My Way, as well as on Summertime: Willie Nelson Sings Gershwin, and his bass lines provide a firm foundation while keeping things rhythmically alive. Mickey Raphael’s harmonica playing is understated, but never fails to bring the right touch to a song. In addition to piano, Rollings adds vital touches on organ and vibraphone. Drummer Jay Bellerose and guitarist Dean Parks never once call attention to themselves but they are subtly brilliant throughout.

Paul Franklin’s steel-guitar solos are highpoints, but this is Nelson’s album. His playful sense of timing, his phrasing, and his unforced expressions of emotion show how much Sinatra has influenced him, but there are echoes of other singers, especially Billie Holiday, Ella Fitzgerald, and, of course, Merle Haggard. At 87, Nelson’s voice has lost some of its flexibility, but he never strains for a note, and the album is most notable for its relaxed understatement. 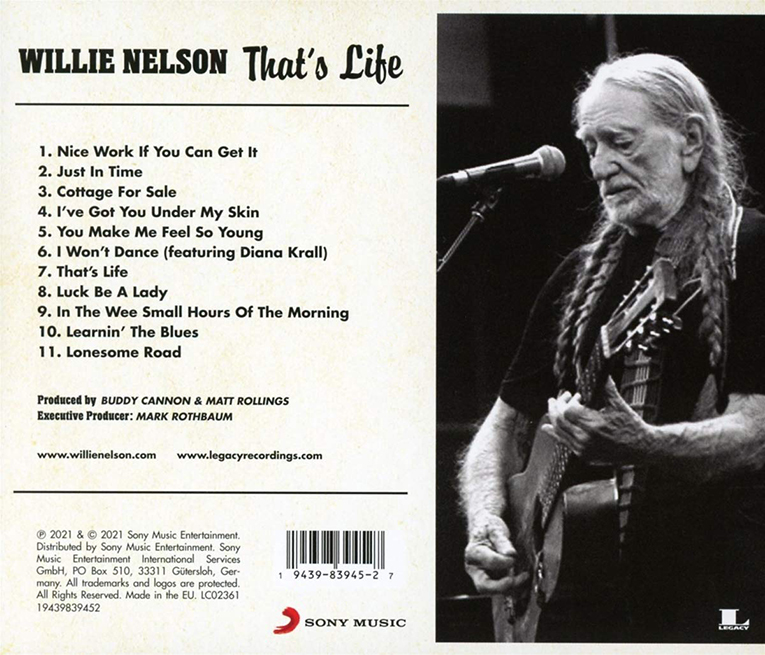 Nelson and his musicians recorded most of That’s Life at Capitol Studios in Hollywood, California, where Sinatra did so much of his best work. The result is wonderfully clean and detailed, with Nelson’s voice well out in front and instrumental details coming through resolutely. I occasionally wondered if things weren’t a little Pro Tools perfect, but Nelson takes care of that by throwing in the occasional curve ball in his interpretations, and each play of the disc revealed more great touches from the musicians backing him.

“That cat’s a blues singer,” Sinatra once said of Nelson. “He can sing my stuff but I don’t know if I can sing his.” As Sinatra’s own version of “That’s Life” demonstrated, he had a good feel for the blues, but there’s no question that for Nelson it’s a defining genre. It courses through nearly every track on That’s Life. Willie Nelson’s command of the American songbook, to which he has made a few contributions himself, first became apparent with Stardust in 1978, and he’s returned to that well on other albums, including Somewhere Over the Rainbow (1981), Without a Song (1983), and the Sinatra tributes. Duke Ellington said of the music he loved that it was “beyond category.” Those words apply to Willie Nelson’s music.