In July, during the fourth month of the pandemic, a video showed up in my Facebook feed. It was a live performance by guitarist Bill Frisell’s current trio, with Thomas Morgan on bass and Rudy Royston on drums. They were outside on the porch of a house in Brooklyn, wearing face masks and playing, appropriately, the great Bacharach and David tune “What the World Needs Now Is Love.” Folks from the neighborhood were sitting on lawn chairs, enjoying the chance, rare these days, to hear live music.

Valentine is the trio’s recording debut, although they have played together live many times over the last two years. Frisell has released two terrific live recordings with Morgan -- Small Town (2017) and Epistrophy (2019) -- but it is clear from the opening track, “Baba Drame,” that Royston gives the two players a boost of rhythmic unity. On the duet’s recordings, Frisell and Morgan show exquisite feel for the use of space to develop musical ideas, but Royston’s accents and rolls on this disc give color and emphasis to the music.

Frisell first recorded “Baba Drame” in 2003 for The Intercontinentals. That version of the song featured Malian percussionist and singer Sidiki Camara, and Royston mirrors the rhythmic complexity of the earlier arrangement on this slower take on the song. Morgan weaves through Frisell’s chord clusters and single-note runs, while Royston’s drum rolls and cymbal clashes propel the music and prod the other two musicians along.

The title track, Frisell’s “Valentine,” owes some of its ideas to Thelonious Monk’s “Well, You Needn’t.” Sometimes Royston skitters around the guitarist’s melodies, while at other times he gives him firm, swinging support, with help from Morgan’s solidly played bass lines. “Levees,” which Frisell wrote for the 2012 documentary The Great Flood, evokes the power and unpredictability of the Mississippi. Royston and Morgan provide a strong background for Frisell’s excursions.

Frisell wrote eight of the tunes on the disc, but all 13 show the many facets of his playing. “Levees” and “Aunt Mary” contain strains of the folk and country music that helped shape his signature playing style. “Winter Always Turns to Spring,” which first appeared as a multi-tracked solo recording on Frisell’s Ghost Town (1999), is a perfect example of his ability to create an almost cinematic musical narrative. Royston’s use of dynamics is subtle on this version, but is vital in creating the sense of the slow forward movement in time suggested by the title. 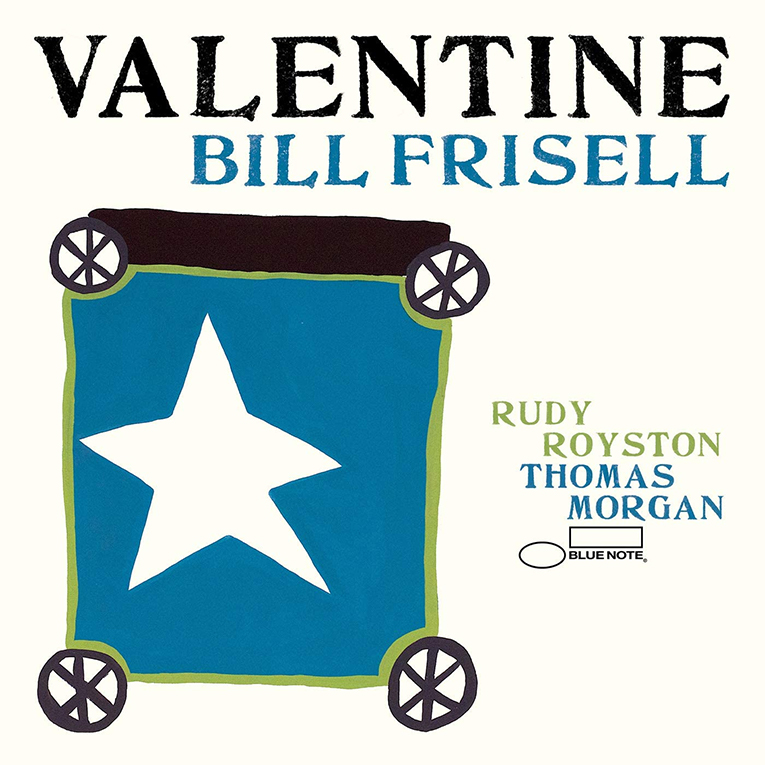 Morgan’s opening for “Wagon Wheels” sounds like the beginning of a folk tune, but Frisell and Royston join to move the song into the more rhythmically elastic realm of jazz. Royston’s cymbal work and cross-sticking center and drive the arrangement, but his accents throughout underscore Frisell’s lines and give them a giddy kick. Billy Strayhorn’s “A Flower Is a Lovesome Thing” is bracingly fresh in this new playing, carrying with it Frisell’s lifetime of listening to and thinking about music while letting his younger accompanists share in and reinforce his interpretation of a jazz perennial.

“What the World Needs Now Is Love” is a gentle reading of the song. Frisell’s use of single-note melodies, harmonics, and intervals lets him expand upon the song while not losing sight of its unique beauty, or the meaning of the lyrics, which I found myself singing as I listened. Valentine closes with “We Shall Overcome,” an adaptation of a spiritual that has long been part of civil rights protests. The trio’s version conveys hope, respect, and dignity.

Lee Townsend’s production brought me close to the musicians, letting me hear the overtones and harmonics of Frisell’s guitar with immediate clarity, but also presenting the clear tones of Royston’s drums and cymbals. Morgan’s bass had full presence but didn’t dominate or overpower. Instruments were balanced and clearly placed.

Valentine is as challenging and fulfilling a listen as Frisell has recorded, and it vividly captures the complexities of this moment in time. “What the World Needs Now Is Love” and “We Shall Overcome” are reminders of our obligation to move forward in peace. “Hour Glass,” the album’s second track, is a song Frisell wrote for a reading of Allen Ginsberg’s “Kaddish” that was staged by producer Hal Willner, who died in April of COVID-19. Ginsberg’s poem describes the grief he felt when his mother died, and “Hour Glass” expresses Frisell’s sadness at losing his friend. Valentine embraces grief, hope, life’s occasional difficulties, and the healing balm of music.