Drummer Andrew Cyrille’s first release as a leader for ECM, The Declaration of Musical Independence, was a powerful, challenging quartet session with guitarist Bill Frisell, keyboardist Richard Teitelbaum, and bassist Ben Street. Frisell returns for Cyrille’s newest album, Lebroba, but this time in a trio with trumpeter Wadada Leo Smith. The result is an album of grace and beauty that uses space and time to let the music unfold and expand.

Frisell recorded his composition “Worried Woman” in 2010 on a unique trio album, Beautiful Dreamers, with violist Eyvind Kang and drummer Rudy Royston. That version was played to a martial beat, but here Cyrille weaves a tapestry of rhythm and sound throughout Frisell’s chord swells and arpeggios, adding emphasis and color to Smith’s firmly stated melodies. Frisell uses loops and repetition to create a rhythmic backdrop as he and Smith explore the melodic theme.

Smith’s “Turiya: Alice Coltrane Meditations and Dreams: Love” is a 17-minute piece in four movements. The trio plays a short statement at the opening, Smith playing a blues-flavored melody as Cyrille fills in behind him with cymbal taps and Frisell fills the space with single notes, harmonics, and muted chords. The piece shifts tempo several times and has a free, improvisational feel, but after a few listens it comes together logically, Cyrille using space and emphasis rather than strict rhythm to create counterpoint, tension, and release.

The title of the next track is a contraction of the names of the towns where the three players grew up: Leland, Brooklyn, and Baltimore. “Lebroba” swings, but even as Cyrille establishes the rhythm, he lets it stretch and snap. “TGD,” credited to the trio, is a dark, brooding, free improvisation filled with Frisell’s distorted feedback guitar and Smith’s stabbing trumpet, Cyrille’s skittering drums pulling things together with edgy effectiveness. Frisell’s use of effects gives the piece a thoroughly modern feel, but Cyrille’s percussion sounds both ancient and bracingly up to the minute. 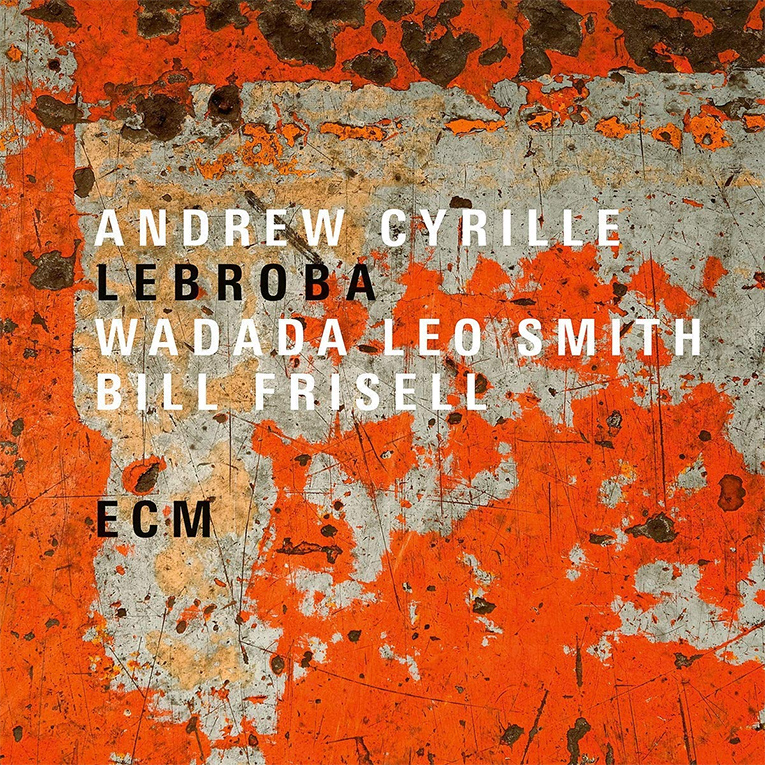 Cyrille uses mallets and brushes in his “Pretty Beauty,” which ends the disc on a warm, lovely note. As he does in the other tracks, the drummer provides texture and atmosphere, giving Frisell’s beautifully sustained chords a suitable backdrop. Smith plays the delicate melody with firmness but great sensitivity.

Kevin Whitehead’s excellent liner notes include a quote from Cyrille that describes his recent style as one “where the meter is implied but not inferred.” The five tracks on Lebroba are rhythmically centered, but Cyrille is always commenting and expanding on what the other two are doing. He thinks melodically as well as rhythmically, and the results are often exhilarating and free. The players are spontaneous, and so attuned to each other that the music is seamless, with an accessible quality easy to appreciate on first listen, and that comes together even more logically with repeated hearings.

The album was produced by Sun Chung, and the sound evinces ECM’s usual attention to space and instrumental detail and integrity on both CD and LP -- but the music really blooms on vinyl. Cyrille’s low-toned drums, the kick drum and toms, hit with more force and staying power, and Frisell’s chord swells have a luxurious level of depth and sustain. The bell of Smith’s trumpet is easier to visualize and its sound is more textured, and the interaction among the three musicians is more palpable.

The pressing, by Pallas in Germany, is first-rate, with silent backgrounds and vivid sound. The cover photo looks terrific, with colors more vivid than on the CD booklet. Whitehead’s liner notes are printed on a large insert.

Lebroba is a testament to how three musicians can learn to anticipate and build on each other’s ideas in ways that are unpredictable and exciting. At age 79, Andrew Cyrille is teaching us new things about music, and this album reveals new riches every time I hear it.