Don Was, president of Blue Note Records, has been helping keep the label current by signing young musicians such as the pianist Robert Glasper. He’s also been keeping its history alive by bringing on musicians who are well established. In some cases, they have prior history with the label. Charles Lloyd, who released two discs on Blue Note in the last two years, had a brief association with the label in the 1980s. Dr. Lonnie Smith recorded four LPs for Blue Note in the late ’60s and early ’70s, and in 1995 the label released a 1970 Smith recording from its archives, Live at Club Mozambique.

Smith’s greasy Hammond B3 has graced recordings by George Benson and others, and he’s led quite a few sessions himself. Evolution, his 24th release, features Glasper on one tune and Joe Lovano, a longtime Blue Note artist, on two others. Smith wrote five of the seven tracks, and covers Thelonious Monk’s “Straight, No Chaser,” and the Rodgers and Hammerstein chestnut “My Favorite Things.”

Smith’s “Play It Back” first appeared on Live at Club Mozambique. The tune is representative of the kind of funky jazz Smith was playing on his own records and with Lou Donaldson 40 years ago. This time around, with two drummers on hand, Joe Dyson and Jonathan Blake, the beat is even more emphatic. Glasper’s chords harmonically expand the music, and his lengthy solo is complex while remaining firmly in the groove. Trumpeter Keyon Harrold, tenor-sax player John Ellis, and Smith all shine in generously long solos, and the 14-minute track’s energy never flags. 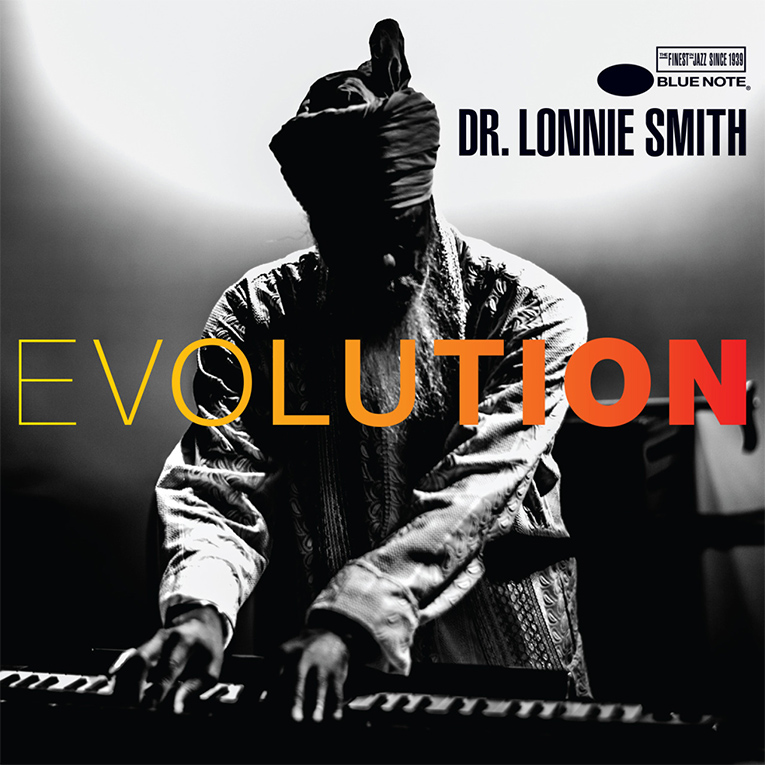 Joe Lovano plays a mezzo-soprano sax in G in “Afrodesia,” his recording debut when he played the tune with Smith on a 1975 Groove Merchant LP. The original recording had just a hint of disco; this one is slower and edgier. The two drummers keep the groove firmly intact, and the solos from all, including trumpeter Maurice Brown, are well developed and moving. Someone should put words to the slow jam “For Heaven’s Sake,” another sextet piece, which Smith wrote years ago but records for the first time here. Terrific solos all around, especially from Smith, but Jonathan Kreisberg also does a nice turn on guitar.

“Talk About This” is slow-burn funk, with a muscular, fluid solo by Maurice Brown and an expansive, flashy feature from Smith in a fine pyrotechnic display that is strongly based in melody. Smith stretches out again in “African Suite,” but gives Ellis ample space to develop a strong statement on flute. In this track Smith uses other electronic keyboards to create interesting sound effects, and Dyson and Blake work together beautifully to give it an effectively polyrhythmic backdrop.

In two tracks, Smith is in a more traditional organ-trio setting, with guitarist Kreisberg and drummer Blake. “Straight, No Chaser” is a feature for Kreisberg, who often gigs with Smith, and Smith fires off a powerful solo. Smith uses electronic keyboards for the stately opening of “My Favorite Things,” which leads into a swinging version of the tune that makes it sound bright and new. Blake is outstanding in both tracks; his ride cymbal sizzles, and his finely tuned sense of dynamics helps propel Smith and Kreisberg.

The instruments could have used more space between them, and in some tracks, such as “Play It Back,” the bottom end is a bit murky -- but I found the sound of Evolution very listenable overall, and less compressed than, say, some Blue Note reissues. As for the music, I recommend it without reservation. At 73, Lonnie Smith is as inventive and exciting as any of the younger musicians he plays with here. It’s amazing how fresh, even hip, this music is.