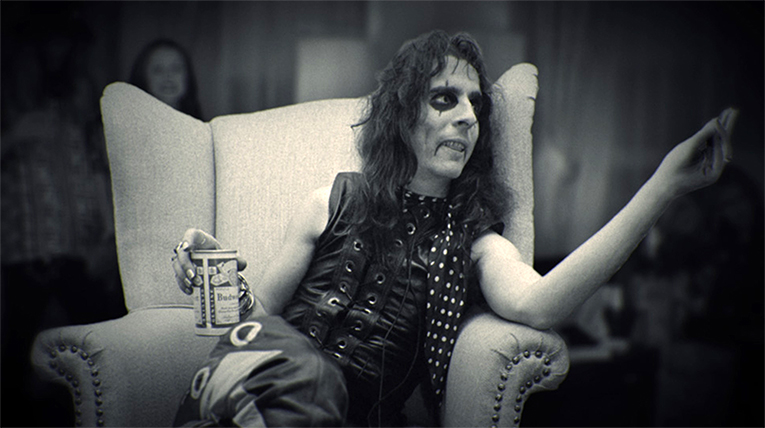 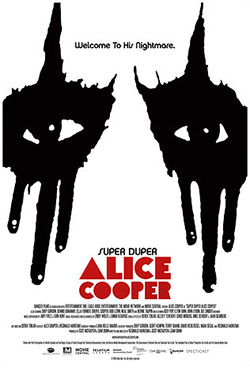 It’s easy to forget just how shocking Alice Cooper was to parents and church leaders 40 years ago, but even now, the concert footage in Super Duper Alice Cooper is a reminder of how outrageously offensive the band was to polite society. They brought rock theatrics to a new level of sophistication and influenced other performers, especially Marilyn Manson. The glam rock of the 1970s that brought Mott the Hoople and David Bowie to prominence is hard to imagine without Cooper’s androgynous attire and makeup.

The Alice Cooper story begins in Detroit in 1948, with the birth of Vincent Damon Furnier. “I lived a really all-American childhood,” Furnier tells us over a series of photos from his childhood. “My dad was a pastor, so I was in church on Wednesday night, Friday night, all day Sunday, and I didn’t lie, steal, or swear. I was the perfect ’50s kid.” Because of young Vincent’s poor health, Furnier’s family moved to Phoenix, where, in a high school art class, he met Dennis Dunaway. The two shared a passion for Dada and surrealism and, soon, the Beatles. They decided to put together an impromptu band for a talent show and enrolled guitarist Glen Buxton, at that point the only one of the three who knew how to play an instrument.

The band, joined by guitarist Michael Bruce and drummer Neal Smith, and with Dunaway on bass, worked hard, got tighter, became a local sensation as the Spiders, and in 1967 moved to Los Angeles to take a shot at stardom. Directors Sam Dunn, Reginald Harkema, and Scot McFadyen cram a lot of information into the film’s first 15 minutes, but good editing and a selection of stock footage and personal photos from the band well capture the times and places.

Things moved fast in L.A. for the Spiders, who changed their name to the Nazz (this was not Todd Rundgren’s group of the same name, founded in Philadelphia in 1967). They met the GTOs (Girls Together Outrageously), a group of singers who were living in the basement of Frank Zappa’s cabin in Laurel Canyon. The band consulted a Ouija board for a new name, and Alice Cooper became both that name and Furnier’s alter ego. They took on and adapted the GTOs’ unique appearance by wearing eye makeup and glittering attire they picked up at thrift shops. Zappa produced their first two LPs, Pretties for You and Easy Action, for his Straight Records label. They utterly flopped, and their shows alienated as many people as they attracted.

Alice Cooper left L.A. in debt and, through a chance booking by their manager, Shep Gordon, ended up in Detroit. They played with the MC5 and the Stooges and toughened up. In L.A. they had been, at best, an interesting psychedelic band. In Detroit they kept the stage antics that had made them infamous in L.A., but added some Motor City rock’n’roll grit to their game. The film’s directors use well-chosen footage to contrast the brightness of the West Coast with Detroit’s industrial grime, and the brief filmed appearances of the MC5 and the Stooges are testaments to how powerful those bands were onstage.

Gordon approached producer Bob Ezrin (Pink Floyd, Peter Gabriel, Lou Reed, Kiss) to oversee Alice Cooper’s third album. Ezrin balked until he saw the band onstage, then produced Love It to Death -- released in 1971, it was their breakthrough album. As the band’s popularity grew, Alice Cooper himself became the center of attention, and the other musicians seemed to take a back seat. It didn’t help that, from 1971 to 1974, they made and released five albums. After Muscle of Love (1974), the group disbanded and Cooper began a solo career; it did well, but he descended into alcohol abuse. 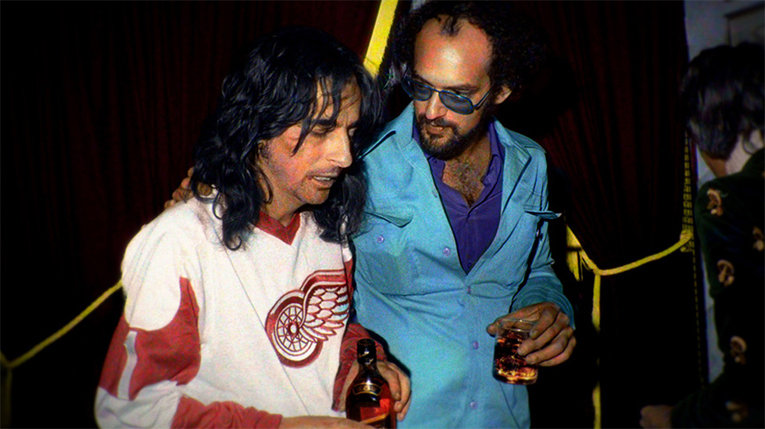 Cooper rehabbed and began working with Elton John’s lyricist, Bernie Taupin. Although success continued, Cooper starting doing cocaine, which nearly killed him. He returned to Phoenix, where his parents nursed him back to health. It was now the ’80s, and Cooper could plug back into the rock world, then dominated by the glam-metal bands he had influenced. He’s remained clean since 1986, and still records and performs.

Super Duper Alice Cooper is most exciting when it recounts the years leading up to the band’s stardom. The film captures the excitement of the ’60s, when rock was establishing itself as a cultural powerhouse, and there are occasional reminders of how much things have changed. Record companies no longer give bands three albums to find their way, and with the demise of AM radio, it’s no longer possible for a station to help push a single into the Top 40, as CKLW in Canada could do for “I’m Eighteen” because its signal reached as far as Chicago, Detroit, and St. Louis.

As an authorized film biography, Super Duper Alice Cooper omits some things. There’s no mention, for instance, of what happened to Michael Bruce or the late Glen Buxton (1947-1997) after the band broke up. On the whole, the film is a good retelling of a rock story, with Cooper and Dunaway providing most of the narrative, but the last 20 minutes or so could have been more tightly edited to keep things moving along.

Bonus material, including recent interviews with Cooper and Dunaway and deleted scenes, fill out the story and, for once, are worthwhile inclusions. Older footage is somewhat grainy, which gives the film some period authenticity, and the sound, especially for the concert footage, is good overall. Cooper fans will want to see it, but rock fans interested in reliving the late 1960s and early ’70s will especially enjoy the first hour.