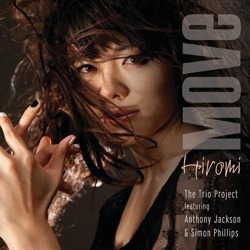 Move is Hiromi’s second disc with bassist Anthony Jackson and drummer Simon Phillips, aka the Trio Project. Even with Hiromi’s acoustic piano dominating, Voice (2011), her first CD with this group, had more pronounced rock elements than her other jazz-trio recordings. Move continues that trend, and manages to balance even more deftly the muscle of rock music with the complexity of jazz improvisation.

Much of the heavy lifting comes from Phillips, known chiefly for his work with the Who and other rock bands. His jazz pedigree can be traced to his first paying job as a drummer, with his father’s Dixieland group, but it’s the hard slam of his rock drumming that Hiromi taps into. Jackson is best known for his work in fusion, but he’s also played on sessions for the O’Jays and Steely Dan. The result is a band with a command of both jazz and pop. The music, like a lot of fusion, has a lot going on, but the acoustic piano keeps things lighter, and the players support each other rather than getting in each other’s way.

The title track highlights the group’s strengths. Hiromi opens with a simple, slightly percussive chord that Jackson and Phillips help drive forward as they enter. As the arrangement becomes more complex and rhythmically driving, Hiromi expands on the chords and introduces a baroque-like melody. It’s soon apparent that Hiromi chose Phillips for his combination of force and subtlety -- he swings, but his backbeat is pure rock. Jackson weaves around Hiromi, giving counterpoint to her melodies and helping firm up the rhythm, especially during a long feature for Phillips.

Hiromi’s light touch in “Brand New Day” shows a Bill Evans influence, and the other players adjust their approaches accordingly. Phillips plays with restraint and taste, his cymbal splashes adding color to Hiromi’s beautiful melodies. Her long, precisely played lines and her feel for dynamics create a sense of drama that make this track a high point of Move. “Rainmaker” opens with a long, impressionistic portion that leads into a section of more aggressive improvisation. As the tune develops, it evokes a summer rain building to a thunderstorm. With Move, Hiromi’s skill at telling a story through music matches her great command of the keyboard.

The three-part “Suite Escapism” is the most ambitious piece on Move and the album’s centerpiece. The first section, “Reality,” creates the feeling of a hectic day and features some of Hiromi’s finest improvisation, with Jackson’s long, fluid lines helping her out. “Fantasy” is contemplative, Phillips again adding the right accents to underscore Hiromi’s melodic concept. “In Between,” as the title implies, mingles the impressions created by the other tunes and resolves them. The suite shows how well these three musicians have learned to anticipate each other’s moves, and the result is a subtler disc than Voice.

Hiromi co-produced Move with Michael Bishop, who recorded, mixed, and mastered it. The instruments are clearly rendered, and Bishop has well captured the excitement of the performances. Move is an important step in the Trio Project’s development, injecting more dynamics and variety into their sound. Let’s see what they do next.