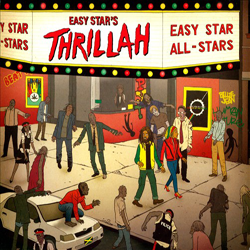 For nearly a decade, the Easy Star All-Stars have been carving a creative niche for themselves, revisioning classic albums by Pink Floyd, Radiohead, and the Beatles into dubbed-out tributes redone with reggae flair. Taking on the daunting task of paying proper respect to some of the greatest albums of all time, the group’s past work includes Dub Side of the Moon (2003), Radiodread (2006), and Easy Star’s Lonely Hearts Dub Band (2009). With their latest effort, Easy Star’s Thrillah, the group tackles the best-selling album of all time: Michael Jackson’s masterpiece, Thriller.

Such an undertaking required the input of some of reggae’s own heavy hitters, including Michael Rose (Black Uhuru), Steel Pulse, Luciano, Mojo Morgan (Morgan Heritage), Yossi Fine (David Bowie, Lou Reed, Stanley Jordan), Joe Tomino (Dub Trio/Matisyahu), and Andy Farag (Umphrey’s McGee). Michael Goldwasser, who produced the album, approached the challenge as an opportunity to pay his highest respects to the King of Pop, infusing each track with careful arranging and artistry. The track list follows that of its predecessor, but the mellow stylizations and horn- and bass-laden structure of reggae add an altogether new feel to these familiar tunes.

"Billie Jean" incorporates reggae’s ever-present air horn as the song opens, until fat sax, syncopated synth, and Luciano’s gravelly voice take the reins, telling the timeless tale of the girl who "claims that I am the one, but the kid is not my son." "Beat It" gets the Nyabinghi rhythm treatment with densely layered bass and drums, which work exceptionally well with the song’s original structure; this track ends up being the most effortless and funky on the disc. For Jackson’s beast of a hit, "Thriller," extra attention is paid to spooky sound-effects such as creaking doors and eerie howling (though no samples from the original Thriller are used anywhere on this album), and singer Spragga Benz gives his eeriest Vincent Price impersonation. But the scariest thing about all this is that this November Thriller celebrates its 30th anniversary. Yikes! Extended instrumental dub versions of "Beat It" and "Thrillah," respectively titled "Dub It" and "Close to Midnight," close out the disc. If you’ve never before imagined that zombified, dreadlocked Rastas could stagger through the streets circa 1982, now is your chance.

Listening to the Easy Star All-Stars’ tribute to Thriller 30 years after that album’s original release is notable for two reasons: 1) today’s reggae artists have given their all in utmost respect to the great gloved one, resulting in an altogether worthy listen; and 2) Michael Jackson’s music and spirit are timelessly relevant but still untouchable, despite anyone’s attempts at emulative duplication.