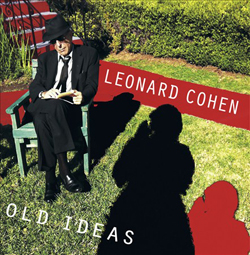 Leonard Cohen is a poet, novelist, painter, and singer-songwriter, and a figure of such sartorial grace that he makes even Bryan Ferry look a bit shabby. He’s a Companion of the Order of Canada (one of several honors he’s received there), and in 2008 was inducted into the Rock and Roll Hall of Fame. His standing as a poet in music puts him in the same category as Bob Dylan and Paul Simon, both of whom are better known but no more widely respected. Cohen, born in Montreal in 1934, has seven years on both of those singer-songwriters, and, like them, is writing about mortality, romance, spirituality, and the mysteries of aging.

Old Ideas is only Cohen’s 12th studio recording in 44 years, and it may be, in "Going Home," the voice of God calling him "a lazy bastard / Living in a suit / But he does say what I tell him," or it might be Cohen’s alter ego. As he approaches the end of his life, he tells us that he’s going someplace better "without the costume that I wore." On Old Ideas, Cohen often admits his faults with a shrug and a resigned chuckle; he seems at peace, even when singing of harsh truths. In "Darkness," he confides that "The present’s not that pleasant / Just a lot of things to do," yet his tone as he sings those words seems both amused and expectant -- he’ll take whatever comes his way.

Cohen’s voice has gotten smokier with age; at times he half recites his lyrics in a near whisper. But when he gets hold of a melody, as in "Show Me the Place," his singing is fragile and beautiful. In "Amen" he captures something of Tom Waits’s tobacco rasp, and in "Darkness" he has the aged wisdom of an old blues singer. He sings "Crazy to Love You" in a way that would do Willie Nelson proud, and Nelson would also be proud to claim one of the disc’s best lines: "Crazy has places to hide in / Deeper than saying goodbye."

Most of the songs on Old Ideas are sparsely arranged; three female harmony singers are the only apparent extravagance. In fact, the music is rich in detail that reveals its layers over time. Cohen used a number of different producers for the recording, and several studios, but the mastering, by Doug Sax and Robert Hadley, has given Old Ideas a consistent sound and feel. No single musician calls attention to him- or herself, but every sound, from the organ washes in "Darkness" to the soft acoustic-guitar notes throughout, is exquisitely right. The uncluttered recording lets rumbling bass guitars ring out clearly, backing voices unfurl their full richness, and acoustic guitars cradle Cohen’s voice.

Cohen has always dealt with spiritual issues in his songs, and in the 1990s he spent five years in a Zen Buddhist monastery. Old Ideas shows a comfort with religion that people of any faith, or even none, should find moving, probing, and profound. The entire disc looks at matters of life, death, and love with ease and humor; in addressing those issues, Cohen’s voice is moving, deeply reassuring, and wise.