Pink Floyd: "Wish You Were Here" 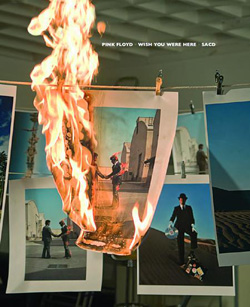 Two years after their phenomenally successful 1973 LP, Dark Side of the Moon,Pink Floyd followed up with another very popular album, Wish You Were Here.That record’s chief themes are the exploitive nature of the music business, the effect of fame on a band’s camaraderie, and the loss of a friend -- specifically, the loss of the band’s leader and guitarist, Syd Barrett, to mental illness and drug abuse.

This multichannel SACD/CD, which features a high-resolution 5.1-channel mix by James Guthrie, is distributed in the US by Analogue Productions, who continue to be committed to SACDs and to vinyl. Pink Floyd’s atmospheric recordings, especially from Dark Side on, are well suited to the surround format, and the group’s fans have clamored for a 5.1 mix of Wish You Were Here on SACD for some time. The disc also includes two-channel mixes in high and CD resolutions.

Pink Floyd’s sound experiments make recordings like Wish You Were Here a worthwhile experience in surround. The swirling keyboards in the opening of "Shine On You Crazy Diamond (Parts 1-5)," with tinkling melodic lines darting in, envelop the listener. Dick Parry’s solo in Part 5 is so clearly rendered that you can "see" the bell of his sax, and the transition into the throbbing elevator ride that leads into "Welcome to the Machine" is more engaging and realistic than on the original LP and early CD pressings -- it pulls you into the center of the experience.

Drummer Nick Mason’s entry in Part 2, after guitarist David Gilmour plays a four-note theme, is truly dynamic in the surround mix. Cymbals shimmer and sustain, and each of Mason’s drums has a majestic openness. Throughout the disc, the notes of Gilmour’s electric-guitar solos ring out clearly, and you can hear the vibrato on each string as he sustains a note. Roger Waters’ bass playing has much more definition than in the first-generation CD, and Rick Wright’s keyboards have more room to breathe and expand.

I compared this disc’s SACD and CD stereo mixes to the first CD release and an early LP pressing. Instruments sound more real in both of the new mixes than on the original CD: Gilmour’s acoustic guitars resonate more openly, and the tones of individual drums are rendered more accurately. The new CD master is a vast improvement over the original, with more clarity, depth, and focus. On the original, Waters’ bass notes tend to smear into each other, but the attack and decay here is more convincing and pleasing to the ear. I still prefer the original LP overall, but the CD tracks on this new hybrid disc are cleaner, and a step closer to the warmth and flow of the analog original. 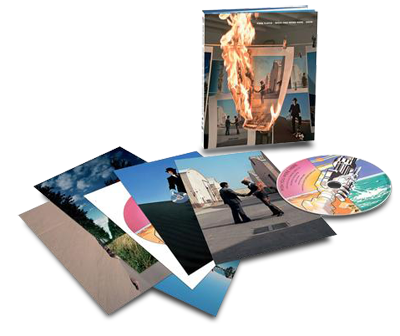 But it’s the new, hi-rez two-channel mix that will be my reference version from now on. It’s more transparent than even the new CD-rez version, and gives a better view of how the instruments were played. You can hear Waters plucking each note more cleanly, and the transients of Mason’s cymbals sound more as they would live. The synthesizers, which in some ways date this recording, sound much more textured and musical here than in any other version. I enjoyed the surround mix as a novelty, and Pink Floyd fans will revel in it, but I found the two-channel experience more involving. It’s that version that I will return to most often.

This multichannel SACD/CD edition of Wish You Were Here is housed in a nicely designed hardcover booklet, with postcard reproductions of the original cover art and photos from the sessions. Pink Floyd fans who own SACD players will be pleased with this release.