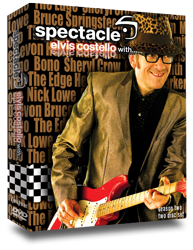 A talk show with Elvis Costello interviewing other musicians could have been unbearably precious, but Costello is such a formidable songwriter, and so obviously bright and quick, that he keeps his equilibrium even with three of rock’s biggest stars: Bruce Springsteen, and U2’s Bono and The Edge. The highlight of the second season of Spectacle: Elvis Costello with . . . is doubtless the two shows with Springsteen. In the first, Costello reaches back to the songwriter’s first two records, prompting the Boss to remember his early days, when he and his band hustled for work in bars along the Jersey shore. Nils Lofgren and Roy Bittan join Springsteen onstage for "Wild Billy’s Circus Story," a song from his second album, The Wild, the Innocent & the E Street Shuffle.

Costello observes that the E Street Band was closer to a soul than a rock’n’roll band during the group’s early tours in the mid-1970s. Springsteen agrees, then tells Costello how much he learned in small clubs by watching Sam & Dave and other soul singers. He and Costello play a rave-up version of Sam & Dave’s "I Can’t Stand Up for Falling Down," which Costello covered on his own fourth LP, Get Happy!! (1980). When Springsteen and Costello talk about the music that inspired them, it’s clear that they still believe that the best music can give people a great deal of hope.

Costello asks the questions of a fellow composer and musician, but he also knows how to get his guests to open up -- as when Springsteen talks about the music his kids listen to. I’m as tired of Bono as anyone is, but Costello is able to get some unique information from him and The Edge about how they write and record their music. Three of the other shows in the set are devoted to several songwriters each; my favorite of these includes Richard Thompson, Nick Lowe, Allen Toussaint, and Levon Helm. Costello brings each man out in turn, asks a few pointed questions, then lets him perform one of his songs (except Helm, who was experiencing voice strain). He then brings all four together as a group, augmented by him and his band, the Imposters.

At least half of each show in the second season is devoted to performances, and the music is uniformly excellent. Bono and The Edge do their songs in stripped-down acoustic versions or with the Imposters, and the new arrangements and performances are refreshing. Nils Lofgren joins Springsteen, Costello, and the Imposters for a medley of "Radio Silence," "Radio Nowhere," and "Radio, Radio" -- and, later, for a blistering version of "Seeds." I’d be surprised if Springsteen didn’t leave the taping wanting to record with Costello’s band. Costello himself is the subject of one of the shows, interviewed by Mary-Louise Parker; it’s a pleasure to hear him talk about his songs, and to watch him and his band work.

Season 2 of Spectacle: Elvis Costello with . . . was beautifully shot in the Apollo Theater and in Ontario’s Masonic Temple. The sound is at times a bit bright, and I recommend the more involving Dolby Digital 5.1 mix over the Dolby Stereo. Outstanding performances and insightful interviews add up to one of the very best music shows ever produced for television.