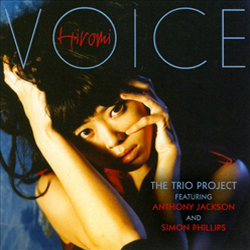 A few years back, when I reviewed Hiromi’s debut disc, Another Mind, I was impressed by her technique but found her execution and ideas to be tiring over an entire disc. My opinion was decidedly in the minority -- the pianist garnered positive reviews for that album and the three that followed. While I disliked Hiromi’s emphasis on ’70s-era jazz fusion on Another Mind,here she uses fusion’s techniques -- speed, dexterity and, to some extent, volume -- in new and interesting ways.

Hiromi uses acoustic piano as the center of the trio arrangements on Voice,although she adds electronic keyboards to some tracks. Her accompanists are Anthony Jackson on contrabass guitar and Simon Phillips on drums. Phillips is perhaps best known as a rock drummer with the Who and Toto, among others. He brings the power of rock to his playing on Voice,along with a double bass drum kit, but he has a good feel for jazz. Jackson is also known as much for his work in pop music as in jazz, and his impressive chops are a match for the leader’s.

The Chopin-like opening of the title tune leads into a lively demonstration of Hiromi’s gifts that shows more classical influence than jazz. When Jackson and Phillips join her, the piece falls into a progressive rock groove, with Phillips flailing away. An improvisational passage leans more toward jazz, with Hiromi playing lyrically at many points and dissonantly in others. Phillips gets a feature, accompanied by the other two musicians, before the piece returns to its opening theme. While my description might suggest that the tune is disjointed, it flows together easily and lets the three talented players show off.

"Flashback" opens with a glorious rain of notes that segue into another rock excursion, but the trio quickly moves into jazz, with Hiromi evoking Bill Evans in one section, Dave Brubeck in another, and Erroll Garner in one particularly bracing and surprising moment in the song. Again, the ideas segue into each other easily and Hiromi’s skill and inventiveness will win you over, whatever opinion you might have of jazz. "Now or Never" is a fine blues excursion, and "Temptation" is a beautifully affecting ballad that Hiromi carries into a faster-paced rhythmic and melodic examination of the main theme. It’s probably the strongest track on the disc, and it shows the powerful influence of Ahmad Jamal, one of her mentors.

Michael Bishop recorded and mastered Voice, and the sound is well balanced. Hiromi’s piano is clear and natural and Bishop keeps Phillips’s drums from dominating and overwhelming the performances. I might have brought Jackson up in the mix just a notch, but I found the mix overall to be enjoyable and accessible, and it sounds like Bishop used minimal, well-placed microphones. Voice is an impressive demonstration of Hiromi’s technique and, along with her solo disc, Place to Be, it’s the purest expression of her gifts.

Hiromi Solo: Live at the Blue Note New York (Telarc TEL-32866-09)is a live DVD of many of the songs that appeared on Place to Be. It’s a pleasure to watch the pianist up close, as she plays with beauty and great technical facility. The LPCM sound is good and the filming is unfussy. In a bonus interview, in Japanese with subtitles, Hiromi talks about her art and about some of her favorite cities she’s visited on tour.