Canned Heat began when two blues lovers and avid record collectors, Bob Hite and Alan Wilson, decided to start a band. Wilson, who sang and played guitar and harmonica, was an avid scholar of the blues who had appeared on a 1965 recording with Son House shortly before meeting Hite. Canned Heat played at the two key late-1960s festivals, Monterey and Woodstock, and had two big hits, “Going Up the Country,” and “On the Road Again,” both reworked from earlier blues tunes. 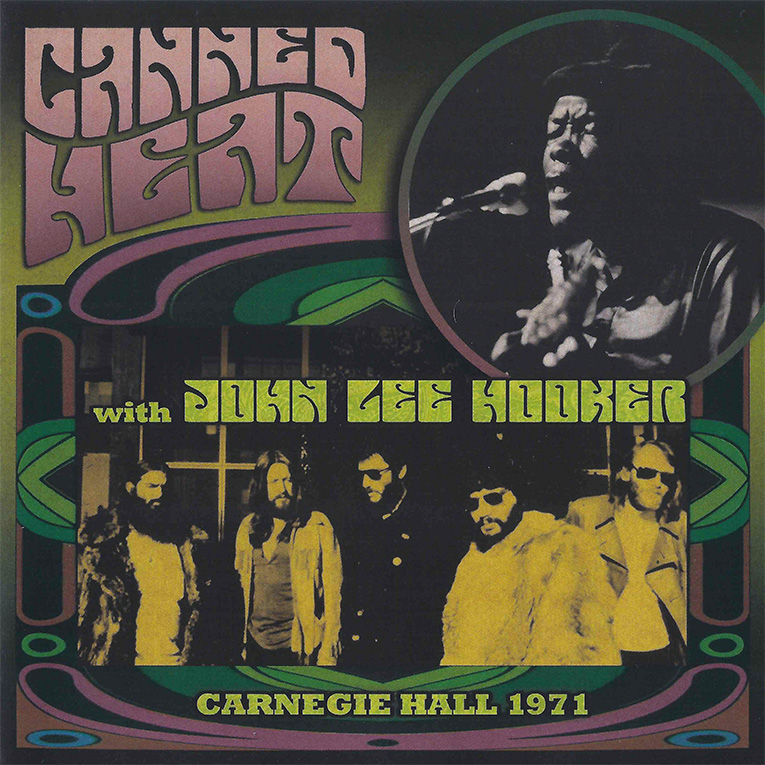 The band had its finest moment on record with Hooker ’n Heat, its collaboration with John Lee Hooker. The two-LP set was released in January 1971, five months after Wilson’s death from a barbiturate overdose. When Canned Heat appeared at Carnegie Hall on April 15, Hooker opened the show, but Carnegie Hall 1971 begins with two tracks from the band, “Framed” and “Let’s Work Together.”

Hooker joins them on “Hey Babe,” and while Bob Hite sang with energy and enthusiasm, he’s clearly an imitator next to the real thing. Hooker is on hand for the nearly 20-minute “Shake ’n’ Boogie,” which marries the band’s patchouli hippieness to Hooker’s pure blues. Canned Heat never sounded better. These long jams are typical late-’60s fare, and your enjoyment of them may require you to have been there the first time around -- in other words, if you used the gatefold jacket of Hooker ’n’ Heat to separate out seeds and stems, you’ll know what’s going on here.

While John Lee Hooker is the primary reason to hear this CD, another plus is the great and fiery guitar playing of the late, underrated Henry Vestine (1944-1997), who should have been one of the guitar heroes of the classic-rock era. Vestine burns brightly here, maintaining a high level of energy and inventiveness throughout. “Framed” will amuse old hippies like me because of its ’60s vibe and its mention of Abbie Hoffman, who was in the audience that night. 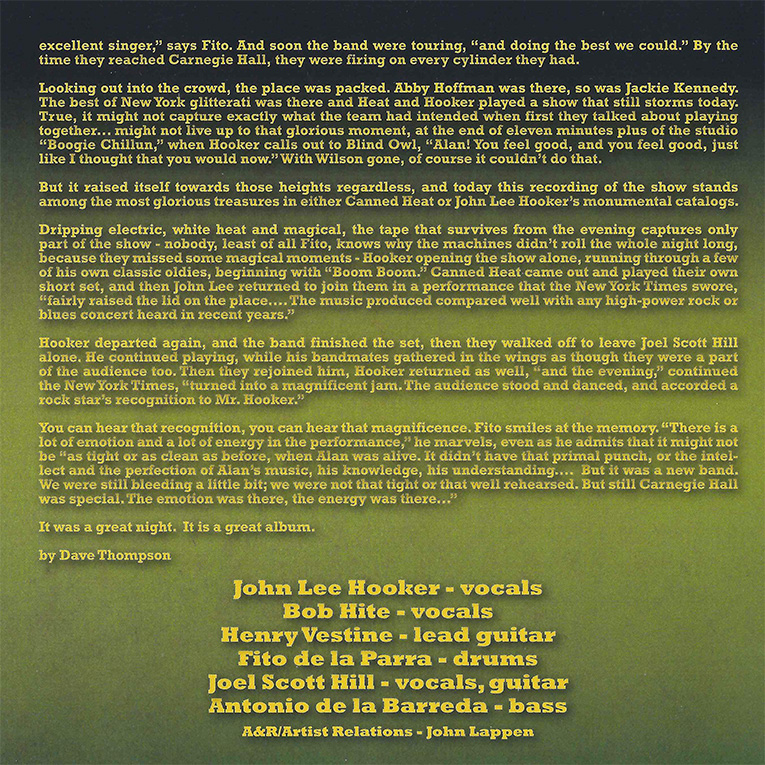 Canned Heat is a bit loose here, but they fit well with Hooker, who was notorious for his fluid use of time signatures and song structure. “Let’s Work Together,” which had recently been a hit for the band, fits well with the rest of the program and shows Canned Heat at its bluesy best.

This recording is not high fidelity -- a couple of tracks sound as if recorded on a handheld cassette player by a member of the audience. But that’s part of the charm of Carnegie Hall 1971 -- it reminds me of the days when I’d find bootlegged live recordings of my favorite bands in out-of-the-way record shops. The part of me that likes well-recorded music winced a few times as I listened, but the part of me that likes to hear a band playing as if they mean every note -- regardless of the sound quality -- thoroughly enjoyed it. John Lee Hooker brought out the best in these guys -- and they did right by him, too.