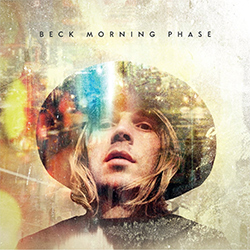 Although Beck hasn’t recorded an album of new music since 2008’s Modern Guilt, he hasn’t been goofing off. He’s produced recordings by Thurston Moore and Charlotte Gainsbourg, co-produced and contributed to Rework: Philip Glass Remixed, and played on several discs by other musicians. In late 2012 he released a portfolio of sheet music -- new songs in written notation for others to perform. His website shows a firm grasp of how useful current technology can be to a musician, and on it he hosts Record Club, which brings musicians together to reinterpret an existing work by another artist and post the results online.

Morning Phase, Beck’s newest, is a companion piece to Sea Change (2002), a fact underlined by the similar acoustic-guitar chords in the opening tracks. Actually, Morning Phase begins with a short piece for strings, “Cycle,” which David Campbell, Beck’s father, arranged and conducted. It segues effortlessly into “Morning,” which echoes “The Golden Age,” on Sea Change. “Morning” has more open chords, which ring out and sustain, giving the song a lighter feel than “The Golden Age.” The entire album has a dreamlike quality that lightens its themes of loss and loneliness, to give it an even more pronounced sense of hope than Sea Change.

Still, in “Blue Moon,” when Beck sings, “I’m so tired of being alone,” it’s heartbreaking. Morning Phase is deeply felt, with a strong emotional pull, but its beauty and complexity leave one feeling thoughtful and a bit exhilarated rather than melancholy. Although in “Unforgiven” he sings “Somewhere unforgiven / Time will wait for you,” he begins the song with the suggestion to “Drive . . . Away from the daylight / Into the Afterglow” -- hardly a hopeless place. In “Wave,” the deeply affecting string arrangement and the stirring vocal evoke feelings of sadness and loss, but the second verse is not at all resigned to fate: “And if I surrender / and I don’t fight this wave / I won’t go under / I’ll only get carried away.”

Beck has been attentive to the sound on Morning Phase, and on LP the soundstage is especially deep and wide. The acoustic guitars are expansive, with a powerful bottom end, and the bass playing, both acoustic and electric, has visceral impact. Details are easy to pull from even densely arranged songs, such as “Heart Is a Drum,” in which the interlocking acoustic guitar lines and swirling electronics are precisely located. Harmony vocals are exquisitely layered throughout the album, and the string arrangements are beautifully rendered.

The LP edition was pressed by Pallas, in Germany, and the vinyl is absolutely silent and beautifully finished. A download included with the LP is a 320kbps “vinyl experience” that sounds vastly different -- and better -- than the MP3 I downloaded from Amazon. You’ll want the digital version only for convenience, however -- I can’t imagine this recording sounding better than it does on vinyl.

Morning Phase is an “album” in the old-fashioned sense -- its 45 or so minutes should be experienced fully. Individual songs may grab you, but, as with Pink Floyd’s Dark Side of the Moon, the Beatles’ Sgt. Pepper’s Lonely Hearts Club Band, or Van Morrison’s Moondance, each track contributes to a completely realized whole. Morning Phase stands comparison with those masterpieces; like them, when it’s over, you’ll want to play it again.