Elvis Costello and the Roots: "Wise Up Ghost and Other Songs" 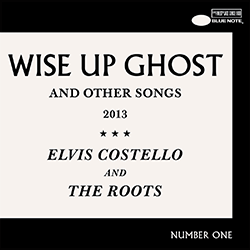 The cover design of Elvis Costello’s collaboration with the Roots, Wise Up Ghost and Other Songs, is based on the Pocket Poets series published by Lawrence Ferlinghetti’s City Lights Books, especially that series’ best-known title: Allen Ginsberg’s Howl and Other Poems (1956). A few of us who are around Costello’s age (he was born in 1954) still have our copies of Howl; perhaps the reference is to reassure us, and Costello, that we’re all still hip.

It’s easy to assume that the disc itself is an attempt to remain current. Costello’s other collaborations were with older, long-established musicians such as Burt Bacharach and Allen Toussaint. But the Roots aren’t exactly the new thing, and Costello doesn’t really tap in to the genre they’re known for: hip-hop. Instead, he takes advantage of the band’s considerable chops -- as well as its deep knowledge of pop music, the latter courtesy of drummer Ahmir “Questlove” Thompson, whose record collection must be as large and varied as Costello’s.

Wise Up Ghost revisits Costello’s section of the record store by sampling some of his earlier songs, and setting the lyrics of others to new melodies. “Invasion Hit Parade,” from his Mighty Like a Rose (1991), becomes “Refuse to Be Saved”; “Pills and Soap,” from Punch the Clock (1983), becomes “Stick Out Your Tongue.” It says something about how acute Costello’s observations were when older, topical lyrics from two or three decades ago can still pack a punch. The new versions, co-written with Questlove and Steven Mandel, are as memorable in their ways as the originals.

Like Costello’s last few discs, Wise Up Ghost veers into musical territory he’s covered before, but the arrangements introduce some freshness. “Sugar Won’t Work” features a baritone-guitar line by Costello and a strong backbeat from Questlove that pull you into the song. “Tripwire” opens with a sample from “Satellite,” from Costello’s Spike (1989), but Mark Kelley’s bass line and Ray Angry’s keyboards form the track’s backbone. Costello’s riff on Wurlitzer piano in “Refuse to Be Saved” sounds as if lifted from a chase scene in an episode of the 1970s detective show Kojak, and it drives the tune.

Steven Mandel engineered and, with Costello and Questlove, co-produced the disc. Mandel’s touches add texture to the music: The distortion on the kickdrum in “Refuse to Be Saved,” and the echoing voices that open the title track, set the tone and create an atmosphere that helps bring them across. The Roots have proved their versatility as the house band on NBC’s Late Night with Jimmy Fallon, and they serve Costello well here. It’s hard to imagine Costello’s own band, the Imposters, as good as they are, playing “Viceroy’s Row” with the relaxed funkiness the Roots bring to it.

Costello’s discs with Bacharach and Toussaint revealed more facets of his abilities as a songwriter and singer, and even brought out new talents in them. Wise Up Ghost is a good Elvis Costello album, but not one that inspires a similar reassessment. Questlove, however, is extraordinary. He seems to be able to play any style with ease, and goes deep in the pocket every time. The rest of the Roots play with conviction and authority as well, but I can’t help feeling that the opportunity for Costello to move in a new direction was missed.

The sound is very current -- that is, not entirely up to audiophile standards. Costello’s voice is out in front, but the instruments are crowded in behind him and the bass is often too prominent. I’d expect more from a Blue Note release. Next time around, such a collaboration should have more inspiration on Costello’s part, and better sound.