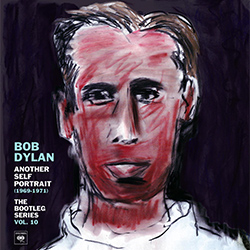 Dylan’s next album,New Morning, released just five months later, was much better, and critics were kinder. Another Self Portrait, Vol.10 in Dylan’s Bootleg Series,includes outtakes, alternate versions, and previously unreleased material from the period in which Dylan recorded Nashville Skyline, Self Portrait,and New Morning. A four-disc, deluxe version of the set, which retails for close to $100, also includes the complete performance by Dylan and The Band at the Isle of Wight Festival in August 1969, a remastering of the original Self Portrait, and a hardbound book of photos of Dylan from the years in which the recordings were made.The standard, more affordable ($20) two-disc set is the subject of this review.

Time hasn’t led to a reevaluation of Self Portrait, which included some odd choices of cover material, such as “Blue Moon” and Paul Simon’s “The Boxer,” and live tracks from the Isle of Wight show. It’s hard to tell if Dylan is now trying to encourage us to give a second listen to his least admired record, especially since he recorded some of the tracks on this set well ahead of Self Portrait,and others after he released New Morning.

Greil Marcus and Michael Simmons both contribute long essays that offer some insight into what Dylan was up to in this period of his life. Not surprisingly, Marcus’s assessment is bracing, informed by his broad knowledge of Dylan and American folk music.

I found it most enjoyable to just listen to Another Self Portrait without trying to place it in the context of Dylan’s history or legend. The alternate version of “All the Tired Horses” is stripped of the original’s treacly, overdubbed strings, but it’s still an odd tune. Apparently, Dylan played two sets at the Isle of Wight, and here the version of “Highway 61 Revisited” is more biting and bluesy. “Little Sadie” is just Dylan and guitarist David Bromberg -- no mandolin, percussion or bass, which were overdubbed later for Self Portrait. This simpler version is better.

Two tracks feature George Harrison. “Time Passes Slowly” is quicker and looser than on New Morning, and the previously unreleased “Working on a Guru” lets Harrison stretch out on some of the best county-blues playing he ever did. Another Self Portrait is a snapshot of a songwriter trying on his own work and some by others, whether contemporaries like Eric Anderson (“Thirsty Boots”) and Tom Paxton (“Annie’s Going to Sing Her Song”), or the old country and folk songs that inspired him.

As with other entries in the Bootleg series, Another Self Portrait also gives us a chance to see how Dylan works on his own songs. Comparing the two versions here of “Went to See the Gypsy” with the final version on New Morning gives us a glimpse of how Dylan thinks through songs -- which he almost invariably rethinks later, in concert.

Greg Calbi’s remastering ensures that Dylan’s voice is focused and sharp, and that the tracks featuring him and Bromberg bring you in close. The sound is strikingly clear and natural. Dylan fans may puzzle over some of the choices he and/or producer Bob Johnston made with Self Portrait, and I’m not sure Another Self Portrait will help answer any of their questions, but they’ll welcome this addition to the Bootleg Series.