Michael Feinstein: "Change of Heart: The Songs of André Previn" 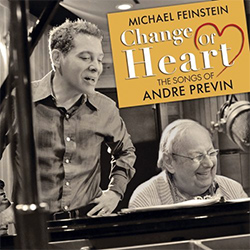 Michael Feinstein is a singer and pianist, but he is also, and perhaps primarily, an archivist of the Great American Songbook. Channel surfing the other day, I stumbled on Michael Feinstein’s American Songbook, which PBS first broadcast in 2010. Feinstein was visiting the Gershwin archives in San Francisco (they’ve since been moved to the Library of Congress). Feinstein was a friend of Ira Gershwin’s, and his extensive research of Gershwin’s recordings and sheet music helped ensure that the legacies of Ira and his brother George would be accurately and fully preserved.

Feinstein has recorded many discs of songs by his favorite songwriters, and has even, on occasion, been accompanied by them. In the liner notes to Change of Heart: The Songs of André Previn, he relates Previn’s reaction to his suggestion that they record an album together: “[H]is first response was concern that there wasn’t enough significant material to fill an album!” Feinstein convinced him by launching a “verbal assault” of titles of songs Previn had written.

Previn and bassist David Finck, who coproduced the disc with Feinstein, accompany the singer, and the result is an intimate recording of a dozen Previn songs. Feinstein is not a jazz singer; he doesn’t play with the melody or rhythm. He caresses the melody, and the feelings he expresses in a song flow out of the lyric. He brings just the right hint of light jauntiness to “Give a Little More,” from the soundtrack to Valley of the Dolls, and his gentle yet emotional performance of “Yes” is one of the most moving tracks here. Like an actor, Feinstein finds the core that defines a lyric and brings it out clearly. His job is easy when the lyricist is Previn’s ex-wife, the late Dory Previn (1929-2012), herself a singer-songwriter, who cowrote ten of these songs.

André Previn’s piano solos give these recordings any touch of jazz they have -- not surprising, given Previn’s long history in the music. He and Finck give Feinstein the room he needs, and his voice is the center of these performances, but many of the pleasures of Change of Heart come from hearing Previn create beautiful tapestries around the singer as Finck fills out the sound and solidifies the rhythm. When the three are in sync, as in “Goodbye,” they achieve perfection. Previn’s chords sustain and Feinstein rests on them, singing with such ease that it’s only after hearing the disc a few times that I realized how well he serves these songs, and how emotionally true he is to them.

The sound puts you in the room with Feinstein, Previn, and Finck -- you can hear the singer’s impeccable breath control and his subtle treatment of the melodies. The piano and bass also register clearly, and the soundstage is convincingly three-dimensional. Pour a glass of wine and sit back with Change of Heart. If you close your eyes, you’ll feel as if you’re sitting at a front table in a nice club.