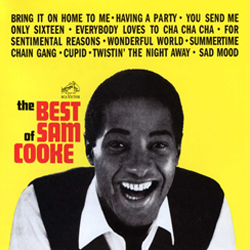 Sam Cooke is a significant figure in American culture and music: a singer whose effortlessly smooth and beautiful voice had just enough edge in it to help introduce soul music to white American kids in the late 1950s and on into the ’60s. His posthumously released single "A Change Is Gonna Come," which hit No.31 in 1965, was an early anthem of the civil rights movement, and Cooke himself came to embody the hopes, aspirations, and tragedies of African-American life. He had a profound influence on such later soul singers as Solomon Burke and Otis Redding, as well as on rock singers. Van Morrison, Rod Stewart, Cat Stevens, and the Band covered his songs, and Bruce Springsteen’s "Mary’s Place" is an homage to Cooke’s "Meet Me at Mary’s Place."

Neither "A Change Is Gonna Come" nor "Meet Me at Mary’s Place" is included on The Best of Sam Cooke, a 1962 collection of the singer’s hits originally released by RCA Records, but the collection is still a solid overview of Cooke’s presence on Top 40 radio. This Analogue Productions SACD/CD adds two tracks to the original 12: "Nothing Can Change This Love" and an alternate take of "Another Saturday Night." ABKCO’s SACD/CD edition of Portrait of a Legend: 1951-1964 includes the original version of "Another Saturday Night," along with the other tracks on this Best Of and much more, but is currently available only on CD. My copies of that SACD and an LP pressed in the late ’70s were my points of comparison.

"You Send Me" was the first single released under Cooke’s own name following his long association with the Soul Stirrers, a star attraction in gospel music. It opens The Best of, and on the Analogue Productions disc the SACD layer sounds as if it were recorded yesterday. Cooke’s voice is out in the room, individual voices in the chorus backing him are easy to pick out, and I can hear the snap of the spring reverb on the muted guitar lines. The mastering of the SACD layer of Portrait of a Legend has a natural analog warmth, but the Analogue Productions disc conveys a better image of the recording space.

Throughout the SACD layer of The Best of, small details such as rhythm-guitar lines and percussion are easier to hear and more precisely rendered than on previous masterings. The guitar arpeggios in "(What a) Wonderful World" have more body than on the ABKCO disc, and the impacts of brushes on snares ring out more solidly. The cowbell in "Everybody Loves to Cha Cha Cha" resonates, and the voices that open "Chain Gang" are more forceful. The bass guitar in these recordings is not the central presence it would become on later soul records, but there’s more bottom-end heft in this remastering than on the ABKCO disc.

Ultimately, it’s the qualities of Cooke’s voice that carry these recordings, and this new edition lets you hear how fluid and graceful his singing was, and gives a picture of his subtle phrasing. He brought enough gospel drama and grit to "Twisting the Night Away" and "Having a Party" to inject soul music into American radio, and this disc brings you much closer to the grain in his voice. The clarity of Analogue Productions’ SACD layer does highlight the sibilants on, for example, "Only Sixteen," which the ABKCO disc tamed a bit.

As much as I enjoy this new The Best of Sam Cooke, ABKCO’s Portrait of a Legend still has much to recommend it. Its 30 tracks cast a wider net over Cooke’s career, including his time with the Soul Stirrers, thus giving a better view of his accomplishments; the mastering is very smooth, and the music flows easily. The Analogue Productions disc has a different effect -- it pulls me further into the music, even though the limitations of tapes more than 50 years old are more apparent. Fans will want to own both, although if you want an SACD of Portrait of a Legend you’ll have to track down a used copy.

I haven’t mentioned my LP because, after hearing these SACDs, it sounds uninvolving and dead; I can’t imagine I’ll listen to it again. It’s more likely I’ll pick up Analogue Productions’ other edition of The Best of Sam Cooke -- on two 45rpm LPs.