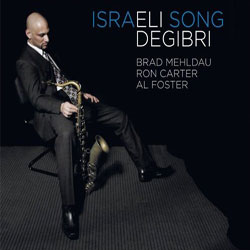 Eli Degibri is an Israeli jazz musician who started playing mandolin at age seven and picked up the saxophone three years later. When he was 16, he received a full scholarship to Berklee School of Music’s Summer Performance Program, and the school granted him another summer of study the following year. After further training at the Thelonious Monk Institute of Jazz Performance, Degibri toured with Herbie Hancock’s sextet for two and a half years beginning in 1999, when he was just 20. Since 2002 he’s fronted his own quartet, and he’s also a member of the band led by drummer Al Foster.

Foster anchors the rhythm section on Degibri’s fifth CD, Israeli Song, and veteran Ron Carter is the bassist. Brad Mehldau is the pianist, and relative to the other members of the rhythm section, he’s a youngster at 40. Players of this caliber aren’t attracted merely to a musician’s educational pedigree. The danger with players who have Degibri’s extensive training is an occasional reliance on technique, but he’s a fiery and exciting soloist. He’s also a remarkable writer. He penned six of the eleven tracks on Israeli Song, and his ballads are particularly affecting.

Mehldau’s "Unrequited" features Degibri on soprano sax, and his sure tone and strong melodic sense are immediately apparent. He plays with confidence, but he gives himself over to the song, adroitly balancing emotion and musical invention. Degibri’s "Mr. R.C." is a beautifully presented ballad, with the leader on tenor. He’s most impressive and confident on the four duets on Israeli Song. He finds new things to say in an old chestnut like Dizzy Gillespie’s "BeBop," which he plays with only Foster’s brilliant and subtle accompaniment, and he and Mehldau show an instinctive rapport on "Liora." Carter is lithe and alert on "Over the Rainbow," setting the tone for Degibri’s resourceful improvisation on a tune that many of us have perhaps heard too many times. Mehldau joins Degibri again on the title track, a beautiful ballad that showcases both musicians.

Degibri has a fresh ear for melody and a sure touch. I thought at first that "Mr. R.C." was a Broadway standard that I simply didn’t recognize until I read the song credit. "Manic Depressive" is a forceful, funky blues tune that all four musicians play in a loose, swinging style. "Judy the Dog" is reminiscent of John Coltrane’s Atlantic Records-era work without merely ripping off the master. Throughout the disc, Degibri’s ideas are fully fleshed out with good contributions from the other players. You never catch Foster showing off, but his playing, especially his cymbal work, is a delight. At 73, Ron Carter is still alive to the moment, and still finding new things to say on bass. I’ve sometimes found Mehldau to be overly cerebral, but his playing here is impassioned and fresh.

I occasionally wished I could sense more of the attack of the bass and drums in the very clean digital sound, but overall the recording and mastering are very good. Degibri and Mehldau have plenty of presence, and the recording engineer, James Farber, has done a good job of capturing the timbres of the tenor and soprano saxes. This disc is a solid step forward in a career worth following.