By March 1984, when Joe Jackson released his seventh album, Body and Soul, he’d already moved beyond punk and new wave. His fifth album, Night and Day (1982), and his score for the film Mike’s Murder (1983), had taken in other styles, indicating Jackson’s musical restlessness. Like those on Night and Day, the songs on Body and Soul defy easy categorization, but Jackson hinted at his jazz influences with the album’s cover art, which faithfully re-creates the cover of Sonny Rollins’s Vol. 2, photographed by Francis Wolff and designed by Harold Feinstein, and released on Blue Note in 1957.

Jackson and coproducer David Kershenbaum recorded Body and Soul at the Masonic Lodge in Brooklyn, which Vanguard Records used for classical recordings -- they were going for a big sound. The songs feature dynamic horn arrangements of nine original songs that embrace soul, jazz, romantic ballads -- and salsa, which Jackson had begun exploring on Night and Day.

The album’s liner note describes the care that went into the recording, including the microphones used: two vintage Neumann M-50s hung 15’ in the air, with others placed closer to instruments for balance. The result captured “The explosive sound of this stone-and-wood hall . . .” Jackson and the other players and singers recorded the music on a 3M 32-track digital recording system, and the result is neither clinical nor dry. It’s clear that, in the right hands, digital could sound just fine -- even in January 1984, only ten months after the launch of the Compact Disc in North America.

For Intervention Records’ reissue of Body and Soul on SACD/CD, Kevin Gray of Cohearent Audio remastered those original PCM digital masters in DSD. I bought the album on vinyl when it first came out, and picked up the CD a few years later. Bernie Grundman mastered that CD and the LP as well. I compared the SACD and LP: Gary Burke’s explosive drum attacks in “The Verdict” have more slam and force on SACD, each drum ringing out more fully. In DSD the chimes-like sound of Ed Roynesdal’s keyboard have more sparkle, and the horns sound more fleshed out. 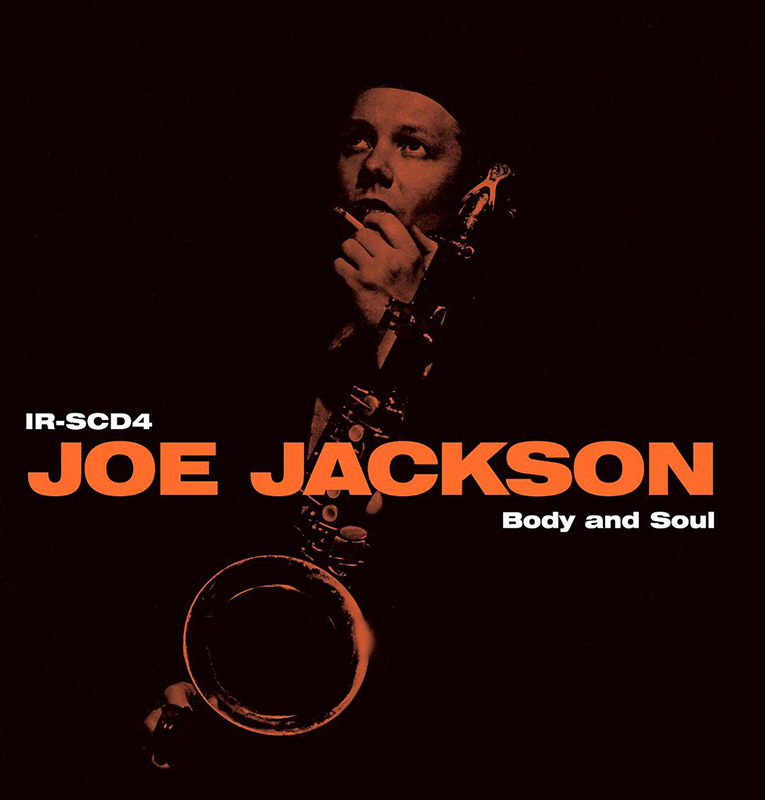 In “The Verdict” and throughout the album, Graham Maby’s bass is better focused and has greater impact in DSD. Burke’s snare drum has crisper, tighter snap, and stays sharp behind Jackson’s vocal. That voice is carved out more clearly, and is farther out front. The SACD doesn’t sound dramatically better than the LP, but instruments, voices, and the natural reverberation of the Masonic Lodge come through in better resolution.

When I then played my original CD, I remembered why I usually listen to the LP. The soundstage flattened, the bass became reserved, and the textures of Jackson’s voice were smoothed out. The bigger sound on the SACD and LP isn’t present on the original CD. Burke’s impacts of stick on cymbal bell in “The Verdict,” for example, lack the physical presence and clear tone they have from the other formats. When I returned to DSD, the music sprang back to life. The worthwhile comparison, then, is between the original LP and the new edition’s DSD layer.

With “Cha Cha Loco,” the SACD gave me more of the texture of the Latin percussion, and I got a better feel for the harmonic depth of the horn chart than the LP gave me. The claves and old-style beat-box percussion in “Not Here, Not Now” rang out more firmly from DSD, and the horns in “You Can’t Get What You Want (Till You Know What You Want)” jumped from the speakers with more authority. Vinnie Zummo’s terrific guitar solo, and his accents throughout the song, were cleaner and brighter.

The complex interplay of instruments in “Loisaida” is clearly reproduced in DSD, and Jackson’s piano sounds bigger, more resonant. The dynamics of this track are also more dramatic in the new mastering. Jackson’s piano in “Be My Number Two,” the album’s other hit, is a little more assertive overall in DSD. In general, I found that the SACD and LP both gave me accurate, detailed pictures of the instruments that the CD couldn’t, the SACD having an edge over the two other formats in both clarity and detail.

Gary Burke’s hi-hat in “Heart of Ice” sounds more naturally bright in DSD than from vinyl, and his kick drum punches harder. Again, the interplay of instruments is easier to follow in the new remastering, with more dynamic range. The drum echo that closes this track and the album has more satisfying impact in DSD, with a longer decay.

Kevin Gray’s remastering of Body and Soul has resulted in more resolution of instruments and voices, and opens up the music to let me better hear many of the elements that contributed to Jackson’s arrangements. I still find things to like from my 35-year-old LP -- whose shrink wrap, as I recall, bore a sticker declaring it an “audiophile” pressing. The soundstage on vinyl is wider than in DSD, and I find it a bit easier to “see” where harmony singers Ellen Foley and Elaine Caswell stand on that stage. 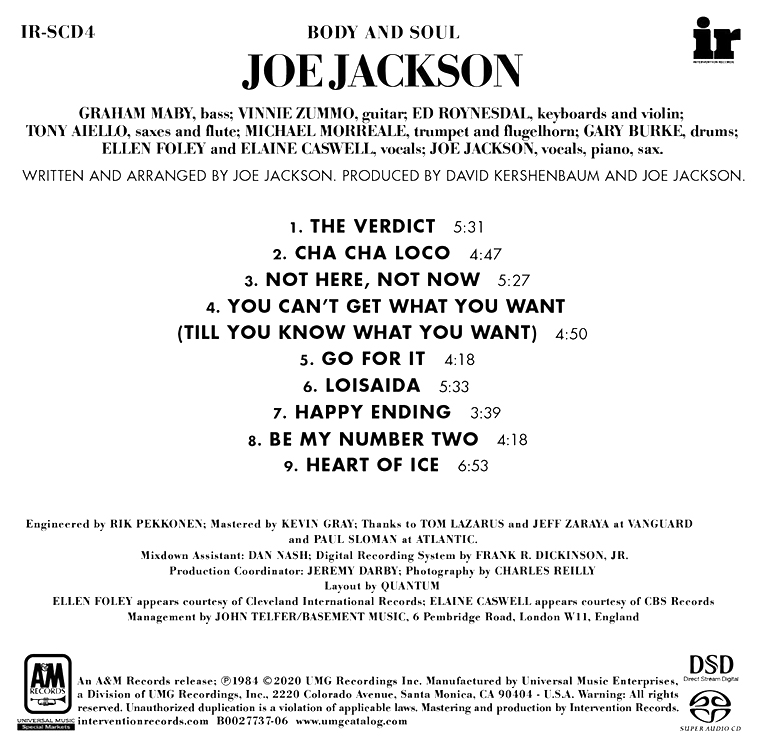 On the other hand, the SACD gives me more detail, and Jackson’s music more immediacy. Transients of notes have more impact, and those notes take longer to decay. All in all, I feel that the new SACD’s DSD tracks bring me a step closer to what took place in the Masonic Lodge in January 1984. The realism and tonal accuracy of instruments, and the impressive sound of the recording space, are palpable in this new remastering.

I also compared the new edition’s DSD and CD layers. The DSD tracks take me farther into the studio, with the musicians. However, the sound of the 16-bit/44.1kHz “Red Book” tracks is also impressive. Even if you don’t have an SACD player, you’ll find this edition’s CD layer a vast improvement over your old CD.

I hope that Kevin Gray and Shane Buettner, founder of Intervention Records, will also reissue Body and Soul on vinyl. But until they do, I’ll be perfectly happy to keep enjoying one of Joe Jackson’s best albums in this outstanding reissue.