Although John Scofield has appeared on ECM releases before -- as a co-leader, with Larry Goldings and Jack DeJohnette, of Trio Beyond on Saudades (2006); and as a sideman on three albums by bassist Marc Johnson -- Swallow Tales is his first outing as a leader for the label. Bassist Steve Swallow has appeared on ECM and its subsidiary labels Watt and XtraWatt many times, both as leader and sideman, and this album is Scofield’s tribute to his early teacher and mentor. It’s appropriate that Swallow Tales, comprising nine tunes by Swallow, is released on his home label.

Drummer Bill Stewart completes the trio, which has played together before, including on two earlier trio albums. They taped Swallow Tales in New York on a single afternoon in March 2019.

Swallow wrote “She Was Young” for Home: Music by Steve Swallow to Poems by Robert Creeley (1979), featuring singer Sheila Jordan. Here Scofield maintains the song’s lyrical flow while slowing the pace, allowing us to follow Swallow’s beautiful melody as it unfolds and develops. Swallow’s feature is a model of melodic invention built on the composition’s themes. For over nine minutes, “She Was Young” subtly changes in emphasis and dynamics while never losing focus or energy. 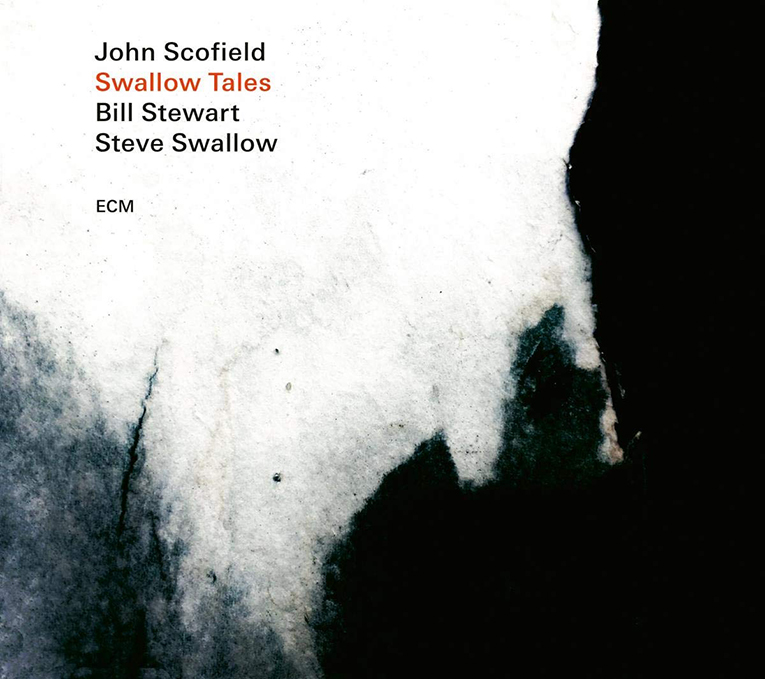 These nine compositions demonstrate Swallow’s exquisite talent for writing arresting melodies that stand on their own while serving as bases for inspired improvisation. “Away” is a stunning return to a ballad Scofield first recorded for Quiet (1996), an album of acoustic guitar to which Swallow and Stewart contributed. The trio plays it with sensitivity and grace, Stewart’s restrained brushwork strengthening the contemplative mood, and Swallow playing a smart, affecting solo.

The tunes on Swallow Tales reveal not only the variety of Swallow’s approaches to composition but as his ability to resolve his ideas. “In F” begins with a fractured, abstract melody and rhythm, then moves into a more focused and tightly structured section. “Radio” is light and refreshing but still substantial, and “Awful Coffee” is agile and swinging. 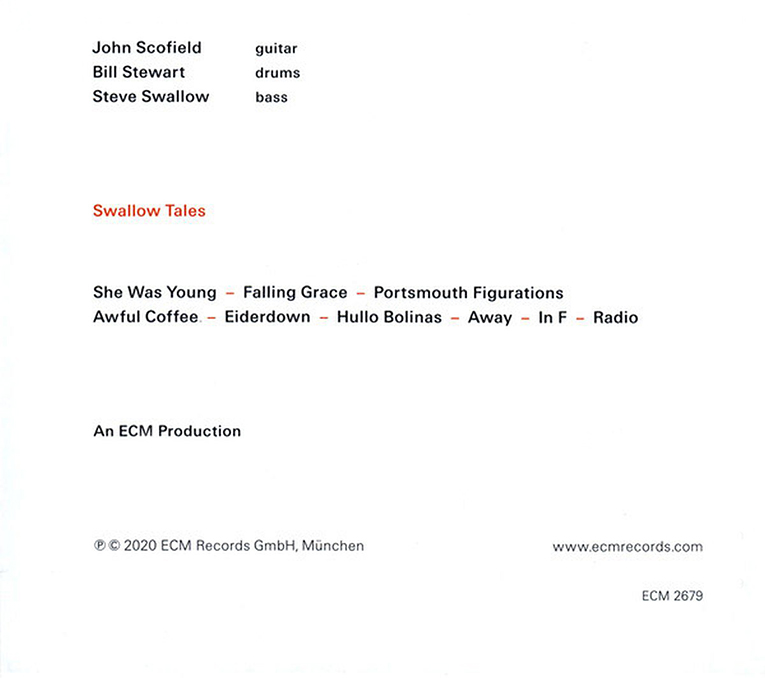 After more than 40 years of recording, with countless albums as leader and sideman, John Scofield still sounds fresh and ready to play, and seems especially energized on Swallow Tales. His occasional use of electronic effects, such as the tape loop in “Portsmouth Figurations,” is tasteful and appropriate to the moment. His tone, and the occasional distorted line, dissonant chord, or volume swell, are all familiar hallmarks of his style, but Scofield never creates the impression of revisiting old ground. His playing here conveys the delight and thrill of discovery that Swallow’s tunes have long given him.

The guitarist is immeasurably aided by two musicians who respond intuitively to his ideas. These three are so finely attuned to one another that any small change by one of them can effortlessly change the music’s direction. Stewart, a sophisticated drummer with a naturally flowing feel for time, anticipates when to emphasize ideas from the other players. Swallow is sharp-witted and quick on acoustic bass guitar, his solos suggesting that in those moments, too, he thinks as a composer.

The digital recording is pristine; the engineer, Tyler McDiarmid, himself a guitarist, has a good ear for instrument placement and clear resolution. I occasionally wished that the sound was a bit warmer, but the soundstage is well appointed, and I was easily swept into the excitement of the music.

John Scofield’s consistency is amazing. But even by his own high standards, Swallow Tales is one of the best of his many albums.