James Brown: "Live at Home with His Bad Self"

On October 1, 1969, James Brown performed with his band at the Bell Auditorium, in Augusta, Georgia, the city in which he spent much of his childhood. Brown’s time in the state’s second largest city was troubled, to say the least, but by 1969 he was a huge international star, and the city claimed him proudly. He was going to record his show there for release that December, but his plans changed, and instead he released Ain’t It Funky, a compilation of mostly instrumental tracks recorded between 1966 and 1969.

A little less than a year after the Augusta show, Brown released Sex Machine, a two-LP set of studio and live tracks. By then the band that had backed him the previous October had left, after he refused to give them a raise. Two sides of Sex Machine were recorded in the studio with his new band, which included bassist William “Bootsy” Collins. The remaining two sides comprise live tracks from the October 1969 concert. Live at Home with His Bad Self gives us, for the first time, the entire Augusta show in its full, unedited glory, in a 50th-anniversary edition. 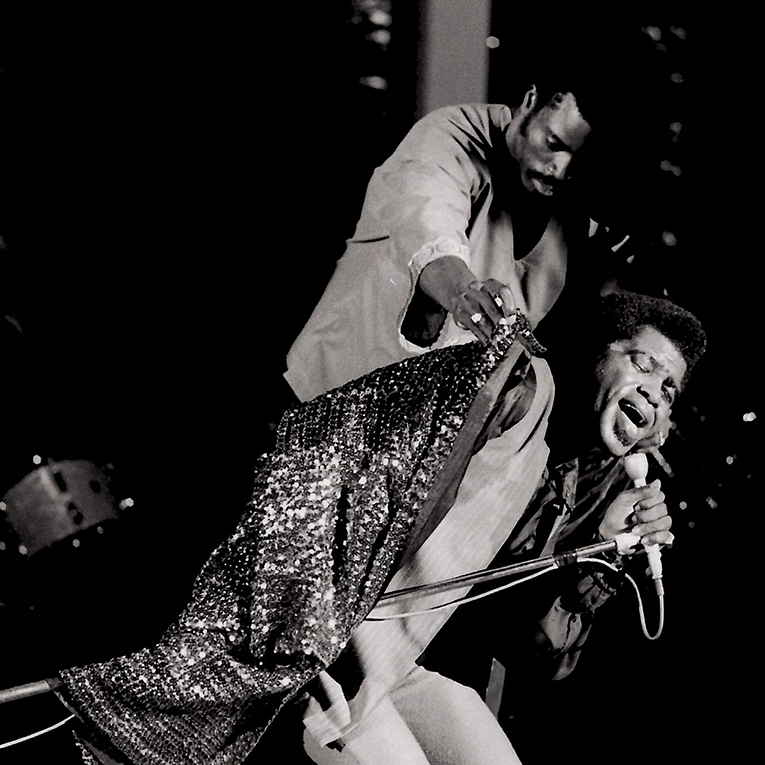 Brown begins with “Say It Loud -- I’m Black and I’m Proud,” which had been a hit single in 1968. His 12-piece band -- it had three drummers, usually two onstage at a time -- cooks behind him, and Brown is in strong, fierce voice. He pulls in the crowd for call and response as the band vamps, the drummers kicking things along. Brown then delivers a two-and-a-half-minute monologue in which he reinforces the message of black pride and empowerment and introduces “World,” another message song, which he sings to a prerecorded instrumental track that includes a string arrangement.

That slows the momentum a bit, but luckily the band returns for two instrumentals: “Lowdown Popcorn” and a cover of Blood, Sweat & Tears’ recent hit, “Spinning Wheel.” Maceo Parker tears things up on tenor sax in both, and the band, with Brown on organ, manages to make the latter sound actually funky. Brown had long sung Leslie Bricusse’s ballad “If I Ruled the World” in concert, and in this reading Sweet Charles Sherrell’s popping bass line keeps the music flowing.

The band shifts into a hot, swinging version of Leiber and Stoller’s “Kansas City,” and keeps things simmering through most of the rest of Live at Home. “I Don’t Want Nobody to Give Me Nothing (Open up the Door I’ll Get it Myself),” “I Got the Feelin’/Licking Stick-Licking Stick,” “There Was a Time,” and a nine-minute version of “Mother Popcorn” are white-hot, the band in tight formation and giving Brown the propulsive, funky, elegant backing he demanded.

Brown sneaks in more slow tunes along the way, reaching back to 1958 for “Try Me,” and to 1966 for “It’s a Man’s Man’s Man’s World.” Both demonstrate how versatile, precise, and responsive his band was -- in the second song, when they slip suddenly and subtly into a quick shuffle, the transition sounds effortless. 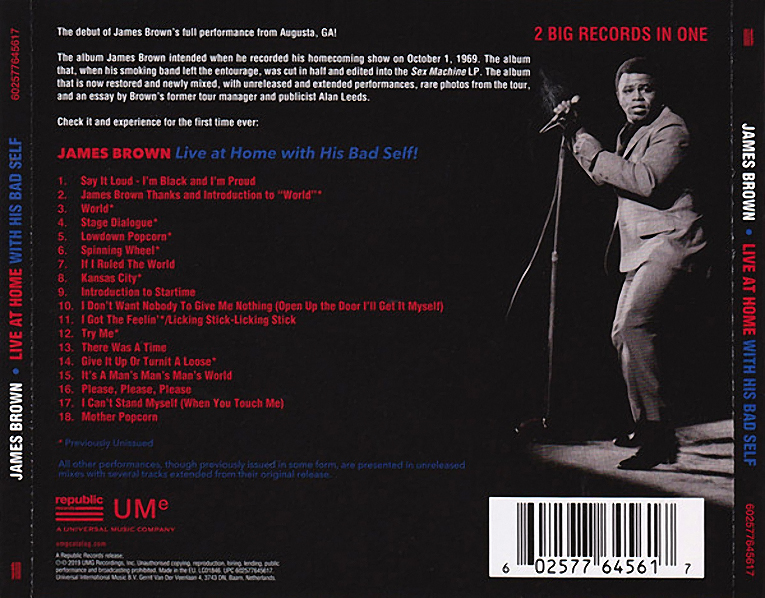 Live at Home with His Bad Self belongs in that august company, and the recording, probably by Ron Lenhoff of King Records, Brown’s label at the time, captures the excitement of the October 1969 performance. Peter A. Barker mixed and mastered, using just enough compression to underline the music’s drama and energy; still, I often wished I could hear the reactions of the paying crowd a bit better. Live at Home with His Bad Self is available on a single CD, on two LPs, and as a digital download. Don’t miss it.