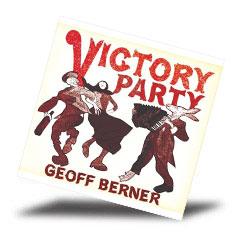 If you’ve read any of my previous columns, you probably know that my musical tastes aren’t easily categorized. I try to stay abreast of popular artists to keep culturally current, but I’m usually unimpressed with mainstream music and I find the "alternative" classification a farce. It’s the underground, unknown, oft-overlooked releases from small, independent labels or self-issued artists that excite me most. This month I’ve found four such gems, and I urge you to have a listen. While you may not read about them in Rolling Stone or hear them on a major radio station, these bands play with a passion and exuberance that comes with the territory of being brilliant, unimpeded, under-the-radar artists. I for one revel in such rawness.

I’m still undecided as to whether Geoff Berner’s Victory Party or Chopteeth’s Live disc is more frenetic, as both are dizzying in their energy and delivery. Victory Party (CD, MRD-132) gives klezmer a real kick in the pants. The Vancouver-based Berner is an accordion player with a punk-rock heart, and his backing band is a misfit mix of two New Yorkers on bass and clarinet, a female pair of classically trained violinists, and a percussionist and pianist. The songs are witty, cynical, and brash, taking aim at religious authority, politicians, pimps, and hipsters. There’s a haunting old-world sound at the root of their music, but it all comes crashing gladly into the here and now thanks to Berner’s satirical singing and the swirling soundscapes imagined by his band mates. I’m ready to join the victory party, comrades, and I’ve officially added punk-klezmer to my list of adored genres. 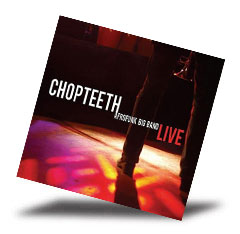 Afrofunk big-band Chopteeth, from Washington DC, caught my attention two years ago when I reviewed their self-titled debut studio release. Now they’re back with a killer live recording (Live, CD, Grigri003) that showcases the awesome energy and talent of this young band. And when they say big band, they’re not kidding: twelve base-member musicians are joined throughout the live show by six guests, each giving it their all to create impressively tight, long, live jams. Picturing all of these players and their varied instruments sharing a single stage in a packed nightclub is mindboggling. You can almost smell the sweat of the crowd, and the high-quality recording captures the sound of both band and audience so well that you’ll feel like you’re there in the mix. Produced with the support of the Arts and Humanities Council of Montgomery County, Maryland, the recording received serious attention in terms of arrangement and sound quality, and it shows in the finished product. Covering legends like Fela Kuti and Duke Ellington, the musicians give a nod to their predecessors while imbuing each track with their own style. If this band doesn’t get you moving, check your pulse. 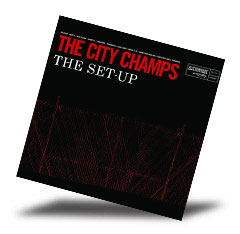 From those two amped-up, vocal-laden bands to two instrumental discs with a mellower but equally fresh twist, The City Champs and Gowanus Reggae and Ska Society (G.R.A.S.S) round out this month’s "Select Sounds." Organ trio The City Champs, out of Memphis, Tennessee, deliver a modern take on 1960s soul with their lounge release, The Set-Up (CD, Electrophonic ER 105). The trio comprises Al Gamble on Hammond B-3 organ, drummer George Sluppick, and Joe Restivo on guitar, but the recording also features guest horns, additional percussion, and bass on a few cuts. "Ricky’s Rant" and "Chinatown" are melodic tracks that weave a dreamy scene, while their cover of the theme from the television series Mad Men ("A Beautiful Mine" by RJD2) is as funky and intriguing as the original but altered enough to make you question its origin. 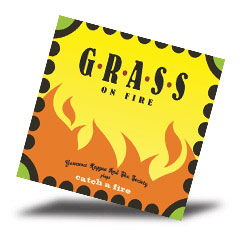 Another large band, this time from Brooklyn, New York, G.R.A.S.S features an evolving cast of musicians dedicated to marrying jazz and reggae. G.R.A.S.S. on Fire (CD, Mighty Gowanus Records) is their take on the 1973 Bob Marley classic, Catch a Fire, and it re-casts the music of Jamaica’s native son into nine contemporary tracks that trace a convincing lineage between the two seemingly disparate styles. The band’s take on the album doesn’t strictly adhere to the original, however. The song ordering is altered; the disc is almost entirely instrumental (aside from some hollow, dubbed-out chorus chants on "Slave Driver"); and in the case of "Kinky Midnight" the band melds Marley’s "Midnight Ravers" and "Kinky Reggae" in an original mash-up. Anchoring the sound, as you’d expect with most reggae, is the rhythm section, while the horns carry the melody and keyboards provide improvisational interpretation. Unexpectedly good, this creative homage to Marley is worthy of its association with the iconic artist, and with the genres of both jazz and reggae.

Looking for more inspiration? Just remember, the surface may offer some flashy, shiny objects, but be a musical miner and dig a little deeper on your own. Your rewards will be richer, and the extra effort will make your findings that much more worthwhile.