Want to Buy a Turntable? Here's What You Need to Know -- Part One

If you read SoundStage! Access regularly, you’ve seen the increase in our coverage of vinyl and equipment to play it on. LPs have been on the rebound for over a decade now, and many listeners prefer the sound of vinyl to that of digital sources. If you’re new to vinyl, you need to know that buying and setting up a turntable is not as simple as with a new digital source. It takes some skill, forethought, and knowledge. This and March’s articles will give you the information you need to make a good choice. 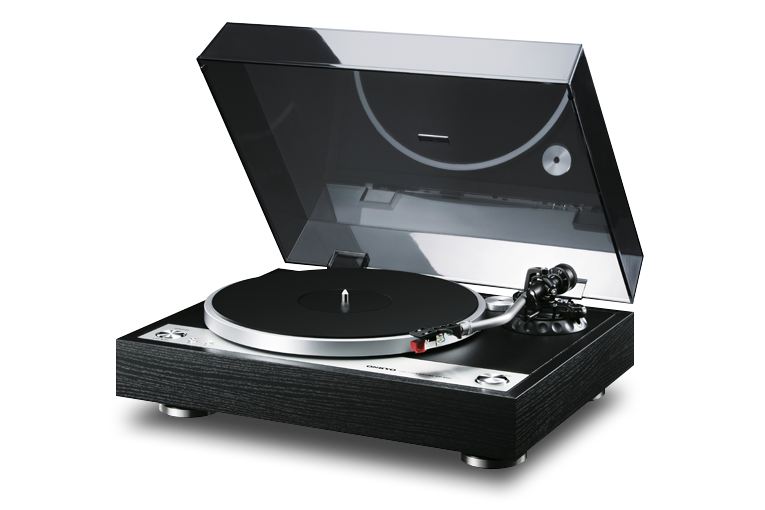 First of all, here are the basic terms you need to know -- the three primary parts of a turntable:

Platter: The disc that supports the record and, driven by a motor, spins it at 33.33, 45, or 78rpm.
Tonearm: The tonearm holds the phono cartridge. It is mounted on any one of a variety of pivoting mechanisms, to allow it to move back and forth and up and down.
Cartridge: Mounted at the front of the tonearm, the phono cartridge converts the motions of its stylus (or needle) into an electrical signal, which a phono preamplifier amplifies and equalizes to give it a level and tonal balance similar to other line-level audio sources.

Turntable types
With a manual turntable, the user lifts the tonearm, then lowers it to place the stylus in the lead-in groove at the outer edge of the LP, to begin play. At the end of the side, the user removes the stylus from the lead-out groove next to the record label by lifting the tonearm and then placing it in or on its rest.

A semi-automatic turntable requires the user to manually place the tonearm in the record’s lead-in groove to begin play, but automatically returns the tonearm to its rest at the end of the side, and then usually turns off the platter. Semi-automatic ’tables were very popular in the 1970s and ’80s, not so much today.

In an automatic turntable, the tonearm moves under its own power to a point just above the lead-in groove, is gently lowered to the disc, and, at the end of the side, returns to its rest and shuts off the platter. Obviously, the more automation involved, the more complex the mechanism built into the turntable, and the more there is to get out of whack.

Any of these can be a good choice, assuming the model is well designed and well constructed. 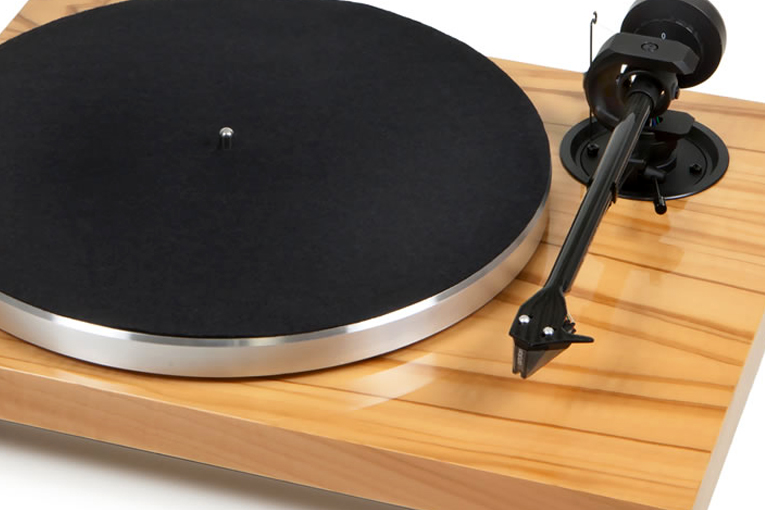 Turntable drive systems
Belt drive: Most modern turntables are driven by a rubber or polymer belt that is looped around the rim of the platter, or a sub platter, as well as around a pulley attached to the motor’s driveshaft. Proponents of belt-drive ’tables stress that the belt smooths the force that spins the platter. In many cases, the belt also provides the means to change speeds: the user loops the belt around a smaller pulley for 45rpm play, a larger pulley for 33.33rpm.

Direct drive: Direct-drive turntables are mostly relics of the last gasps of vinyl in the 1980s. In their case, the platter is directly driven by a high torque motor that can run at 33.33, 45, or 78rpm. In a direct-drive turntable, the motor is vertically oriented directly beneath the center of the platter, to which it is rigidly affixed; the record spindle is an extension of the motor’s actual driveshaft. They have their proponents and detractors.

Idler drive: Today, the idler-drive turntable is pretty much extinct. In this type of drive, the motor’s driveshaft and the platter are linked by a wheel -- the “idler” -- that usually has an outer surface of rubber. Idler drive was mostly used in the record changers popular in the 1950s and ’60s (not recommended), but some classic manual models of the era, made by Thorens, Lenco, and Garrard, et al., used idler drive even in their top models, which can be fine, if now quite expensive, options. 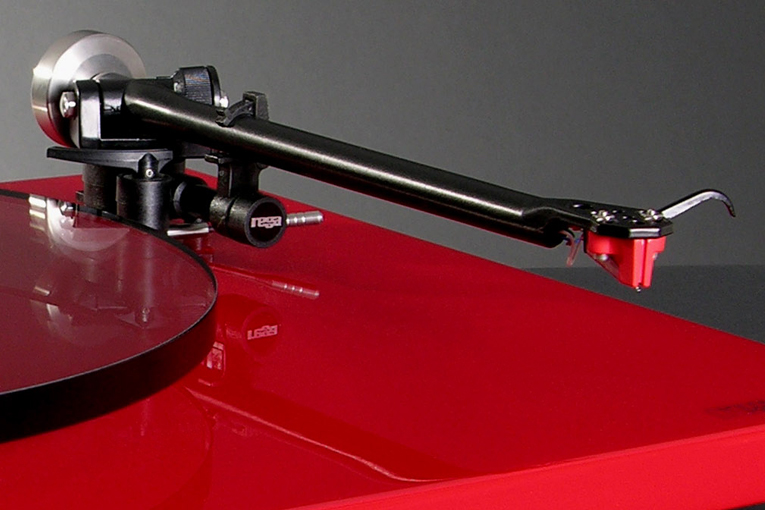 Vertical tracking force (VTF)
After the tonearm has been balanced, it’s necessary to apply the correct vertical tracking force -- the downward pressure the cartridge’s stylus will exert on the record groove. Usually, this is done by gently manipulating the tonearm’s counterweight. This is a very important adjustment; your turntable’s owner’s manual will give you thorough instructions in how to set VTF.

Antiskate compensation
A pivoted tonearm has a tendency to pull toward the center of the record (called skating), which can cause distortion and undue wear on the inner side of the record groove. Any good turntable design tries to compensate for this. Most entry-level ’tables have a dial that can be set to correspond to the vertical tracking force at which the cartridge is set, or a hanging weight attached to the back of the tonearm ala Pro-Ject. 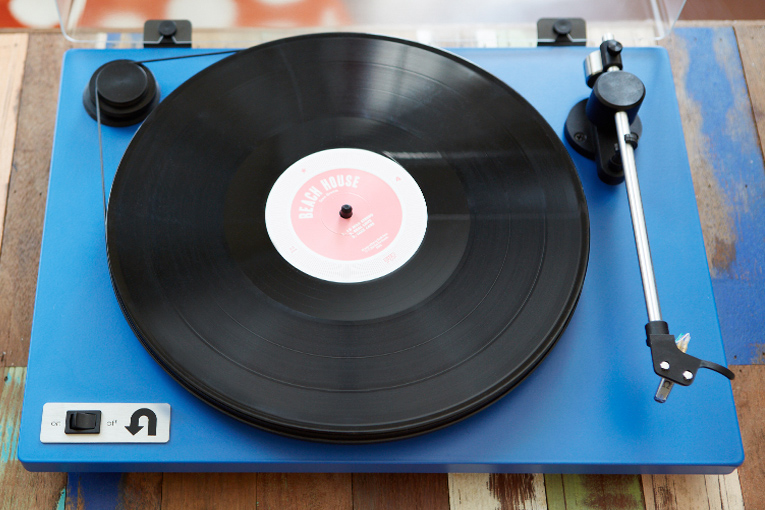 Should I buy a plug-and-play turntable?
There’s no such thing. I don’t know of a single turntable that comes ready to go straight out of the box. The user usually must place the platter on the spindle, install the belt (if it’s belt-driven), and set the vertical tracking and antiskate forces. In this context, “PnP” usually means that the manufacturer has done the really fiddly task of mounting the cartridge, giving you some assurance that it’s correctly installed. Mounting a cartridge can be a real pain -- as I’ve found over several decades. If you can buy a turntable with a factory- or dealer-installed cartridge, save yourself a headache and go for it.

What should I not buy?
Don’t buy a turntable that has no counterweight to balance the tonearm. Turntables without counterweights use springs instead, but these aren’t accurate to begin with, and can stretch over time and thus alter the vertical tracking force you’ve set. Many ’tables costing from $100 to $125 have this type of tonearm, but do your LPs a favor and stay far away from this kind of ’table.

Where should I place my turntable?
First, you want a sturdy surface that’s level from front to back and from side to side. Many turntables have adjustable feet that make leveling them easy. Use these feet, along with a good bubble level.

By “sturdy,” I mean that the support surface doesn’t move. In some setups I’ve had, the needle would jump out of the groove if I so much as walked past my record player. Not good. If you want to go all the way, look for a shelf that can be securely attached to your wall and will thus isolate your turntable from any motions of the floor (which are more likely to occur than motions of the wall). Such shelves aren’t cheap, but they can ensure a stable turntable platform.

Or look for a good, solid stand that won’t wiggle on a solid floor. These are available from many sources, but also are often expensive. However, such a stand will be a valuable asset to your system. 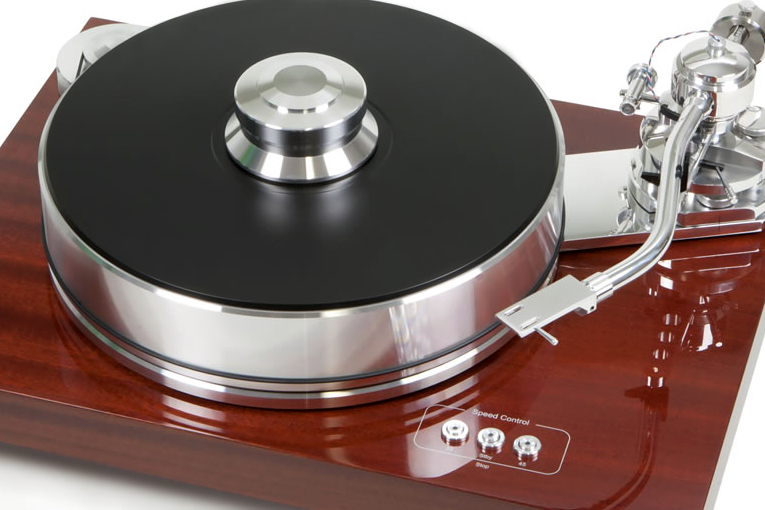 More turntable terms
Wow is a slow variation in the platter’s speed of rotation. In a turntable suffering from wow, sustained notes will resemble the sound of the word wow. Flutter is rapid variation in the platter’s speed of rotation. Wow and flutter are usually expressed as a single number: a fraction of a percent, such as “0.15%.” Look for turntables with a low specification of wow and flutter.

Rumble is low-pitched noise that resembles the sound of an approaching subway train or concrete truck. It’s shown in negative dB, as in “-68dB” -- the higher the number after the negative sign, the lower the amount of rumble.

Speed variation tells you how much your platter’s speed of rotation departs from a precise 33.33 or 45rpm, and is expressed as a percentage. For example, a turntable with a speed-variation spec of 0.25% will actually rotate within a range of 33.25 to 33.41rpm instead of always at 33.33rpm. The lower the speed-variation number, the better. 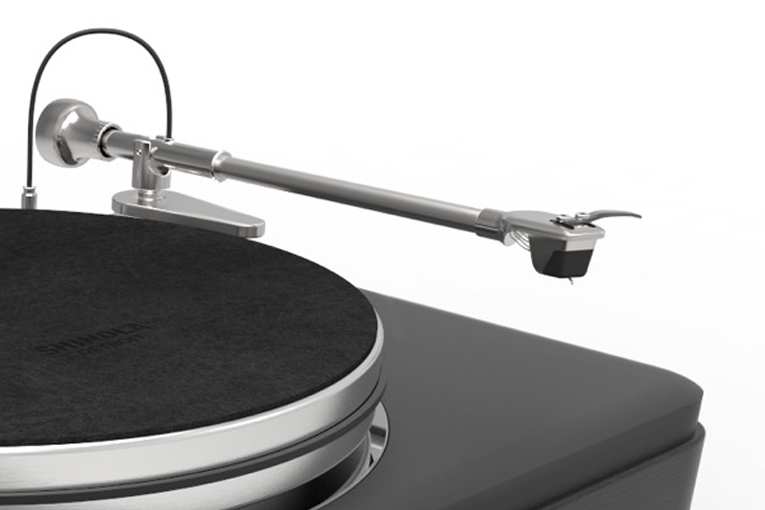 Phono cartridges
The phono cartridge is the business end of a turntable, and the business end of the cartridge is the stylus. The stylus -- the tiny bit of mineral that actually traces the record’s groove -- is mounted at one end of a short shaft called the cantilever. Moved from side to side and up and down by the irregularities in the groove, the stylus transmits those motions to the other end of the cantilever, where their mechanical energy is converted into an electrical current. How that conversion takes place can take one of several forms:

Moving magnet: Most cartridges used in entry-level turntables are moving-magnet (MM) types. The motions of the stylus and cantilever move a very small magnet at the far or upper end of the cantilever, which in turn generates electrical currents in stationary coils that surround the magnet’s travel. Those currents -- the analog musical signal -- are then sent to a standalone phono stage or preamplifier, which amplifies them before sending them on to the power amplifier to be amplified again. Some popular makers of MM cartridges are Audio-Technica, Ortofon, and Shure.

Moving coil: The other common type of cartridge, and the type most commonly used in the high end, is the moving coil (MC). Here, the motions of the stylus move coils that are attached to the far end of the cantilever, and that move within the field of fixed magnets to generate an electrical current. As these coils must be very light and thus have very few turns, MC cartridges tend to generate signals of very low voltage, which must be amplified greatly with a pre-preamplifier or step-up transformer before being sent on to the preamplifier. The most popular, accessibly priced MCs come from Audio-Technica and Sumiko.

Moving iron: The third common type of phono cartridge is the moving iron (MI), best typified by cartridges from Grado Labs and Soundsmith. In an MI cartridge, a piece of “iron” -- i.e., a substance with magnetic properties -- is attached to the opposite end of the cantilever from the stylus. Within the body of the cartridge is an arrangement of magnets and coils, all of them fixed, and all affected by the motions of the moving iron, which induce a current in the coils. MI cartridges are noted for their warm, smooth response, but also for their susceptibility to hum generated by the turntable’s motor. 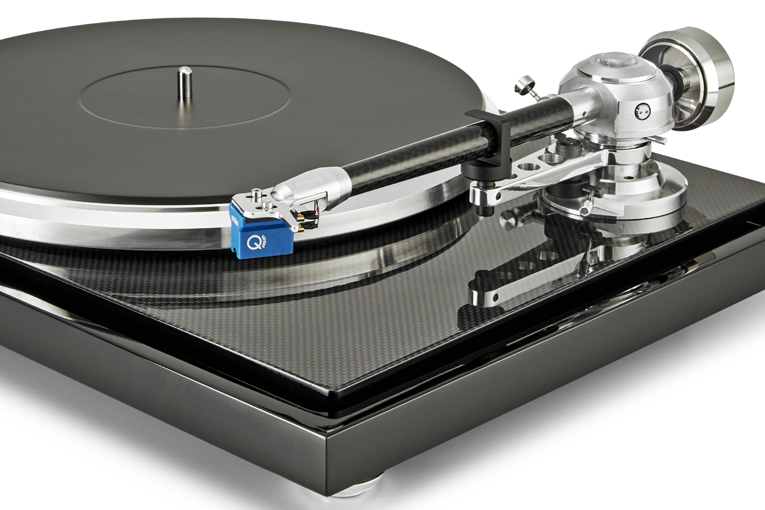 Stylus types
Conical: Conical styli are circular in cross section and usually measure 0.6 to 0.7 mil (that is, 0.0006” to 0.0007”) in diameter. The easiest to produce and thus least expensive of all stylus shapes, conical styli are adequate but may not trace the groove as well as other shapes. Also, they tend to need to track at high vertical tracking forces of 2.5gm and above. Buy a conical-stylus cartridge only if you’re on a starvation budget.

Elliptical: An elliptical stylus is oval in cross section; that is, it’s smaller from front to back than from side to side, usually measuring 0.3 by 0.7 mil or 0.4 by 0.7 mil. Elliptical styli are better than conicals at tracing the groove, and thus often produce better sound. They also cause less damage to heavily modulated record grooves than do conical styli, as they tend to need lower VTFs -- often 1.5 to 2.5gm.

Shibata, line contact, hyper-elliptical: These terms refer to a fairly complicated stylus design, originally developed in the early 1970s to play LPs of four-channel matrix recordings (SQ and QS). Line-contact styli are said to be able to trace the record groove better than any other stylus shape, and usually track at 1.5gm or less. They’re also the most expensive to manufacture and thus to buy, and require a well-designed tonearm for best performance.

In March, I’ll give you the rest of the information you need to be an informed turntable buyer.