It may seem a bit strange that we’re reviewing Rotel’s CD11 Tribute at a time when the compact disc is practically on life support. We’ve all seen the sales figures. In 2020, the music industry sold a measly 31.6 million compact discs in the US—the format’s worst showing since 1985, just two years after its debut. Overall, physical media represented just 9% of music sales last year, and CDs made up just over 56% of physical media sales in terms of units shipped and 42% in terms of revenue. Let’s split the difference and call it half. 50% of 9% is . . . well, you can do the math. The format represents an ever-smaller piece of an ever-shrinking pie.

We all know the reasons for CD’s decline, for its meteoric fall from grace after reaching its pinnacle in the late ’90s and early ’00s, when sales topped 900 million units. You don’t need me to tell you that poorly encoded MP3 files on cell phones were the bullet that mortally wounded the optical disc format, or that high-fidelity streaming pulled the plug on its life support.

I’m not here to bury the oft-derided CD while it’s gasping for its final breath, though. I’m here to explain why, in 2021, I’m reviewing a CD player. The short answer is, I actually had no intention of doing so from the giddy-up. The CD11 Tribute was simply a tagalong, foisted on me by Rotel to accompany the A11 Tribute integrated amp, which I actually asked to borrow.

It almost felt like an act of pity when I pressed the Eject button and slid a shiny disc into its tray. Grudging pity at that, since I had to drive halfway across town and dig some CDs out of climate-controlled storage just to sate the player’s appetite.

Like many of you, I’m sure—most of you, if the sales numbers are generally representative—I stopped buying compact discs a long time ago. In terms of mainstream, major-label releases, the last two CDs I purchased were Tool’s Fear Inoculum in 2019 and Joanna Newsom’s Divers in 2015. At the time of those purchases (pre-orders, actually), neither artist had embraced the streaming future, nor even digital downloads, so buying physical media was the only option. Both acts have since come to their senses, thank goodness, and released their catalogs on the likes of Spotify and Qobuz. Tool’s archives are even available in high-res for the first time.

You’ll notice, though, that I included a proviso in the paragraph above: “mainstream, major-label releases.” If you avoid such hair-splitting, I actually still buy a good number of CDs every year. But, as with the Tool and Joanna Newsom records, these purchases are an act of necessity, not preference. As some of you may have noticed, I’m a Deadhead, and every year as the leaves start to turn brown and the mornings begin to get chilly here in Alabama, I dutifully buy a subscription to the following year’s Dave’s Picks CD releases, a quarterly dump of live concert recordings curated by Grateful Dead audiovisual archivist and legacy manager David Lemieux, mastered to HDCD specs by Jeffrey Norman. Each release is limited to roughly 20,000 copies, sometimes a little more, sometimes a little less. But the arrival of a new Dave’s Picks box set four times a year is like a mini-Christmas for me. Each time a new set lands in my mailbox, I tear into the packaging . . . and promptly rip the discs to FLAC via JRiver Media Center. 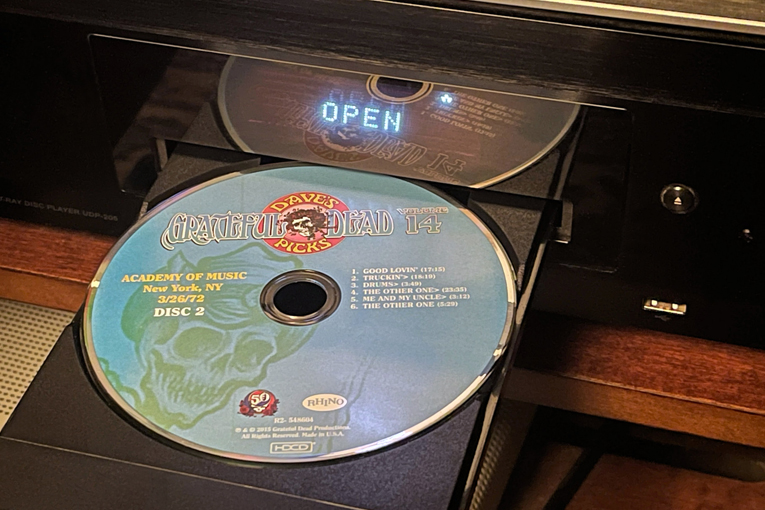 Now that I think about it long and hard, I don’t believe I ever actually plopped a Dave’s Picks disc into a CD player until the CD11 Tribute arrived. But a funny thing happened on the way to grabbing the remote and pressing the Play button: I found myself curiously invested in the process of actually playing the disc. The CD didn’t sound significantly better than the rip thereof, as extensive A/B testing in my review of the CD11 bears out. In fact, if anything, it was a weensy bit less dynamic, since Rotel’s player lacks HDCD decoding.

But in the process of interacting with the physical media, of holding the packaging in my hands as I listened, of disconnecting from the screens and software that facilitate digital listening, I found myself wrapped up in the ritual of actually, you know, playing a CD. For perhaps the first time, I think I understood what vinyl fanatics are on about when they wax poetic about tending to their fragile collections.

To put as fine a point on it as possible, I didn’t realize how much I actually missed the ceremonial inconvenience of putting a disc into a tray in order to listen to it. Take that feeling and crank it to 11 when I fire up a selection from the Dead’s May 1977: Get Shown the Light box set. That collection also came with a pretty fantastic book called Cornell ’77: The Music, the Myth, and the Magnificence of the Grateful Dead’s Concert at Barton Hall by Peter Conners. I was a bit shocked and ashamed to realize, as I sat on the floor of my office, feeding discs from that collection to the CD11, one at a time, that I’d never actually read the book. When the set arrived, I immediately ripped it to my hard drive and never touched its funky origami packaging again. 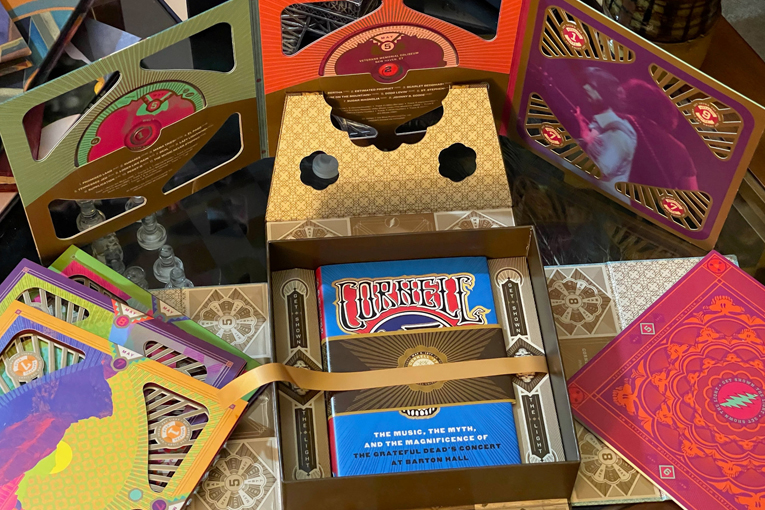 What I realized, though (and I’m sure a lot of you got to this party long before I did, but this is my byline) is that the process of unfolding that ridiculous container, poring over the liner notes, reading the accompanying book—all of that is an essential part of the experience of this album.

Mind you, that’s probably not valid for most of the music I consume. I’ve been rocking the 20th anniversary re-release of Soundgarden’s Superunknown in heavy rotation for the past couple of weeks, and I’m perfectly happy letting it stream from Qobuz. But for the truly special stuff, the quarterly Dave’s Picks releases, as well as the massive, limited-edition boxes that the Dead release annually, I think I’m actually regressing into a physical-media fan again.

That does pose a problem, though. I’m currently employing my old Oppo BDP-95 Blu-ray player as the disc-spinner and DAC du jour in my two-channel audio system. But a handful of times recently, I’ve fired it up for some A/B testing only to receive a “No Disc” error that points toward an inevitable end of its lifespan sooner rather than later.

I don’t really need a Blu-ray player in my stereo system, so I’d like to replace it with a good-but-simple CD player—something like the Rotel CD11 (although, in an ideal world, I’d still like one that can decode HDCDs). But Crutchfield currently carries fewer than 20 CD players under $1000. Things are even more dire on Audio Advice, one of the web’s most prominent American specialty electronics retailers.

Just as A/V manufacturers correctly read the tea leaves and got out of the business of building UHD Blu-ray players when the getting was good, fewer and fewer hi-fi companies are cranking out high-performance CD players, and too many of the ones that remain are far too rich for my blood. Even with my renewed commitment to the process of actually playing CDs in a dedicated player, I can’t imagine I would use one near enough to justify a $2000 or $3000 purchase. 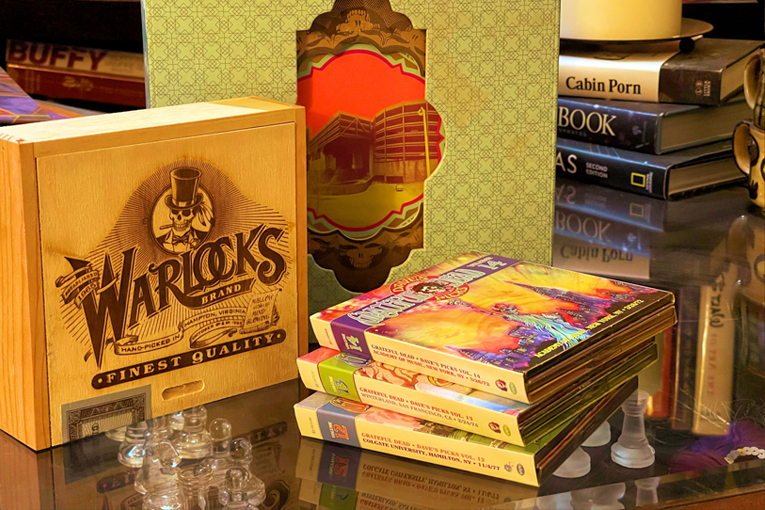 Maybe this feeling will pass. Who knows? I can be a bit of a capricious scamp. And there’s nothing to say that I can’t pull out the unwieldy packaging for May 1977 and scroll through its liner notes while I’m streaming my FLAC rip of its 11 discs. But something about the thought of doing so feels a little hollow.

At any rate, to answer the question I posed in the headline: who still buys CDs? I do. They’re getting fewer and further between, but as long as the Grateful Dead keep cranking out CD-only archival releases, I’ll still be inviting these polycarbonate/aluminum sandwiches into my home and clearing space for them on my shelves. I just hope companies like Rotel keep making good and affordable players in which to spin them.