The Danger of Standing Still

“Make no mistake, moving is living . . . the slower we move, the faster we die.” So said Ryan Bingham (George Clooney), the work-obsessed loner in the 2009 film Up in the Air. “Tonight, most people will be welcomed home by jumping dogs and squealing kids. Their spouses will ask about their day, and tonight they’ll sleep. The stars will wheel forth from their daytime hiding places. And one of those lights, slightly brighter than the rest, will be my wingtip passing over.”

“Moving is living.” The sentiment powerfully resonates with me. 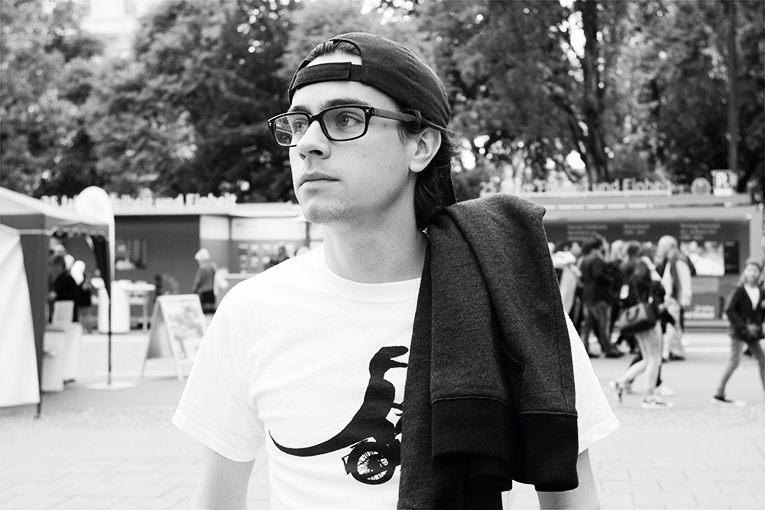 History is important. It helps us understand the past, so that it can better inform our present and future. The battlefield maneuvers of a 1000-year-old conflict, the writings of a 19th-century philosopher, the outcome of yesterday’s business meeting -- all are worthy of consideration for possible application to our life in the present. Just as important is harnessing whatever knowledge and wisdom we have accrued to our forward movement. For me, like Ryan Bingham, moving is living. I much prefer exploring what is unknown to me -- and occasionally getting tripped up by it -- to the security of passivity. But generally, I’ve found, the high-end audio segment does not.

I think it’s fair to say that the high end is populated mostly by old men. Old men tend to be conservative and, like my father, set in their ways. This is not a criticism -- I think it simply describes how things usually are. But concomitant with this notion is the idea that, if you can’t move past what happened yesterday, last year, or last century, you’ll find meaningful progress awfully hard to come by. In high-end audio, most manufacturers seem to cling to the mid-1990s with one hand as the other reaches for retirement. The more “progressive” manufacturers are actually, at best, merely reactive, offering products they’re confident will sell in reasonable numbers, without being adventurous or pioneering.

A loudspeaker is a box that moves air. Around the turn of the millennium, Wilson Audio Specialties made some of the best air-moving boxes around -- I remember thumbing through the pages of Stereophile, hoping that one day I’d be able to afford my own pair of Wilson WATT/Puppys, which at the time retailed for about $20,000 USD per pair. Fifteen years on, Wilson’s Sasha Series-2 costs about 50% more, and looks . . . about the same. That’s not to say there haven’t been internal improvements, but outwardly, they look remarkably similar. Far from picking on Wilson, the same could be said of the offerings of innumerable other speaker makers, as well as of Grado Labs’ headphones (I own a pair), of Bryston Limited’s electronics, and others.

It’s one thing for a design aesthetic to be iterative and evolutionary. One need only look at Porsche’s 911 to see that change for change’s sake does not always rule. Unlike high-end audio products, however, fine automobiles have been and will continue to be considered cool. These days, no one wants to be burdened with the sight of a pair of speakers, hence the rapid rise in installation hi-fi. And it was amazing to recently watch headphones leap from irrelevance in a frenzy of rebirth inspired by Beats by Dr. Dre. And yet, Wilson Audio’s best-selling speaker, Grado’s Prestige headphones, and nearly everything made by Bryston, have all the appeal of a DeLorean. Which is to say, they would have looked great in the 1980s.

I fear for these companies, and for many others. Their balance sheets may be strong now, but at some point, the audiophile establishment’s relevance and buying power will fade. In their place will be a new generation of audiophiles who are not attached to decades-old paradigms. I firmly believe that our increasingly more interconnected social tapestry will have little patience for big, ugly boxes that demand that the spaces they inhabit yield to their sonic and visual demands. Given the advances in manufacturing and design since the turn of the century, this broad, industry-wide lack of inspiration is something of a tombstone. The monument is most definitely there, even if the expiration date has yet to be inscribed. Precious few are daring to create special products -- offerings that are more than mere “me too” designs. 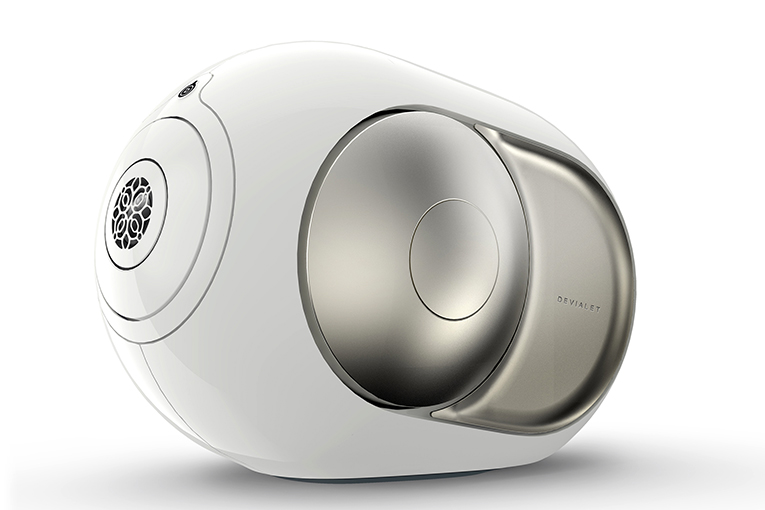 Devialet remains, for me, the great experiment. Their Expert line of amplifiers, which the audio press seems unanimous in raving about, has taken a back seat to their Phantom wireless loudspeakers. A year after their announcement, I have at least received a pair of Silver Phantoms for review. There’s nothing else like them on the market. The next few weeks of listening will reveal if their sound quality matches the French company’s ambition, but the Silver Phantoms’ daring, inspired design is laudable, even if it’s not beautiful.

Then there’s World of McIntosh (WOM), formerly called the Fine Sounds Group, owner of such storied audio brands as Audio Research, McIntosh, Sonus Faber, and Wadia. In the past few years, each of these companies’ product lines have been thoroughly reworked and reinterpreted. Sonus Faber’s line of speaker models is arguably the most attractive in the entire industry, with absurd attention paid to every detail, while Wadia’s electronics are no longer the quirky black boxes of old, but sleek, pretty things molded of glass and brushed aluminum. 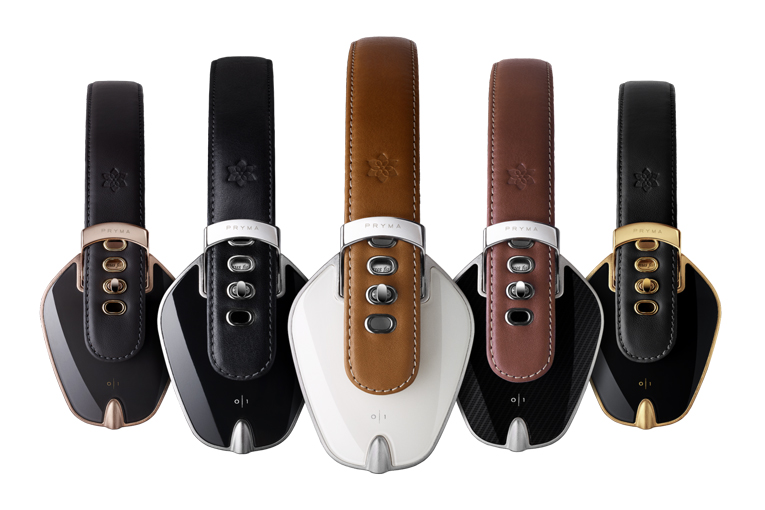 Of particular interest to me is WOM’s newest creation, a headphone company called Pryma. “Fatto a Mano da Sonus Faber Italia” (Made by Hand by Sonus Faber, Italy), Pryma’s first product is the 0|1: circumaural, closed-back headphones ($500-$550) that reek of quality. I just received a review sample clad in carbon fiber, and I’m floored by their quality of manufacture and assembly. The leather for the headband is supplied by local Italian furniture makers. The belt-style buckle is of copper and stainless steel. The earcups are of nickel-coated aluminum, with plush earpads of leather. High style is not generally a concern among headphone wearers, but Pryma is catering to a more mature, refined audience. The only headphones sold by Barneys New York, the luxury department store, are the Pryma 0|1s. That should tell you all you need to know about their craftsmanship.

Devialet and World of McIntosh are making traditional hi-fi components look like relics. I’m not bending over backward to compliment these firms, or taking cheap shots at established names with conservative design philosophies. Rather, it’s an articulation of the fact that the bar is set incredibly, worryingly low. Based on looks and feel alone, I would much rather have a pair of Sonus Faber Olympica III speakers in my listening room than a pair of Wilson Audio’s more expensive Sabrinas -- I can’t possibly be alone in thinking that. Anyone would prefer a Devialet amplifier or Wadia Intuition 01 to a hulking Bryston. And I dare readers to try a pair of Pryma 0|1s and not conclude that they’re some of the prettiest headphones available -- if not the prettiest.

Obviously, none of the above takes into consideration sound quality. There is clearly still a market for traditional audio gear with traditional looks and traditional execution. But Devialet’s Phantom speakers, Pryma’s headphones, and Sonus Faber’s speakers are evidence of a concerted push to appeal to everyone else. The high-end cognoscenti may not care about this, or be terribly worried by it, but they should be. Moving is living.