Two basic design features differentiate single-ended and balanced interconnects: the number of wires inside the cable, and the connectors at the ends. Also known as XLR, for the type of connector used on it, a balanced interconnect has three wires: one each for the positive and negative signals and the ground. A single-ended cable, sometimes called RCA for the connector used, has two wires: one for the positive signal, and one that carries both the negative signal and ground. An XLR connector has a pin for each of its three wires, while an RCA plug has a center pin (positive) and an outer barrel (negative/ground). So while an XLR’s ground pin is not connected to the connector’s outer barrel, an RCA connector’s ground connection is its outer barrel. That’s why, if the outer barrels of two RCA plugs touch, as can happen when the jacks are too close together and/or the plugs are too fat, hum and/or other types of signal degradation can occur as the left and right negative signals interfere. Because of this, many cable makers cover the outer barrels of single-ended cables with insulating shrink wrap. 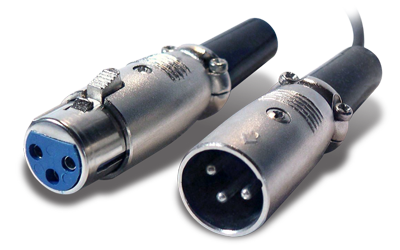 What, precisely, is "balanced" in a balanced cable? Well, nothing in the cable itself -- what it does is connect two devices that, because their inputs and outputs have been designed to conform to the XLR specification, have matched values of impedance, or resistance. This means that the signal noise (such as voltage) will be at the same, or balanced, level in both. Because amplifiers amplify only the differences in a balanced signal, the common noise is not amplified and the audio signal is thus cleaner.

Theoretically, balanced cables should sound better than single-ended cables, but that’s clearly not the case. I’ve never come down on one side or the other of the debate of balanced vs. single-ended, as there are too many variables in cable design to be able to say definitively that one type sounds consistently better than the other. I’ve heard great cables from both camps, but I can’t say that one or another was better because it was a balanced or a single-ended design. Balanced cables should, all else being equal, at least measure better than singled-ended designs, especially in electrically noisy environments. But the audible differences might be very small or nonexistent. 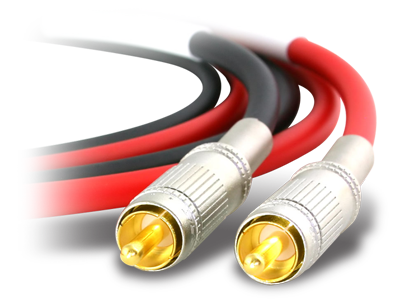 Just as each of the different ways a cable can link components has its own camp of supporters, there are fans of different materials with which to insulate those cables. By definition, an insulator, or dielectric, is a material that does not conduct electricity, which is why such materials are used to prevent wires from touching each other or other conductive substances, and thus shorting out or causing injury or damage. Probably the insulating material most commonly used in audio cables is polytetrafluoroethylene (PTFE), or, to use its common trade name, Teflon. Invented by accident in New Jersey in 1938, PTFE has properties that make it an excellent electrical insulator. It is highly heat-resistant (which is why it can be used to coat nonstick pans) and is chemically nonreactive, so it won’t combine with metals or their oxides to degrade them over time. It’s also quite flexible.

But does PTFE "sound" better than other materials? There are those who swear that PTFE is a vastly better-sounding insulator than another commonly used plastic, PVC. Unfortunately, I’ve never come across cables sheathed in PVC and PTFE that are otherwise identical, so I’m not sure how anyone can claim that one material sounds better than another. It’s true, though, that PTFE is pretty much the default insulator in higher-end cables.

If plastics aren’t your thing, then perhaps natural cotton or silk are the insulators for you. Those who sell cables sheathed in these materials claim that they sound more pure and natural. Perhaps, but a major downside to cotton and silk is that they keep out neither moisture nor air. That means whatever metal they sheathe will oxidize along its entire length, whereas the worst a cable sheathed in PTFE or PVC might experience is a little oxidation where the wire leaves its sheath to be soldered to a connector. Oxidation is not something you want in a cable, so some manufacturers of cotton and silk insulators impregnate them with natural oils.

If woven natural fibers and manmade chemicals aren’t to your liking, there are other options to explore. Although rare, some paper-insulted cables are made. Like other natural fibers, paper is porous to air and water, and may well react with any metal it touches, thus speeding up oxidation. That will greatly depend on how the paper is made; acid-free paper will likely be more friendly to copper and silver than papers with high acid content. Another product that can serve as electrical insulation is varnish. In the Litz-type wire mentioned in a previous installment, each strand of wire is individually varnished, but we’ve also seen single-strand, larger-gauge, untwisted wires that are coated in varnish and used as both interconnects and speaker cables.

Some say that the best insulator is no insulator at all. Adherents of that philosophy have two ways to go: using bare wires, or employing a complex and expensive vacuum system of the sort used by TARA Labs. The air around the wire is removed, leaving nothing to oxidize it or possibly color the sound of the music signal flowing through it. The wire is surrounded by an airtight sheath, but tiny spacers are used to keep the wire from touching its spacesuit. With the exception of the small area of metal in contact with the spacers (often made of Teflon), such a cable is, for all intents and purposes, uninsulated. But in this case, nothing costs you something; the cost of the TARA Labs Zero includes several of those zeros tacked on the end of the price.

As we’ve seen in every episode of "Audio 101" so far, there are no absolutes in audio, and an individual listener’s mileage will vary. Some might find that PTFE extruded over a wire sounds good, but that one wrapped in Teflon tape sounds even better. Or that maybe a Teflon relative such as Kapton can give cotton a run for its money. As always, the advice is the same: Don’t get wrapped up in specs or hype. Just listen, and buy what sounds right to your ears.