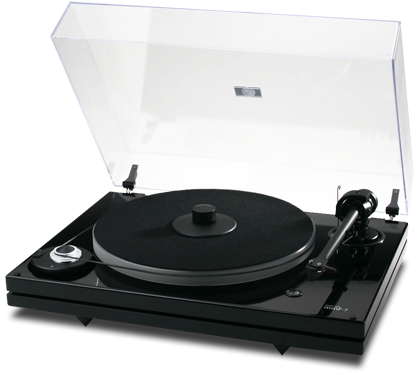 After being sidelined for a couple of months by the computer-audio saga, the “Audio 101” guide to analog audio sources is finally here. Hey, there’s an irony in there somewhere -- something to do with analog taking a back seat to the latest and greatest in digital sources.

In my humble opinion, analog audio is one giant pain in the behind. Analog is far and away the most labor-intensive way to get music off a recording medium and into your listening room. Done well, it’s also expensive. The kicker, though, is that excellent analog sounds absolutely wonderful.

Analog sources come in two major forms, only one of which is still made in any real quantity. Tape -- reel-to-reel and cassette -- is largely a relic of the past, and cassettes are (arguably) not a high-fidelity medium. Not many companies make these products these days, though it’s possible to find rebuilt high-end reel-to-reel tape decks. And by far the most popular analog audio source is, of course, the turntable.

Ten years ago you were unlikely to find a turntable in the average audio shop, but now most will offer at least a few models to choose from. More remarkable is that the market for high-end turntables (which I’ll arbitrarily define as having a selling price of more than $1000) is thriving. Why on earth is this so? I don’t really understand it, but I have a theory. I call it the Harley-Davidson effect.

In the world of motorcycles, Harley-Davidson’s models are anachronisms. They’re big, heavy, inefficient, and loud. In other words, Harleys are the antithesis of the sleek, modern, lightweight, and efficient bikes that Japan, Italy, and the UK churn out in massive numbers. Yet of all the world’s motorcycle manufacturers, Harley-Davidson is probably the most well known. If you want to know why, take a look at who buys Harley-Davidson motorcycles. You won’t find many 20- or 30-year-olds thundering about town on a hog.

With apologies to anyone who’s ever written at length about Harley-Davidson’s success, I think I can sum up why the company does so well in one word: nostalgia. And it’s a term that also explains the popularity of turntables. Not many Generation Xers and Yers go turntable shopping, but there are a lot of people who grew up with turntables who’ve gone back to vinyl in a big way. These folks didn’t go with turntables because they’re easier to use than a digital source, nor are turntables necessarily less expensive or better performers than the average digital source. If those three factors carried much weight, there would be very few purchases of turntables. No, I believe that people like vinyl because they’re comfortable with the medium and because it brings back fond memories. Not that there’s anything wrong with that.

As I said above, going the vinyl route is labor intensive. I’d wager that most people who get back into vinyl don’t appreciate this fact until they’ve already bought a turntable, a phono preamp, and a bunch of records. Only then do folks realize that both vinyl albums and the stylus on their phono cartridge get dirty and require frequent cleaning. Some folks even suggest that a record shouldn’t be played until it’s been cleaned -- each and every time. What a pain! I can honestly say I’ve never once cleaned the hard drive that holds my thousands upon thousands of music files.

Before digging deeper into this exposé of turntables, we should get to know their various components. There’s more to a turntable than meets the eye. Well, actually there isn’t, because its core components are all on display. One thing that makes a turntable different from, say, a CD player is that while the tray, servo, and laser in a CD player are unalterable design elements, the corresponding parts on a turntable can be replaced and upgraded. But before we think about replacing stock parts, let’s discuss what they are and what they do.

You spin me right round, baby 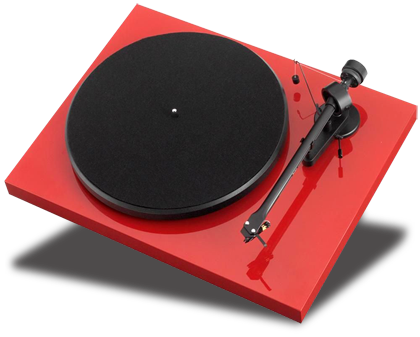 Distilled to its essence, a turntable is a machine designed to spin long-playing records at 33 1/3 or sometimes 45rpm. There are two main ways of getting the turntable’s platter -- the part the record sits on -- to spin: through direct drive or via indirect drive with a belt. Japanese manufacturers have long favored direct drive, while just about everyone else goes with belt drive.

The main advantage to direct drive -- having a motor directly coupled to a platter -- is that the rotational speed of the platter can be very precisely controlled. As everyone who’s ever heard a turntable spinning a little too fast or slow can attest, the audio effects of an off-speed motor are immediately noticeable.

Why the obsession with vibration control? It turns out that turntables are very low-voltage audio sources. In fact, except for the motor, no other part of the turntable uses outside electricity to power its operation. The cartridge -- often incorrectly called the needle -- is actually an electrical generator that produces current by bouncing around in the grooves of a record, but more on that later. For now keep in mind that any vibration that doesn’t come from the record is a very bad thing.

In addition to using belt drive to keep vibration to a minimum, most turntable makers also carefully choose platter material to avoid vibration. These materials range from medium-density fiberboard (MDF) on lower-priced tables to lead-shot-filled acrylic platters that weigh dozens of pounds. Some makers use glass platters, while others use straight (unfilled) acrylic, exotic woods, or composites. Some platters are thin, but you’re likely to find thick platters on turntables that cost more than a couple of thousand dollars. When manufacturers use materials that are more naturally prone to vibration -- think metal and glass -- they’ll often use vibration-dampening turntable mats. 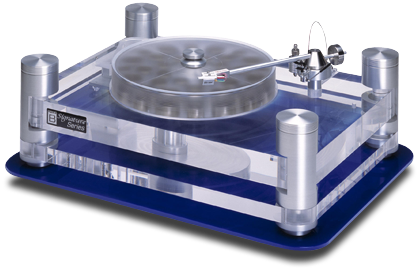 The motors that spin the platters come in two major forms: AC (alternating current) or DC (direct current). DC motors are generally free from the AC line noise that’s present in your home’s electrical feed, but they require additional electronics to convert AC to DC and to control the speed of the motor. AC motors don’t naturally filter out line noise, but they’re simpler because they can control their speed by using the alternating frequency of the supply voltage (50 or 60Hz, depending where in the world you live). Higher-end AC motors generally come with additional speed-control circuitry, so they aren’t necessarily simpler in design when compared with DC motors. In tables with very heavy platters, the motors sometimes get an assist from flywheels, which hang from the platter and, once up to speed, present an easier ongoing load for the motor by imparting momentum to the platter.

Drive belts also come in a variety of materials, from rubber to audio tape and other exotic materials. The number one requirement of any belt is that it should never stretch, as any stretching will slow down the platter. Another main requirement is that the belt not slip as it spins the platter. A slipping drive belt would make late-night Pink Floyd listening more interesting, but it would otherwise be annoying as heck.

Platters usually reside on a chassis, called a plinth. In many cases the plinth is also home to the drive motor and offers a base on which to mount the turntable’s tonearm. As with platters, plinths can be made from a wide variety of materials. And like platters, the key performance factor for a plinth is that it doesn’t transmit outside vibration. Some plinths are made of a thick slab of material -- be it wood or acrylic or even metal -- to mass dampen any vibration. Others use a sandwich of materials to achieve the same result. Typically, the more expensive a turntable, the thicker and heavier its plinth will be. In addition to offering a higher level of isolation from vibration, a thick slab of just about any material also looks pretty awesome.

Next month we’ll dive deeper into turntables by looking at the parts that actually make music: the cartridge, stylus, tonearm, and phono preamplifier.