Normally, the Noachian weather we’re having here in central Alabama at the moment wouldn’t be a matter of concern for SoundStage! Access readers. It seems relevant, though, given that our recent flooding threatened to derail my upcoming review of the Technics SU-G700M2 integrated amp ($2699, all prices USD). Or so I thought.

I’d been eyeing the door, waiting for the package to arrive, since I knew it was coming via FedEx, which meant that if it arrived at the correct address at all—not a safe assumption—there was at least a 50-50 chance it would be unceremoniously dumped in my wife’s flower bed. By some miracle, it not only came to my house but also made its way to my covered front porch. It didn’t, however, make it as far as the table for packages by the front door. Instead, it landed in an inch of standing water, and by the time I could rush from my office to the door to snatch it up out of the deluge, the box was soaked. With a bit of drying, though, it quickly became obvious that this wasn’t the first time the package and been left sitting in standing water. The cardboard was falling apart. 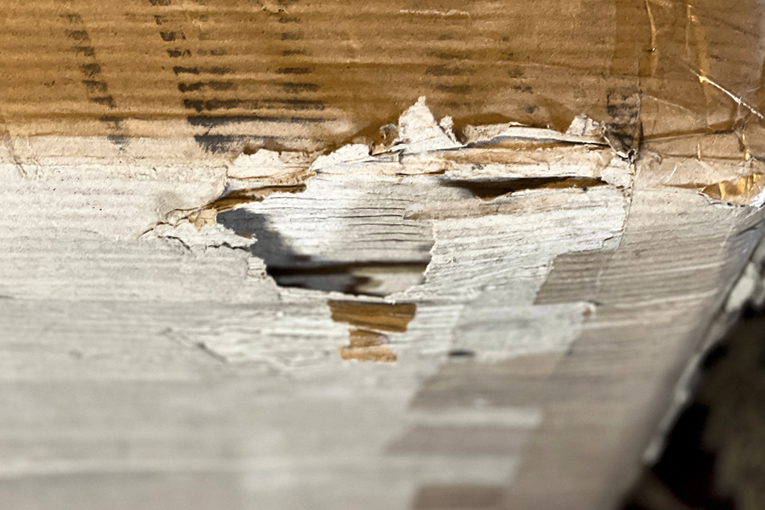 Normally, I would have left the box sitting in the foyer until I finished with my current review, but I wanted to get the amp out of its wet clothes ASA-freakin’-P. Even after hitting it with a hair dryer and leaving it in front of my Vornado for an hour or so, opening the packaging felt more like peeling fruit. The outer layer of cardboard simply sloughed off. Beneath that shed and shriveled skin, though, lay what looked to be a pretty pristine inner cardboard container. Maybe all wasn’t lost after all. 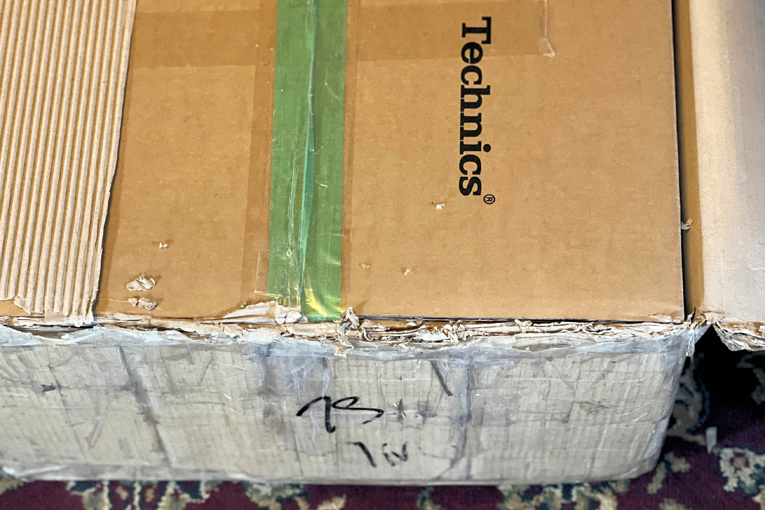 Indeed, a quick peek inside the inner carton revealed no water damage and an amp that was secure and well-packaged, despite having obviously passed through a few reviewers’ hands.

Technics obviously took a “security over presentation” approach to the packaging with this one, especially as compared with the swanky container for the company’s much pricier SU-R1000 ($9499). There’s no tantalizing, no teasing, no Apple-esque experience. It’s all, “Here’s your book. Here’s your remote. Here’s your power cord. Here’s some expanded polystyrene.” 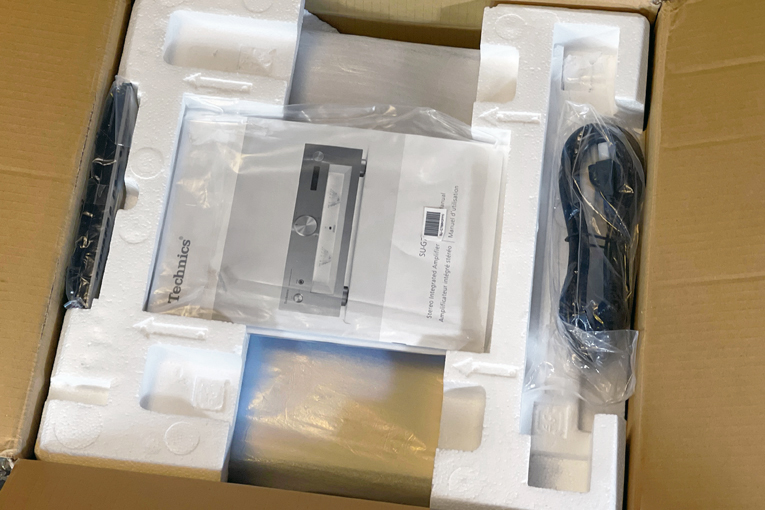 Thankfully, the EPS is molded in four pieces (technically five since one of the top pieces broke), making it easy to get the amp out of the packaging without a lot of awkward fiddling. At 28 pounds, the SU-G700M2 isn’t the heaviest integrated amp I’ve reviewed here lately, but it’s still too much of a chonk for me to want to fiddle with those ridiculous end-cap EPS supports that you have to pull out with the product itself. 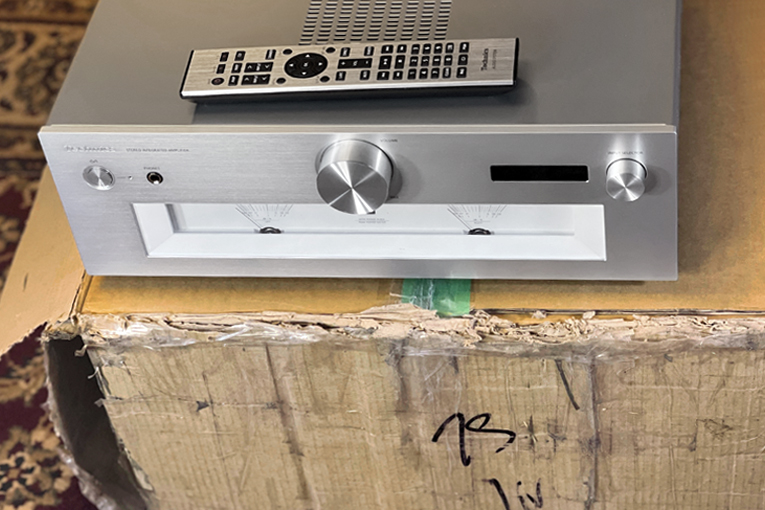 With the amp out of the box completely, we get our first good look at its faceplate design, which is a study in simplicity and retro swagger, just like its predecessor, the SU-G700, and its big brother, the SU-R1000. There’s a power button, a headphone jack, a volume knob, and a rotary input selector, and that’s it aside from those big, beautiful stereo VU meters. 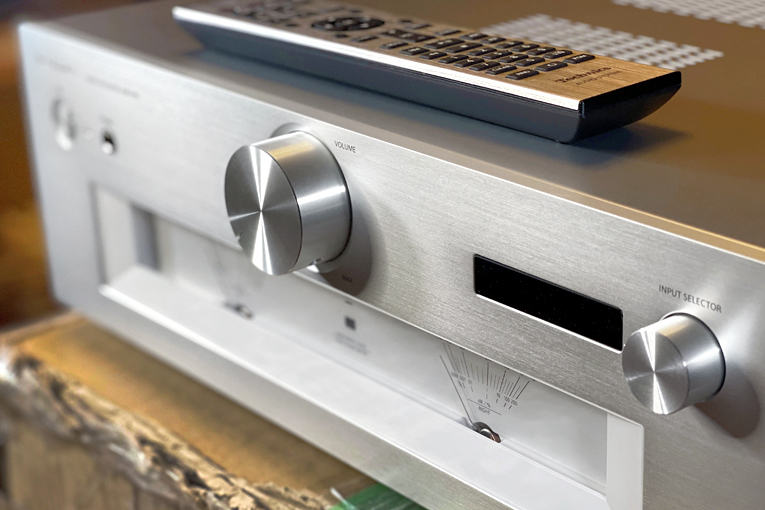 A closer look reveals the brushed pattern of the faceplate, which results in these neat little diffuse reflections and light flares that I really dig. It remains to be seen how much those show up in my two-channel listening space, which is darker than your average old-school photo-development room.

From this angle, you can also see something that isn’t wholly apparent from a head-on view: the inset beveling of the VU-meter window. I’m a sucker for little touches like that. So far, the only thing I’m not loving about the SU-G700M2 is the tactile feel of its volume knob. It’s simultaneously hollow feeling and stiff, which is an odd combination. But given everything else about the design of the amp, it’s hard to complain. 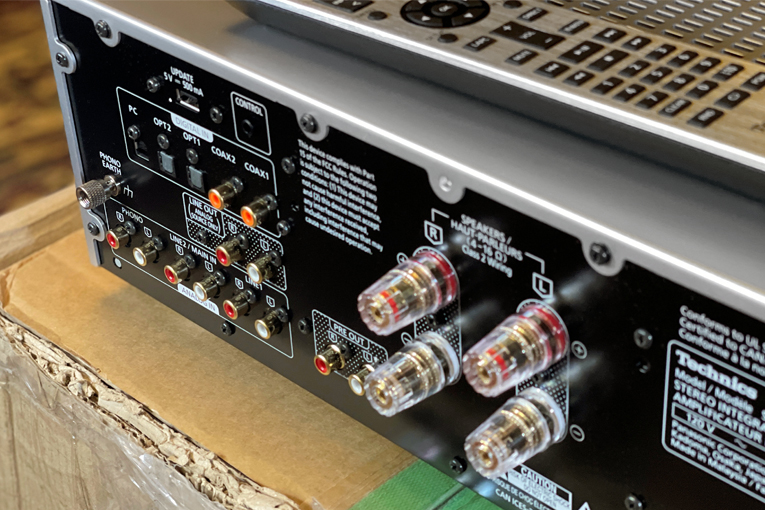 Flipping the unit around, you can see that it’s as well-equipped in terms of I/O as its forebear, with plenty of digital and analog inputs. One thing you can’t tell from here is that the phono input supports both MM and MC cartridges (the original SU-G700 supported only MM).

There are a few other new upgrades, as well as some really cool under-the-hood tech that makes the SU-G700M2 much more than a pretty face (and, uh, rear end, I guess?). But we’ll save all that for the full review. For now, I’m just itching to hook this beauty up, fire it up, and watch those edge-lit VU meters dance to the music.