Having written primarily about home theater for the last decade or so before joining the SoundStage! family, I’m still adapting to just how different the two-channel world is in many respects. Take Sound United’s output, for example. Tell a typical home-theater enthusiast that Denon just dropped a new integrated amp, and the first question a cynical AVR guy will ask is, “What’s the Marantz equivalent, and how do the two products pretend to be different?” In the two-channel domain, though, the Sound United sister brands have done a really good job of differentiating themselves in everything from form factor and ergonomics to circuitry and presentation.

Take the company’s new PMA-1700NE integrated amp ($2099, all prices USD), for example. You merely need to glance at the outer carton to recognize that Denon seems to be aiming for an entirely different customer for this piece than the one who might be shopping for, say, the recently reviewed Marantz Model 40n ($2499), its closest competitive sibling. 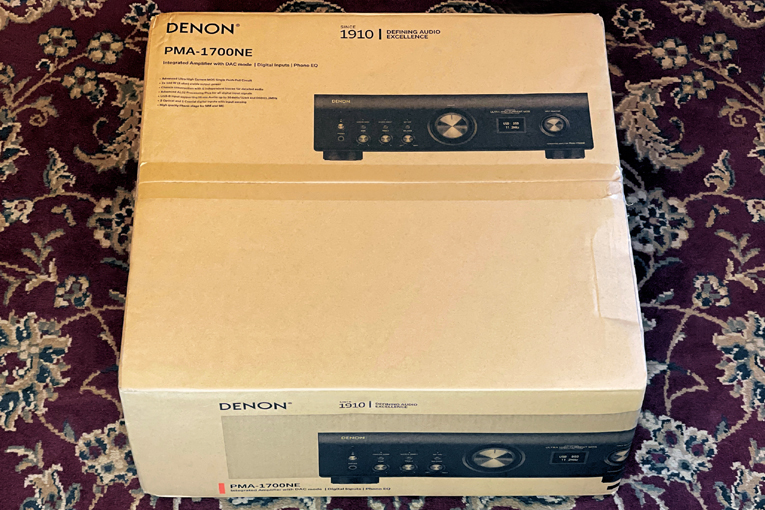 The Denon doesn’t tease or tantalize with its packaging. It says, “I’m a black box that makes music,” and makes no apologies for it. It gets straight to the point: “Integrated Amplifier with DAC mode. Digital Inputs. Phono EQ.” I almost feel like there’s a silent “What more do you need?” on the end there. 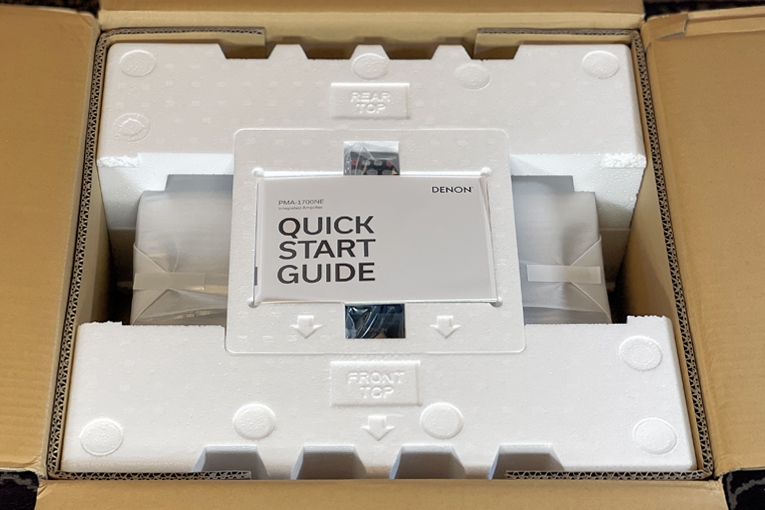 Pop the top and the no-nonsense approach to presentation continues. Mind you, “no-nonsense” shouldn’t be read as “cheap” or “unrefined.” It’s simply that the PMA-1700NE assumes you’re here for a well-built piece of gear and a high-fidelity audio experience, not bronze-foiled lettering or swanky inner packaging. Here are your instructions, here’s your remote, and here’s the direction things should face if you ever need to box it all up again. 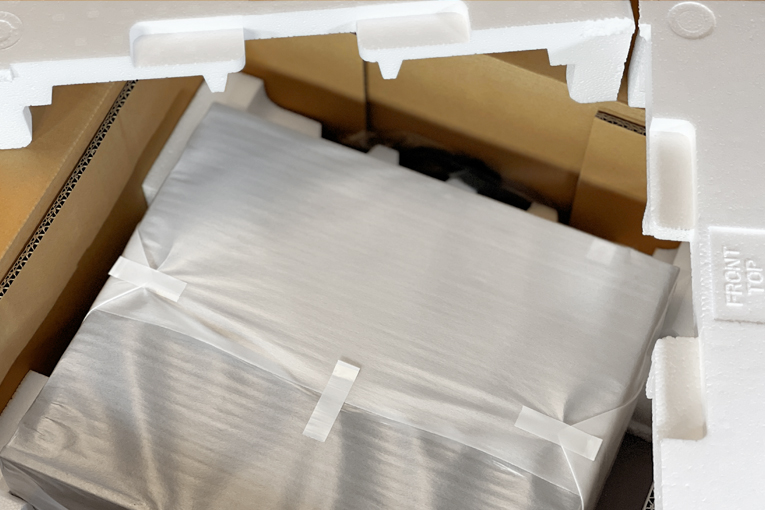 None of this should be read as anything resembling a value judgment, by the way. One approach isn’t inherently better than the other. I quite like the whole to-do surrounding the unboxing of Marantz stereo gear these days. But there’s also something deeply resonant about the more proletariat approach of the Denon.

In every meaningful way, the packaging materials surrounding the PMA-1700NE are the same as those surrounding the Model 40n—four pieces of sculpted, expanded polystyrene that can easily be pulled out without disturbing the amp, with the chassis itself wrapped in thick air-foam paper—but look at the way the paper is folded and secured. It’s not all origami-like. There are no swanky circular stickers. The packaging is there to do its job, and it does it proudly, but without pomp or circumstance. Nary a corner is cut, but neither is it gussied up. Again—nothing wrong with either approach. I just find it interesting—and heartening—that Denon and Marantz are differentiating themselves in these little ways. 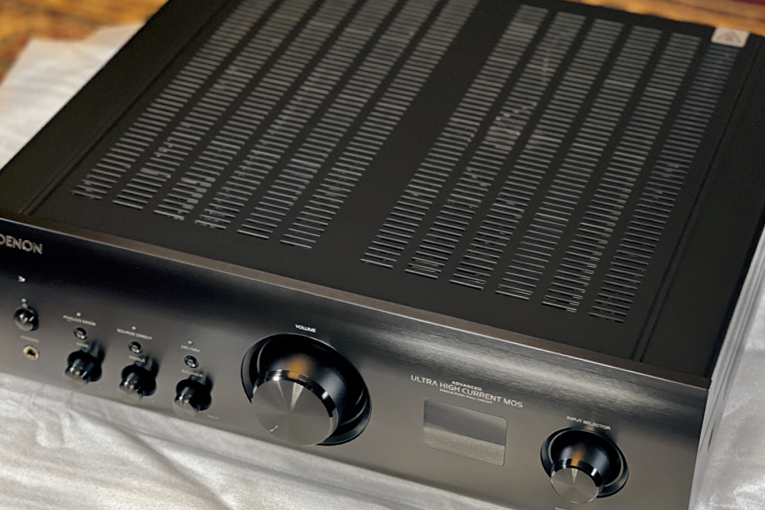 With all 38.8 pounds (17.6kg) worth of amp pulled out of the box and unwrapped, it’s hard not to appreciate the simplicity of the PMA-1700NE’s aesthetic, which follows the aesthetic of the last few years’ worth of Denon stereo design. In fact, other than the lack of fancy script on the text, you’d be hard-pressed to tell it from its forebear, the PMA-1600NE, at first glance. 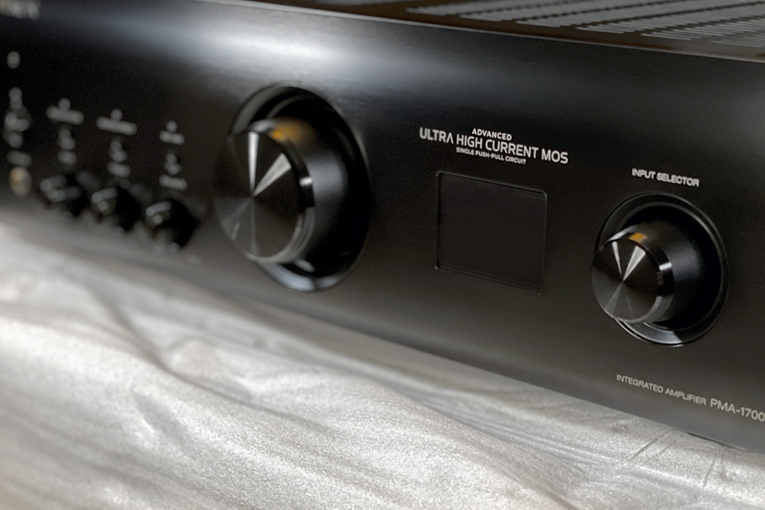 Mind you, I’ve never had any hands-on time with the 1600NE or any of the newer Denon integrated amps in this family (my most recently acquired Denon two-channel kit was the wonderful little PMA-150H, which I still rock out to when I’m living with a 2.1 system instead of three-way towers), so there were a few ergonomic surprises for me.

The volume knob is one, for sure. Y’all know my fetish for a good volume control, and this one follows my platonic ideal for what a good, chonky, twist-right-make-play-loud knob ought to be. This disc-shaped slab of aluminum feels like it weighs 5000 pounds (±4999.5), but it rotates freely and smoothly with precisely the right amount of inertia. I’m utterly smitten, and I haven’t even plugged this thing into power yet. 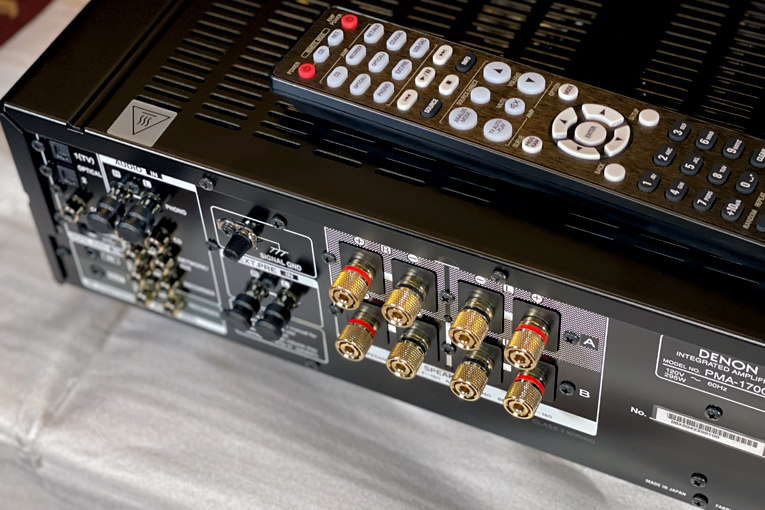 Flipping the unit around, you can see that it’s well-equipped in terms of I/O, but it follows the same trend as everything discussed above. Rather than the Marantz SPKT-1+ five-way binding posts we saw on the Model 40n, the PMA-1700NE sports more typical gold-plated five-way binding posts with furled nuts. Again, functionally it almost certainly makes no difference, but aesthetically and ergonomically, it makes the units feel like they’re each targeting a different potential buyer. 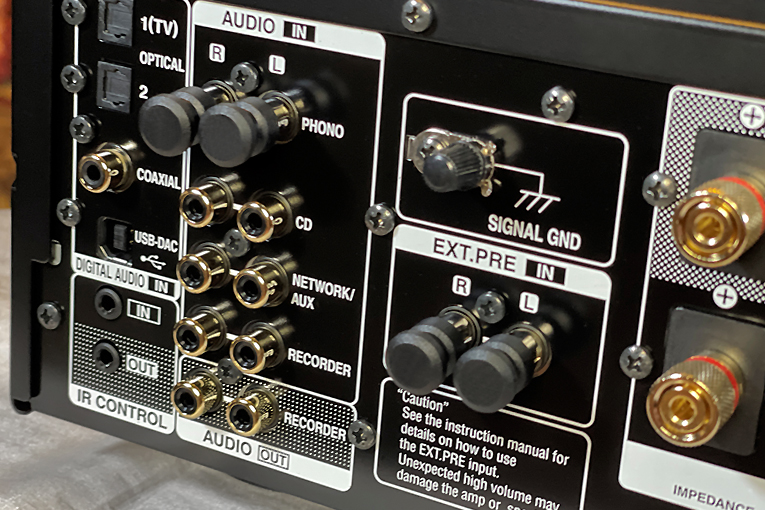 Zoom in a little closer on the inputs and outputs, and you can see that the PMA-1700NE is remarkably similar to the 1600NE in terms of connectivity as well, with two optical digital ins, a coaxial digital in, a USB-DAC port, and plenty of analog connectivity for most people’s needs. You might note the lack of an MM/MC switch for the phono stage—that’s been moved to the front panel.

There is one pretty substantial difference between the PMA-1700NE and 1600NE, though: the addition of an input labeled “EXT. PRE” on the new unit. This is effectively an HT bypass, something that Denon hasn’t included at this level in quite a while, to the best of my memory.

The real question, of course is—despite how different they look—once we recognize how closely the Denon’s power output specifications match that of the Marantz Model 40n, given how close they are in price (once you factor in the Marantz Tax but also account for the fact that the Model 40n has more connectivity and built-in HEOS), and given that they’re from the same parent company, how do the two amps compare in terms of performance?

That’s the question I’ll be most interested in answering in the course of my full review, coming soon to the pages of SoundStage! Access.