Son of a Thingee 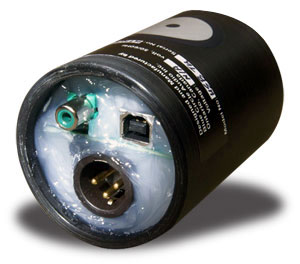 Blue Circle Audio’s Gilbert Yeung is the audio equivalent of James Bond’s Q. Like the Secret Service’s technician-in-chief, Yeung is quirky, somewhat reclusive, and an entirely unconventional technical genius. Q turned watches into lasers and pens into high explosives. Yeung turns women’s shoes into amplifiers and sections of plumber’s pipe into preamplifiers and digital-to-analog converters. And he’s good at it, too. Blue Circle’s first try at a USB DAC, the USB Thingee, was named GoodSound!’s Product of the Year for 2008. Two years later, Yeung has brought us a higher-resolution USB digital converter in a pipe, the USB Tunnel 24/96 ($399 USD).

Yeung makes it very clear that the USB Tunnel is not a USB Thingee. While they look alike, inside each model’s humble length of ABS pipe are differences as great as those separating cats from dogs. The USB Tunnel 24/96 is a hi-rez device capable of passing 24-bit/96kHz audio signals from a USB input to RCA (S/PDIF) and XLR (AES/EBU) digital outputs. The Thingee was strictly a 16-bit/44.1kHz machine, though it offered internal D/A conversion and analog output, something the Tunnel eschews.

While the products are different in many technical aspects, their overall design philosophies are similar. Blue Circle found that isolating the USB converter from the noise generated by a computer’s dirty power supply (as transmitted through the 5V available from its USB ports) is critical to getting the best computer sound. So, like the Thingee, the USB Tunnel 24/96 features both galvanic electrical isolation to keep the noise out, and a built-in power filter that lets the Tunnel use those 5V for its power supply without affecting the sound.

What other factors separate the USB Tunnel from the USB Thingee are anyone’s guess -- per Blue Circle’s standard operating procedure, the company isn’t saying what parts are used inside the Tunnel. This stance comes directly from Gilbert Yeung’s belief that consumers can be fooled into making poor audio decisions by comparing spec sheets rather than listening to the products themselves. The USB Tunnel is about 0.25" shorter than the USB Thingee, but is housed in the same 2.5"-diameter ABS pipe. It’s the size of a hand grenade.

I used the USB Tunnel 24/96 with both a PC running Windows 7 and a current-generation Apple iMac. My PC is cursed; it seems to be the only one in the wide world of audio incapable of outputting audio at resolutions of 24/96 or higher. Why this is so remains a mystery, but I solved it easily enough by buying the iMac. Both computer systems immediately recognized the USB Tunnel as a "Blue Circle Audio USB" device. For Windows, my playback software was Foobar2000; with the iMac I used iTunes paired with Fluke, which let me play my many FLAC-format audio rips, all converted and listened to in uncompressed WAV format.

The Tunnel 24/96 was connected to both computers with Synergistic Research’s Tesla Tricon USB cable. As the USB Tunnel outputs only a digital audio signal, I connected its S/PDIF output to a Simaudio Moon 300D DAC with a Furutech FX-a-G digital cable. Analysis Plus Micro Oval interconnects connected the 300D to my Simaudio Moon i5.3 integrated amp, which in turn drove my Definitive Technology Mythos ST speakers via Synergistic’s Galileo Universal Speaker Cells. 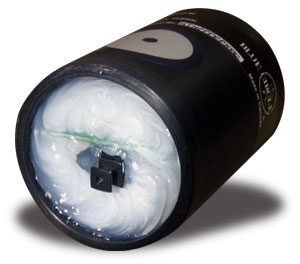 The first challenge presented by the USB Tunnel was to distinguish its sound from that of the Simaudio 300D’s own USB input, which is limited to 16/48 resolution -- the main reason to use a USB Tunnel to begin with. This wasn’t easy to do, though ultimately I did note some distinctive characteristics. Still, these weren’t necessarily ascribable to the USB Tunnel, but to the fact that I could use higher resolutions via the iMac than with the 300D alone.

The USB Tunnel did its level best to "disappear." In my review of the USB Thingee, I noted that product’s ability to provide a "black" sonic background from which subtle details, spatial cues, and other goodies could leap like excited gazelles. This held true for the USB Tunnel 24/96, but to an even greater degree. Listening to the same test tracks I used for the USB Thingee, and comparing the USB Tunnel with its predecessor back to back, it was clear that while both devices have the same parents, the newborn has inherited the better set of audio genes. I could simply hear more microdetail through the USB Tunnel.

Of the USB Thingee’s performance, I said that the ambiance of the recording venue of Jazz at the Pawnshop (CD, Proprius 7778) "blended beautifully with the music, resulting in an all-enveloping live musical experience." Even though it’s a 16/44.1 recording, this was even more the case with the USB Tunnel. A great two-channel recording, whether analog or hi-rez digital, can be as spatially realistic as a multichannel recording, a fact that the USB Tunnel 24/96 illustrated with aplomb. During a late-night listening session, when the sonic interferences of the outside world had gone silent, I found myself darn near looking for the surround speakers that I knew weren’t there.

Of course, the USB Tunnel is really all about getting the most from 24/96 recordings with DACs that aren’t capable of accepting such resolutions from their USB inputs, or that don’t have USB inputs at all. I fed the Simaudio 300D a steady stream of 24/96 recordings from the USB Tunnel, all of them extraordinary things to hear. Marta Gomez’s hauntingly beautiful "Lucia" (24/96 FLAC, Chesky/HDtracks download sampler) is a superb example of what higher resolution can achieve. Gomez sounds to me like a more energetic and plaintive Astrud Gilberto, and the interplay between the singer’s sad tone, the melancholy of the accordion, and the hopefulness of the acoustic guitar makes for addictive listening. So, too, did the way it all was portrayed by the USB Tunnel. The Tunnel’s black background mattered a ton here -- it allowed each instrument to stand firmly on its own, neither dominated by nor overwhelming any other instrument. Detail was fantastic, from the rubbing of fingers on guitar strings to the difference between a palm smack and a finger tap on the bongos. When I listened carefully, I could even hear the accordion filling its bellows with air.

I also got a lot of enjoyment out of The Snow Maiden: Dance of the Tumblers, from the same HDtracks sampler, with its powerful combination of brass and timpani sections inducing me to do some vigorous air conducting. Quieter passages featuring the strings and tambourine again shone brightly, thanks to the ultraquiet background. The dynamic abilities of the USB Tunnel were also highlighted by the crescendo at the end of the piece, in which the energetic dichotomy between the timpani and triangle could not have been greater, but where the crushing thunder of the low notes was allowed to reach its full fury while doing nothing to impeach the humble treble of the triangle.

The most direct comparison I could make between the USB Tunnel 24/96 and a competitor was to contrast it with the 16/48-limited USB input of the Simaudio Moon 300D. While the latter is not available as a separate component, neither can the USB Tunnel operate without a downstream DAC, so the exercise seemed reasonable.

As mentioned, there wasn’t much to distinguish the USB Tunnel from the 300D’s inherent computer-audio capability with CD-resolution tracks. While the 300D technically out-specs the USB Tunnel with its non-USB inputs, capable as it is of resolutions up to 24/192, it couldn’t compete with the USB Tunnel through its USB inputs. With 16/44.1 media, I believe the differences I heard came down not to a superiority in either component, but rather the fact that the USB Tunnel 24/96 was connected to the 300D by a somewhat dark-sounding Furutech digital cable. I base this conclusion on a simple observation: Other than a slight mellowness and softening of upper-treble output, the two converters were hard to tell apart. With the right digital cable in place, I might have really had to split hairs to distinguish the 300D from the Tunnel 24/96. With hi-rez tracks, the Tunnel 24/96 allowed me to use the 300D to its best ability: through its S/PDIF input. This method was clearly superior to going directly through the 300D’s USB input.

A comparison based on price doesn’t work here: The $399 USB Tunnel needs a DAC to work with, and the USB input of the Simaudio Moon 300D ($1599) isn’t available separately. A better comparison would be between the 300D and Blue Circle’s BC509 DAC, which can be internally fitted with the Tunnel 24/96 (and costs $1490 when so equipped). That was beyond the scope of this review, but having heard both of the latter, it’s clear to me that Blue Circle knows as much about computer audio as its bigger competitor.

Back in the bad old days of hard media, gaining access to high-resolution audio meant buying all-new hardware that played such formats as DVD-Audio and SACD. Computer audio has changed all that, and Blue Circle has perhaps done more than any other audio manufacturer to make this superior means of audio reproduction available to almost any budget. The USB Tunnel 24/96 offers a fantastic way to get computer-audio signals into an existing DAC; it will almost certainly inspire many audiophiles to relegate their CD players to the dustbin of digital history.