In the past, Audio-Technica has made some good low-end turntables, as well as some toward the upper end of entry level—such as the AT-LP7, which I reviewed in March 2020. Some recent additions nicely fill in the gaps in the line: the AT-LPW30TK ($249 USD) and the subject of this review, the AT-LPW40WN ($299). They differ from each other mainly in that the ’40 has a motor with a speed-stabilization circuit, a carbon-fiber tonearm (the ’30’s arm is aluminum), and a better cartridge—Audio-Technica’s AT-VM95E, with elliptical stylus (the ’30 has A-T’s VM95C, with conical stylus). There are cosmetic differences as well: the ’40’s plinth is covered in walnut veneer, and its tonearm and 33⅓/Stop/45 control are black; the ’30 is finished in teak veneer, with silver arm and knob. 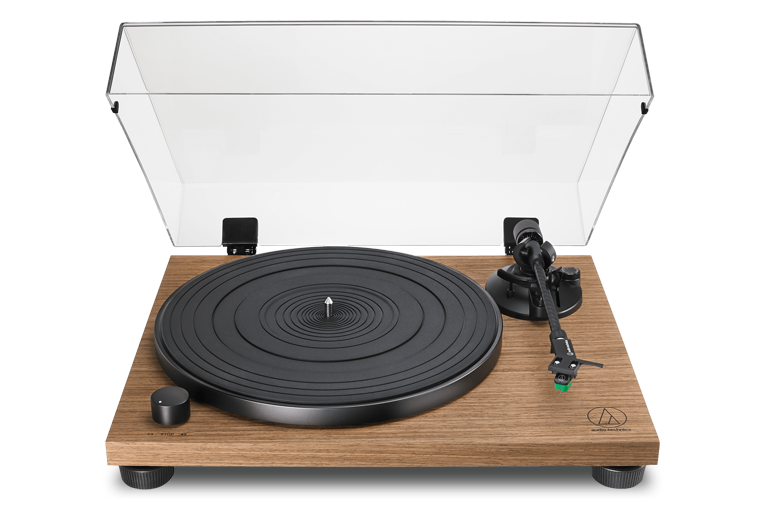 The top deck of the manually operated, belt-drive AT-LPW40WN is very simple: the 33⅓/Stop/45 knob, the platter, the tonearm, and the cueing lever. On the center of the rear panel are the other important items: from left to right, a ground/earth post, the output jacks (RCA) for the phono cable, a Phono/Line switch for selecting between direct output and the turntable’s built-in phono stage, an input jack for the power supply, and the main Power switch.

A turntable as simple in operation as this should be easy to set up, and the AT-LPW40WN indeed was. Audio-Technica does a fine job of packaging the various parts so that everything is clearly presented: the plinth, with motor and tonearm; the light platter of cast aluminum and its rubber record mat; the tonearm counterweight; the headshell with preinstalled cartridge; the dustcover and its hinges; the 12V wall-wart power supply with 1.5m cord; the 1m phono cable, of a quality commensurate with this model’s low price; and a 45rpm adapter.

Hardest to do was install the hinges for the sturdy dustcover. They’re made of strong plastic, and I had to use a wide-blade screwdriver to pry them far enough apart to accept the dustcover itself. Otherwise, I had the AT-LPW40WN set up and ready to go in about 15 minutes, including leveling it on my stand. A-T’s textless quick-start guide resembles the instructions for assembling a piece of IKEA furniture, and I found it not exactly helpful. However, the full user’s manual, available for download from A-T’s website, is just the opposite: anyone new to or getting reacquainted with vinyl should find it helpful and complete.

Audio-Technica’s specifications for the AT-LPW40WN are comparable to those of many other turntables in the price range. Wow (slow variation in platter speed) and flutter (fast variation) are <0.15% at 33⅓rpm at 3kHz, and the signal/noise ratio is >60dB. The built-in phono stage, for those whose preamp, integrated amp, or receiver lacks such a thing, boosts the cartridge’s 4.0mV output to a line level of 200mV. The tonearm has an effective length of 8.8ʺ and is straight, with a canted headshell. Unlike the carbon-fiber arm of the AT-LP7 reviewed last March, the ’40’s arm doesn’t bounce around quite so readily—it’s also somewhat better damped, which is good news. The headshell is detachable, to simplify the swapping in and out of cartridges. 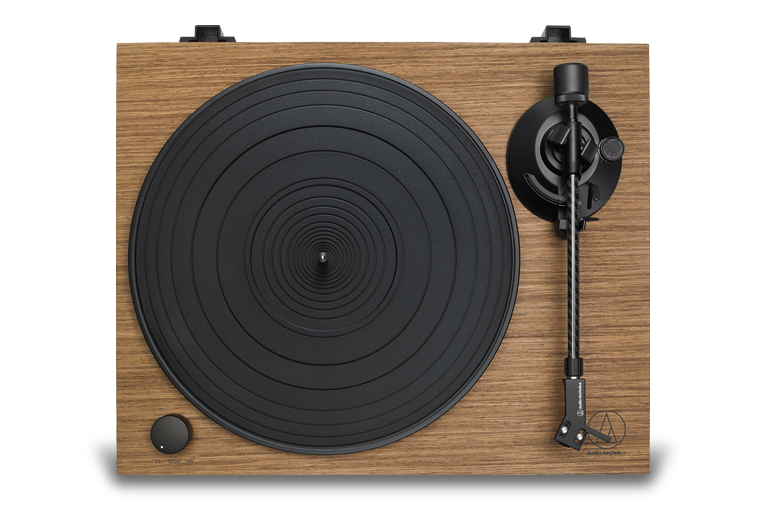 The AT-VM95E cartridge, from A-T’s entry-level line, retails for $49 if bought separately. It’s their lowest-priced model with an elliptical stylus, in this case a diamond measuring 0.3 x 0.7 mil bonded to a tubular cantilever of aluminum. The recommended range of vertical tracking force (VTF) is 1.8-2.2gm.

Sometimes, with belt-drive turntables, there’s a faint whisper from the belt itself—but the AT-LPW40WN was dead silent. For nearly all of my listening, the AT-LPW40WN was plugged into my Simaudio Moon LP110 v2 phono stage. I did try the ’40’s built-in stage, and found it adequate for most purposes. It wasn’t as quiet or as detailed as the LP110, but unless you’re particularly fussy about a wisp of noise and/or you otherwise lack a phono stage, you won’t need to look for an outboard stage.

Mussorgsky’s Pictures at an Exhibition is most often heard in the orchestration by Ravel, but I’ve always been enthralled by the composer’s original version, for solo piano—so I began with the recording by pianist Lazar Berman (LP, Deutsche Grammophon 2531 096). The buttoned-down sound of this closely miked 1979 recording lacks much of the dynamic grandeur for which Berman was known, but provides a fair amount of detail from the piano. The bass notes were subdued, but that was the fault of the recording, not the turntable. The AT-LPW40WN let me hear the wonderful tonality of Berman’s piano and offered more than a hint of his powerful playing. And the more delicate sections of this performance were just that—and beautiful.

After writing “Music for Reviewing Turntables,” published December 2020 on SoundStage! Access, in which I laid out the reference recordings I most often use, I decided to mix it up a bit: many of the same artists, but different cuts; or some artists out of left field. 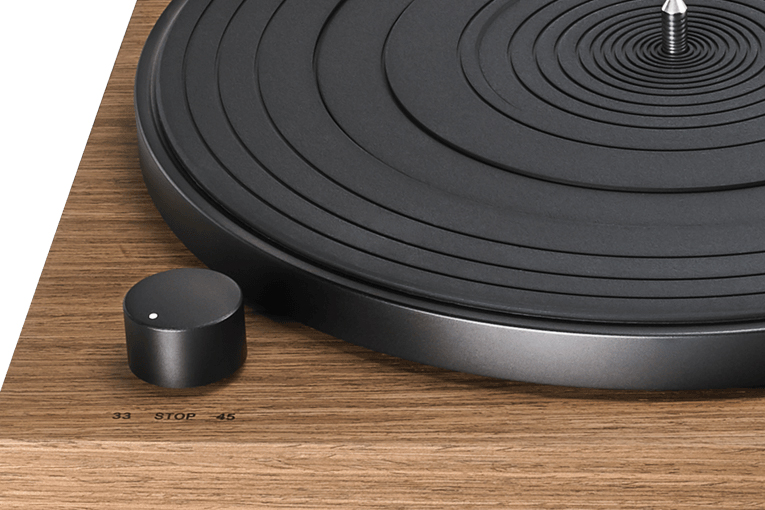 First up was a longtime standby, Miles Davis’s Kind of Blue, from 1959 (2 45rpm LPs, Columbia/Legacy/Mobile Fidelity Sound Lab MFSL 2-45011). While I usually play “So What,” this time it was “All Blues”—the same players, and a masterful group of soloists it is: Davis on trumpet, Cannonball Adderley on alto sax, John Coltrane on tenor sax, Bill Evans on piano. Davis’s trumpet sounds mellow even in his solo, when he’s not using a mute. Adderley also comes across as very mellow, nearly duplicating the sound of another alto master, Paul Desmond. And Coltrane is a bit less all over the place than usual, his improvisations on the theme more easily followed and understood. The sound of the recording is incredible, and let me assess just how quiet the A-T was. I heard no surface noise from the A-T cartridge, which was a very impressive result.

“Uptown Girl,” from Billy Joel’s Greatest Hits: Volume I & Volume II (2 LPs, Columbia/Mobile Fidelity Sound Lab MFSL 3-418), is Joel’s paean to Frankie Valli and the Four Seasons. I love Liberty DeVitto’s drumming throughout—he’s kind of an East Coast Hal Blaine (drummer for the West Coast’s Wrecking Crew), with lots of power. The visceral nature of his playing came right through via the AT-LPW40WN, the power of that playing genuinely conveyed by my speakers. In this track, the harmonizing voices swirl around Joel’s voice, creating an interesting effect and an impression of a deep soundstage. Through the AT-LPW40WN that depth was good but not outstanding, though I did get a sense of where voices and instruments are placed. This compilation was remastered and pressed on 180gm virgin vinyl for release by MoFi—the record surfaces are very quiet—and again, I heard no surface noise through the AT-LPW40WN.

I next went with an old standby, Paul Simon, but this time not his “50 Ways to Leave Your Lover.” Instead I played “You Can Call Me Al,” from Graceland (LP, Warner Bros. 9025447-1). Right off the bat, the slap bass hit me upside the head in a good way. After that, nearly everything else is secondary. Simon’s voice was firmly centered as the backing voices surrounded him—this cut, too, had excellent depth. The trumpet blasts weren’t right up front, but they projected power and were tonally spot on—no slop whatsoever. This is a great recording, and through the AT-LPW40WN it sounded like it.

One reference track I occasionally use but didn’t mention in my article is “Love Alive,” from Heart’s Little Queen (LP, Portrait 3 34799). It begins with two exquisitely played acoustic guitars that sound fabulous. Through the AT-LPW40WN Ann Wilson’s voice was front and center, then the electric instruments enter strong, and then a closely miked acoustic 12-string guitar that the A-T clearly differentiated. This song, too, boasts powerful drumming—the kick drum and tom-toms sounded as if they could damage my woofers if I set the volume too high. This song has been on my radar since I first heard it on the radio in 1977, the year of Little Queen’s release. Blown away, I went out that evening after work and bought the album. “Love Alive” never made the Top 40, but to me it’s the best track on the album. The AT-LPW40WN did it proud. 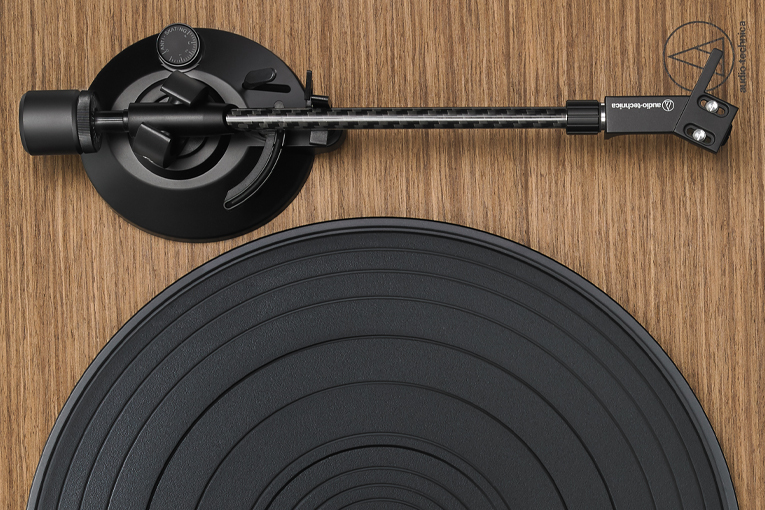 One of my all-time favorite groups is Manhattan Transfer, and their version of “Four Brothers,” from Live, is one of my all-time favorite recordings of theirs (LP, Atlantic/Mobile Fidelity Sound Lab UMOB 1-022). Jimmy Giuffre wrote the tune in 1947, for the four sax players of Woody Herman’s Herd, and this vocalese version, with lyrics by Jon Hendricks, is superfast, supersharp, and superhard to sing—as I listen, I try to make out each word as it’s sung. The AT-LPW40WN easily passed that test, and the imaging on the deep soundstage was quite good: solo singer well out front and centered, backing singers somewhat behind and to either side, instruments well to the rear. And Michael Schnoebelen’s walking e-bass line was easily audible and a delight to hear.

Finally, I turned to “Take Five,” from the Dave Brubeck Quartet’s Time Out (LP, Columbia PC 8192). This is such a distinctive recording that it begs to be used in any audition of audio gear. Paul Desmond’s alto sax sounded just as smooth through the AT-LPW40WN as I’d hoped it would, while Joe Morello’s drums, especially his cymbals and snares, had a bit of top-end sparkle. Also, while all the instruments save the sax were clustered in the right channel, Morello’s single tom-tom and snare kind of sneaked into the center of the soundstage during his solo. I hadn’t noticed that before. Kudos to the AT-LPW40WN.

I compared the Audio-Technica AT-LPW40WN with my longtime reference record player: a vintage Dual CS5000 turntable and tonearm with Sumiko Oyster Moonstone cartridge. (I reviewed the Moonstone in November 2018.) In at least one respect, the comparison was unfair—the AT-LPW40WN package retails for the price of my Sumiko alone. But I wanted to hear just how much of a bargain this bargain-priced turntable might actually be.

I played “Lucretia MacEvil” and “Lucretia’s Reprise,” both from Blood, Sweat & Tears’ 3 (LP, Columbia KC 30090). The playing on these tracks, especially by trumpeter Lew Soloff and bassist Jim Fielder, is incredibly tight. It’s always interesting to hear how a turntable reproduces these sounds.

I began with the Dual. Overall, the sound was very tight, each staccato note discrete. I marveled at Soloff’s precision and how fast he ripped off notes. The bass line in “Lucretia’s Reprise” is another example of talent and dexterity, worthy of the bass master James Jamerson, of Motown. The ersatz soundstage was well defined and stable. I was again very pleased with the Dual’s sound. 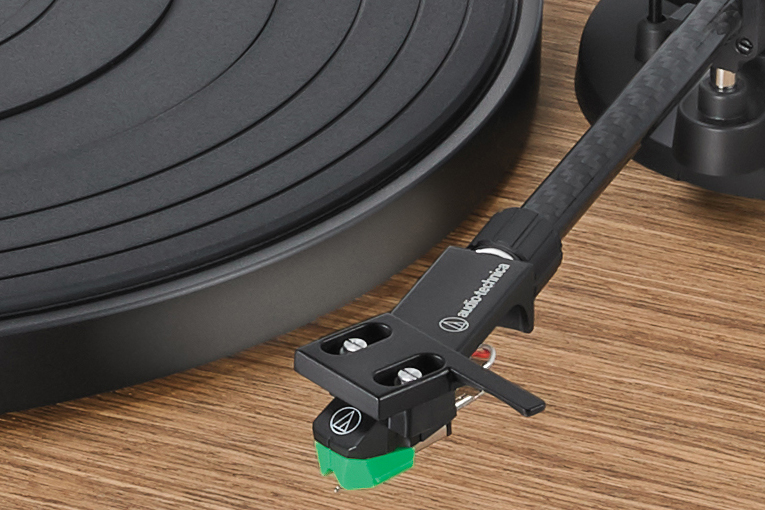 Time for the AT-LPW40WN. Immediately, I noticed that there wasn’t as much high-frequency extension as from the Dual. The sound was a bit mellower, but still kicked out the dynamics. Staccato notes weren’t quite as well defined but were still very listenable. Fielder’s bass line, however, was nearly as good as through the Dual, and Soloff’s trumpet, though not quite as tight and precise, was very close.

I enjoyed my time with Audio-Technica’s AT-LPW40WN. It’s well made and attractive, with a high-quality tonearm, a stable motor platform, good isolation from resonances, and a more-than-decent cartridge. There are any number of $300 turntables on the market right now, but few are made by companies as experienced in making record players as Audio-Technica.

The AT-LPW40WN is a quality player at a great price. I recommend it to anyone who wants a turntable that won’t break the bank going in. It’s worth serious consideration. But hey, A-T: suppose you could come up with a model name that rolls more easily off the tongue?