The UK company Audiolab has been around since the early 1980s. Some readers may know or remember them as TAG McLaren Audio -- the ownership and branding changed in 1997, but in 2003 TAG McLaren ceased production, and in 2004 Audiolab, once again under its original name, became part of the International Audio Group.

I didn’t become familiar with an Audiolab product until last summer, when I thoroughly enjoyed and reviewed the 6000A integrated amplifier-DAC ($999.99 USD). With it, I’d also received a review sample of the 6000CDT CD transport -- visually and functionally a perfect mate for the 6000A. Now it’s the turn of the 6000CDT ($549.99) -- a no-frills, straight-up CD transport without DAC. It does just one thing: read “Red Book” CDs.

At 17.5”W x 2.6”H x 11.8”D and 11.9 pounds, the 6000CDT is relatively light and compact. It’s housed in a brushed-aluminum case available in one of two finishes: all black or all silver (my sample was the latter). The fit and finish belie the 6000CDT’s modest price -- it felt sturdy and looked great, with rounded edges and flush-mounted, color-matched machine screws. The only disappointment is the warranty: just one year. 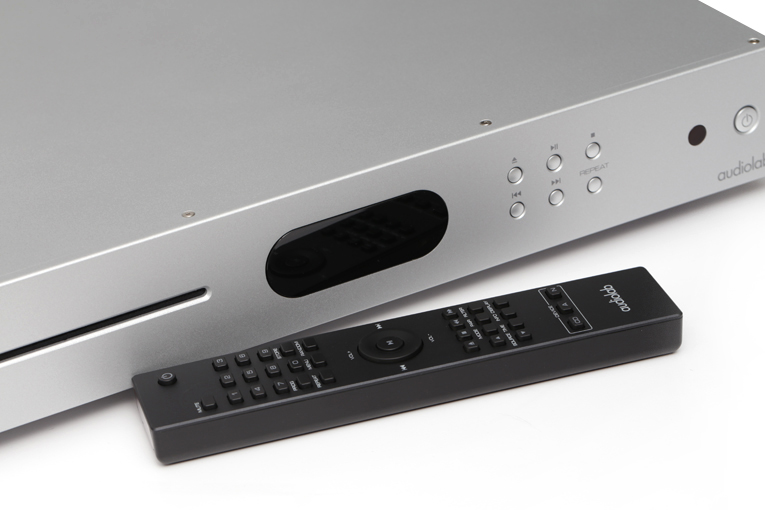 The 6000CDT’s front panel is clean and minimalist. Front and center is an OLED display that displays the track number and elapsed time, and flashes when play is paused. When no disc is loaded, the screen states that. The 6000CDT is a trayless transport -- to the left of the display is a narrow slot into which you slide the disc. Perhaps it’s just the novelty, but I find trayless transports sexier than the usual disc drawers sliding in and out. At far left is a small red power-indicator LED. At far right is the on/standby/off button; to its left is the remote sensor, and to left of that are two rows of three pushbuttons each: above are Eject, Play/Pause, and Stop, and below are Previous Track/Fast Reverse, Next Track/Fast Forward, and Repeat.

The rear panel is even sparser. At far left are a fuse bay, a three-pronged IEC power inlet, and the main Power toggle; at far right are optical S/PDIF (TosLink) and S/PDIF (coaxial) outputs, and two input/output triggers. The 6000CDT is a CD transport only, so Audiolab provides few specs: The coaxial output’s digital output voltage is at 600 ±50mVpp (i.e., a typical digital squarewave), and the output impedance is 75 ohms, ±1 ohm. The maximum sampling rate is 44.1kHz for both outputs, the “Red Book” CD standard, and the frequency response is 20Hz-20kHz, ±0.01dB -- essentially, the 6000CDT is perfectly linear throughout the audioband, as you’d expect nowadays. 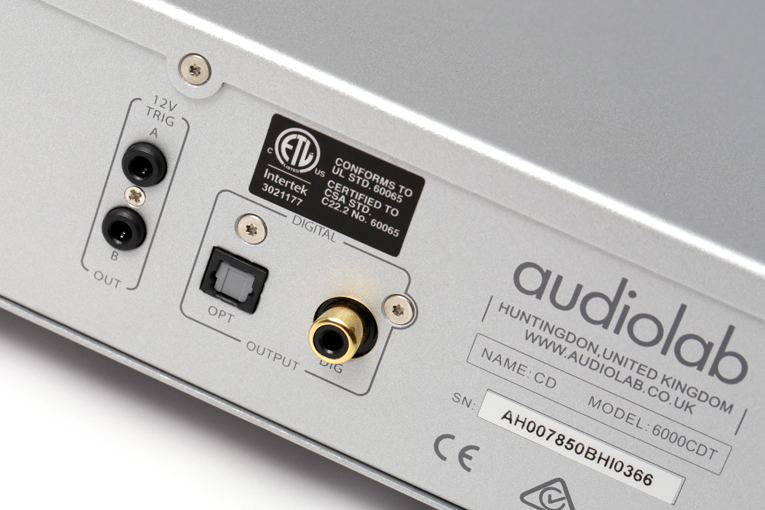 My listening space is a dedicated, sound-isolated, windowless basement room measuring 15’L x 12’W x 8’H, with a concrete-slab floor carpeted wall to wall. There are broadband absorption panels at the first reflection points on the sidewalls and on the front wall between the speakers. There are also bass traps in the front corners, and some diffusion on the wall behind my high-backed recliner.

Although I also used the Audiolab 6000CDT with its sibling 6000A integrated-DAC, for this review I restricted my critical listening to my reference system: A McIntosh Laboratory C47 preamplifier-DAC feeding a passive, line-level, balanced Marchand Electronics XM446XLR-A high-pass filter (HPF) set to 24dB/octave. The Marchand in turn feeds my McIntosh MC302 power amp. A miniDSP DDRC-22D room-correction processor with Dirac Live comes between my digital sources (Bluesound Node streamer, Rotel RCD-991 CD player) and the C47’s DAC. 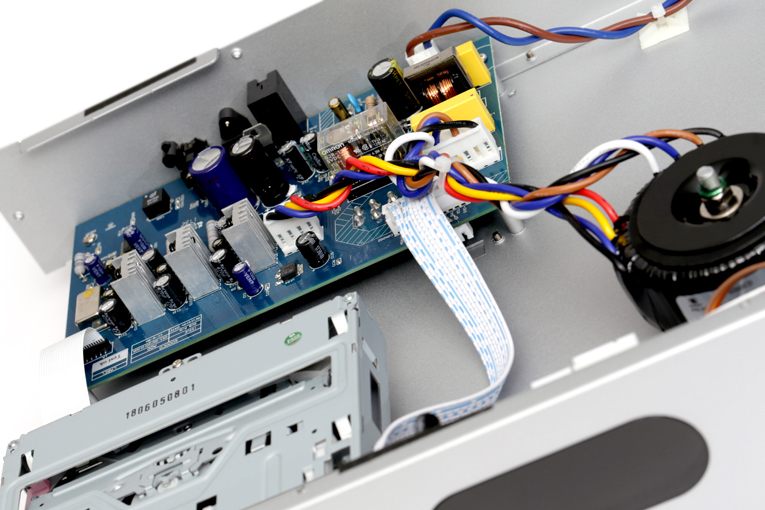 My Bowers &Wilkins 705 S2 speakers are crossed over at 120Hz to two SVS SB-4000 subwoofers, their low-pass filters set to 130Hz (24dB/octave). The B&Ws are set up on stands against one long wall and toed in 18°; they and my listening seat describe a 9’ equilateral triangle. My SVS subs are connected to the McIntosh C47 preamp via balanced (XLR) interconnects, their balanced outputs feeding the Marchand HPF.

The target frequency-response curve I use with Dirac Live is inspired by Harman International’s research (see this). I typically use a Windows 10 laptop running Roon as a source, the Bluesound Node streamer acting as a Roon endpoint and connected to the miniDSP DDRC-22D via a TosLink interconnect. I connected the 6000CDT’s coaxial digital output to the coax digital input of the miniDSP, and thus was able to compare its sound while playing CDs with FLAC rips from the same discs played from my NAS through the Roon-Bluesound combo.

First, here’s what I didn’t hear from the Audiolab 6000CDT. This machine was whisper-quiet while spinning discs. Even with my ear against the disc slot, I heard only a faint, wispy hum as the 6000CDT extracted data from CDs at 1.4112Mbits/second. The 6000CDT also accepted and ejected discs with precision -- it grasped and pulled in an inserted disc smoothly and quietly, and when I commanded it to release that disc from its clutches, I felt just the right amount of clamping pressure before the disc was relinquished. Such details inspire confidence in a product’s build quality. 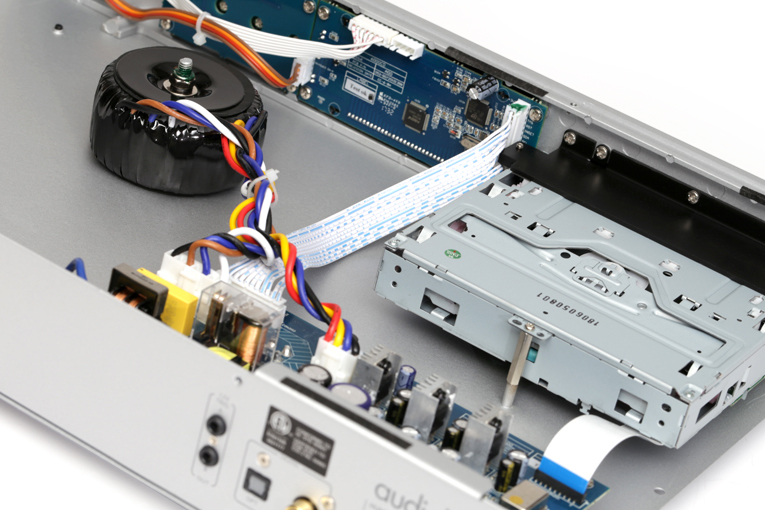 Now for what I did hear. Those of you who’ve read any of my other reviews or articles might guess what’s coming next. For those who haven’t, fair warning: I consider myself a pragmatic, objectively minded audiophile. While I remain open to the possibility that two products that ought to sound the same may in fact not (e.g., a CD transport and the digital section of a music streamer), I would also demand that such a claim be supported with evidence. For example, in the case of very subtle audible differences between two digital products, the evidence I would require to convince me of the factuality of a claim of difference -- even if I’m the one claiming to hear the difference -- would be the results of repeatable single-blind tests. (I realize that double-blind tests are the gold standard, but they’re sometimes difficult to execute.)

In sighted or blind tests, I have never heard differences in the sounds of products delivering a digital signal. I may have thought I heard differences on first listen, but when I listened more, ensuring matched playback levels and repeated rapid comparisons, these differences have always disappeared. So in this section you’ll find no flowery prose about how the 6000CDT “sounds.” Rather, the 6000CDT sounded exactly how I expected any competently designed digital product to sound -- no different from any other competently designed digital product. Any forthcoming aural descriptions can largely be attributed to the source material, my speakers and subs, the room-correction filters, and my room. 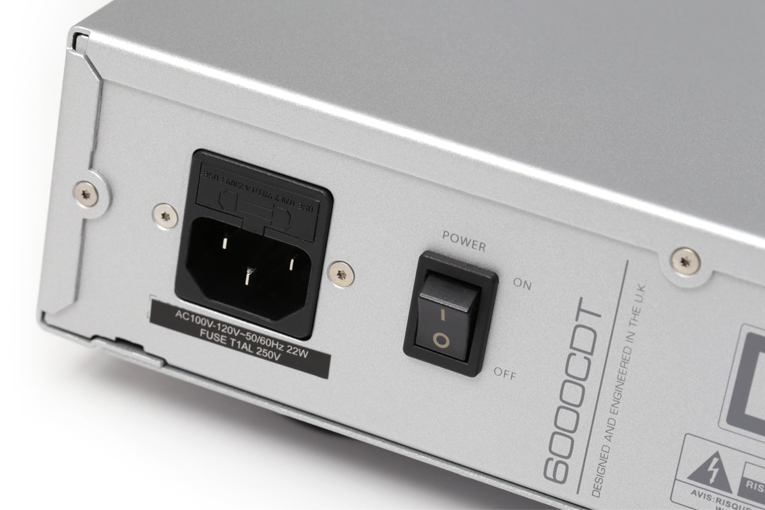 All that said, I listened to numerous CDs played through the Audiolab over a period of a week or so, a few of which I detail below. I also performed fast, repeated, and sighted level-matched comparisons between CD tracks played through the 6000CDT and FLACs of those tracks ripped to my NAS and played through Roon and the Bluesound Node.

“Far Away Like a Radio,” from Colin James’s Limelight (16-bit/44.1kHz FLAC and CD, Maple Nationwide), has a foundation of strong, rhythmic bass supporting James’s powerful singing and bluesy guitar riffs, as well as rich and layered backing vocals. I know this track very well, and everything about it sounded right with the 6000CDT extracting the ones and zeros. The bass was taut, powerful, and fast. James’s lead vocal imaged dead center, the backing vocals behind him and to the right. All the details I’m used to hearing were there, including the baritone subtly contributing to the layered chorus of backing voices. The cymbal crashes had their usual impressively long decays into oblivion. I heard no differences between the 6000CDT’s and the Roon-Bluesound’s playbacks of CD and FLAC, sent through the same DAC in my McIntosh C47.

“Fiddler’s Green,” from the Tragically Hip’s Yer Favourites (16/44.1 FLAC and CD, Universal), is a moving song written by Gord Downie for his sister, whose young son died during the writing of the band’s album Road Apples, on which it first appeared. The Hip rarely performed this deeply personal song, but they did on their farewell tour in 2016, not long before Downie himself died, of brain cancer, in October 2017. The simple arrangement for acoustic guitars reinforces Downie’s powerful singing. Listening to this track through the 6000CDT, I heard nothing out of place or amiss. The plucked guitars had sparkle, decay, and transparency, and imaged exactly where they’re supposed to: to either side of Downie. I could hear all the inner detail in Downie’s voice -- the haunting wails, the rasp, his inhalations, all conveying the pain Downie must have felt when he wrote this song and each time he sang it.

I also focused on soundstaging and imaging, and for this I turned to my go-to track for evaluating these attributes: “Give Me One Reason,” from Tracy Chapman’s New Beginning (16/44.1 FLAC and CD, Elektra). It begins with plucked guitar to left of center, then Chapman’s voice enters dead center, then the drum bass line, with subtle cymbal work just to the right of and behind the guitar, and then a second guitar to the extreme right of Chapman’s lead vocal. Two backing singers occasionally contribute, the first appearing to the right and behind Chapman, the second behind her and to the left. Through the Audiolab, every aural image of instrument or voice was placed exactly where I’m used to hearing it in terms of width, depth, and height. Quick comparisons with the FLAC file via my reference Roon-Bluesound rig again revealed no differences. 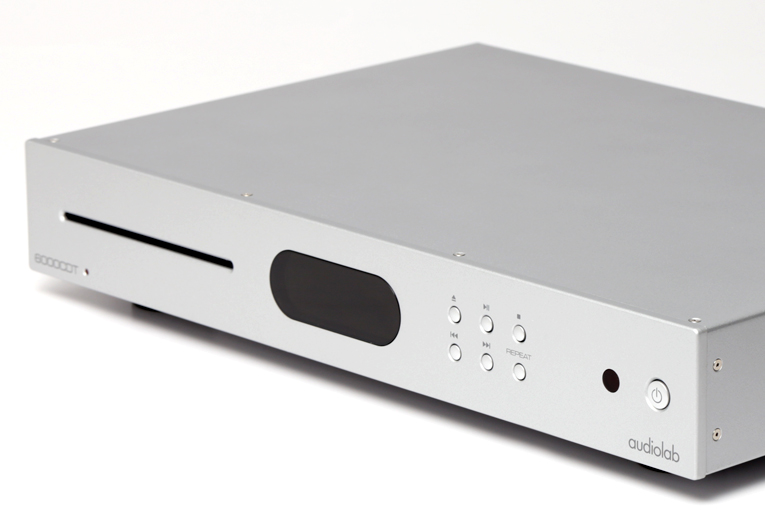 I compared many other tracks from other CDs with my FLAC rips of them, and the result was always the same -- the sounds of these digital sources were indistinguishable from each other.

The Audiolab 6000CDT CD transport retails for $549.99, but from the fit and finish of the case to the feel of the controls to the bright OLED display -- and just like the 6000A integrated-DAC -- it looks and feels like a component that costs twice, maybe even thrice the price. With the exception of its sleek and quiet trayless CD drive, there’s not much to say about features -- the 6000CDT does exactly what you want and expect a CD transport to do. Listening to it, I had nothing to complain about: It had no unique sound of its own, and proved sonically indistinguishable from the FLAC files I’d ripped from those very same CDs and played from my NAS with my Roon-Bluesound Node.

If you’re one of the rare audiophiles still in the market for a CD transport and looking for the perfect aesthetic match for your existing or future Audiolab purchases -- or if you just want a well-made, attractive-looking CD transport to mate with pretty much any DAC -- don’t hesitate to buy a 6000CDT. At the price, it’s a very good value.