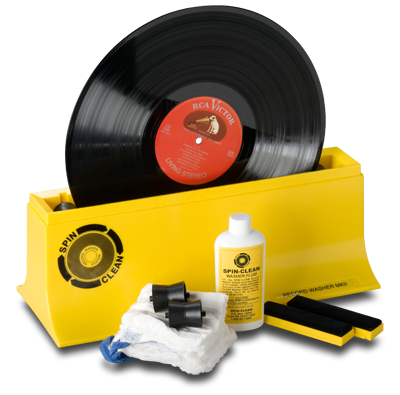 I’m not made of money, but when it comes to record care, I have high standards. The ways in which you can clean your records are legion, and almost all of the good ones are expensive. Even the cheapest vacuum-powered record-cleaning machine out there costs more than a decent pair of bookshelf speakers.

Many years ago, I began my quest for clean records with a basement record-cleaning station stocked with LAST brushes and fluid. Those punky little brushes had a velvet coating on them with a nap so thin that I had to be very careful to not push too hard and scuff up my records with the underlying plastic.

After a while I graduated to an Orbitrac system, which worked way better. With the Orbitrac I could apply more fluid, and the thicker brushes were less likely to ruin my LPs. But the Orbitrac was messy -- it squished fluid everywhere, and when I flipped a record over to clean the other side, I had trouble keeping the cleaned side dry.

Twelve years ago I supplemented the Orbitrac (no longer available) with a well-used Nitty Gritty 1.0 vacuum-powered machine that cost me over $200. The combination of Orbitrac and Nitty Gritty was a huge step upward. The Orbitrac deep-scrubbed my records, and the NG sucked up all the sludge. This was the business.

But even used, this setup cost me nearly $250 all in, and it was still a messy rigmarole: clean one side with the Orbitrac, vacuum that side with the Nitty Gritty, flip it over, repeat entire process for side 2. My cleaning sessions grew fewer and fewer; eventually, I gave them up altogether.

If, like me, you want a single, well-integrated cleaning system that will wash and dry your records, popular opinion says that you’ve got to spend at least $500. Well, I’m here to tell you that it just isn’t so.

I first laid eyes on Spin-Clean International’s Record Washer Mk.II at the 2011 Salon Son & Image show, in Montreal. It costs $79.99 USD. Its main structural element is a bright yellow basin of injection-molded plastic in which you submerge your LPs. The Spin-Clean has a bit of a late-night Slap-Chop infomercial vibe about it -- it would be easy, at first look, to dismiss it as a gimmick that, at best, probably wouldn’t work very well, and at worst might wreck your records.

That would be a mistake. At Salon Son & Image 2011, Mark Mawhinney was demonstrating the Spin-Clean, and its elegant simplicity stopped me in my tracks. As I watched Mawhinney insert an LP, spin it clean (so to speak), pull it out, and dry it, I thought, This has got to work. Instead of rubbing a small amount of cleaning fluid into the grooves and then sucking it out, the Spin-Clean flushes away contaminants with a huge reservoir of fluid. Admittedly, the drying stage of the process -- using a lint-free cloth to wipe off and absorb the fluid -- isn’t exactly elegant, but there’s no real need to vacuum, as there should be no dirt left on the record.

Right then and there, I decided that I had to try this gizmo.

After unboxing my review sample, I took stock of the Spin-Clean and its associated parts. First, there’s the bath basin itself. It’s wider at the bottom, which keeps it stable as you’re spinning records clean. Its rubber feet stop it from skidding around on the table -- a thoughtful touch. Inside I found: a 4-ounce bottle of Spin-Clean’s highly concentrated cleaning solution; two washable, lint-free drying cloths; two brushes; and two rollers. Those rollers, which guide the record as it rotates, can be moved to different positions to accommodate 7”, 10”, or 12” discs. Capping the whole thing off is a lid for the basin, which you can use between sessions should you decide to clean only a few records at a time. The Spin-Clean is made and assembled in Pittsburgh, Pennsylvania.

I picked up a big bottle of distilled water from the drugstore and had at it. First, I filled the reservoir up to the line marked on the bath’s inner surface. Then I inserted the brushes in the vertical slots molded there. I opened the bottle of cleaning fluid and took a sniff -- no alcohol. The instructions stated that I should pour three capfuls of fluid over the brushes and into the bath. I did.

I was still a little nervous about the whole procedure, specifically with regard to soaking the labels as I spun the record, so I press-ganged into service a 101 Strings Orchestra album that one of my mom’s friends had given me when she heard I collected LPs. (That same pile of vinyl also includes Johnny Mathis’s greatest hits, bagpipe marches, and late-’50s soundtracks, should you need to perfect your Spin-Clean technique. C’mon over and pick ’em up.)

The two brushes -- which face inward and scrub both sides at once -- exert a firm grip on the record: Once you’ve pushed the LP down into the bath, you need to apply a fair bit of force to turn it. That force translates into some serious scrubbing action. The instructions state that three clockwise rotations followed by three anticlockwise should do the trick. That seemed just fine to me.

I found it particularly nifty how, while the record is in motion, the fluid seems to stick to the record’s surface without dripping down onto the label. After the requisite six rotations, I yanked out the 101 Strings record and held it horizontally, with one edge of it against my stomach. I dried its surface with one of the supplied cloths, which turned out to be quite absorbent -- a few swipes did the job. I flipped the record over and dried the other side in a jiffy. The result: one incredibly clean record. Its surfaces looked immaculate, and the labels had remained dry. To say that I was pleased is an understatement.

I threw 101 Strings on the floor and went looking for records of real music. I came back upstairs with a few older garage-sale rock finds and -- for when I’d practiced a few more times -- two original Miles Davis albums on Columbia’s “six-eye” label: Kind of Blue and Sketches of Spain. Go big or go home, I say. I took a deep breath and ran Kind of Blue through the Spin-Clean. After thoroughly drying the record, I took it downstairs and played it. I’d already cleaned this with the Orbitrac, but the Spin-Clean got rid of a whole pile of ticks and pops that I’d thought were permanent residents.

Next up were a bunch of seriously grimy garage-sale refugees that I’m not sure why I bought in the first place and hadn’t bothered to clean. By now I’d cleaned about eight records, none of them really dirty, and the fluid still looked fine -- a tiny bit of debris at the bottom of the bath, but nothing worrisome. But eight or so genuinely grimy records later, the fluid was looking pretty grungy. I estimate that 15 or so filthy records would be the limit before I’d want to replace the cleaning fluid. Spin-Clean’s estimate of 50 records might well be achievable with LPs that are already reasonably clean.

After ten records, the two supplied drying cloths were too wet to be of much use. I plan on picking up a bunch more cloths. I imagine that fluffy microfiber towels would be ideal.

The Spin-Clean is quiet -- a huge improvement over the cyclonic howl of my old Nitty Gritty machine. There are only two downsides that I can see. First, the primitive method of drying is extremely inelegant, if quite effective. Second and more important, you can’t easily rinse the cleaning fluid off the record, which means that a thin layer of whatever surfactants Spin-Clean puts in their fluid may be left on the record’s playing surfaces after it’s been dried.

There are two ways to look at this. Obviously, you have to care about that residue, but I’m not going to worry about it -- there are too many more important things going on in my life. A Spin-Cleaned record is so much cleaner than one that hasn’t been through the sheep dip that, from my point of view, a molecule or two of surfactant is not even a consideration. To be perfectly honest, I really think that a post-Spin-Clean record is cleaner than any vacuum-cleaned record, so your choice is way less dirt, or a possible molecule of surfactant. Further, Spin-Clean’s fluid seems incredibly mild, and it’s diluted; I think it’s not worth worrying about. The Spin-Clean system seems to rely on high brush pressure and a vast reservoir of juice to do the heavy lifting, which means that a powerful cleaning fluid isn’t necessary.

But if you were toilet-trained way too early, you could easily drain the bath after you’ve done a bunch of records, refill it with pure distilled water, and give each record another rinse. And if you’re really gung-ho, you could buy two Spin-Cleans and place them side by side, one filled with cleaning solution, the other with just water. Should you go this route, you’ll still have change left from $200 -- it’s cheaper than any comparable system.

Your level of record-cleaning obsession is up to you. I’m more than happy to use a single Spin-Clean and worry no further. For $79.99, the Spin-Clean Record Washer Mk.II is a smokin’ deal. It does a fantastic job, it’s easy to use, it’s quiet and sanitary. I’m thrilled with it.